For its first four minutes, Tom Krell’s voice is the only thing connecting “What Is This Heart?” to his last two albums under the name How to Dress Well. It appears bare over acoustic guitar and distant trickles of piano — no real atmospherics, no beats. His lyrics emerge newly clear, detailing painful memories of familial mistreatment. No more shrouds — the echoes and misdirections that used to signify How to Dress Well have been cut down.

Krell steps out of the shadows on his third album, but of course he hasn’t let go of the sadness that’s colored the project to date. He’s just less sly about it. Despite its title’s enigmatic punctuation, “What Is This Heart?” dances around nothing. Krell’s lyrics reveal themselves to be surprisingly blunt now that they’re centered. From its tentative first minutes to its fireworks-display resolution, the album luges down a clear, stable emotional narrative. Krell leaves himself fewer ironies to play in, and while he’s hewn a pile of pretty songs here, it’s hard not to miss the surprises and depths hidden inside 2012’s Total Loss.

Krell has more or less excommunicated himself from (PB)R&B in favor of open pop, and the best moments on “WITH?” come when he selects his moves precisely. On “See You Fall”, he rounds off the end of each line with a pitch-shifted echo of his own voice, the word “fall” flanked by a low menace. The twitchy piano in the background strains against the song’s tempo, as if urging it to get off the ground and run, which it does. Later, “Pour Cyril” pushes its strings into overdrive; Krell deliberately forces them through bad speakers, decaying the song’s fidelity as if his faith in the song’s words (“no pain in this love, no shame in this love”) were decaying along with it. It’s brave to flirt with badness now that How to Dress Well has access to so much sheen.

That sheen does pile up in places. “Precious Love” keeps some fuzz around in its beat, but it sums up its own conceit in the title, as though there’s not already a surfeit of big, shiny pop songs about how love is precious. The quasi-dance number “Very Best Friend” doesn’t bone up with enough melody to support its heavy gestures, like the bristling synth strokes or the words “You’re my baby, want you to have it all/ Want you to have my baby, please don’t be appalled.” Earlier in the song, Krell sings, “I know I can be extra sentimental.” I’m not sure he needs to make the admission. 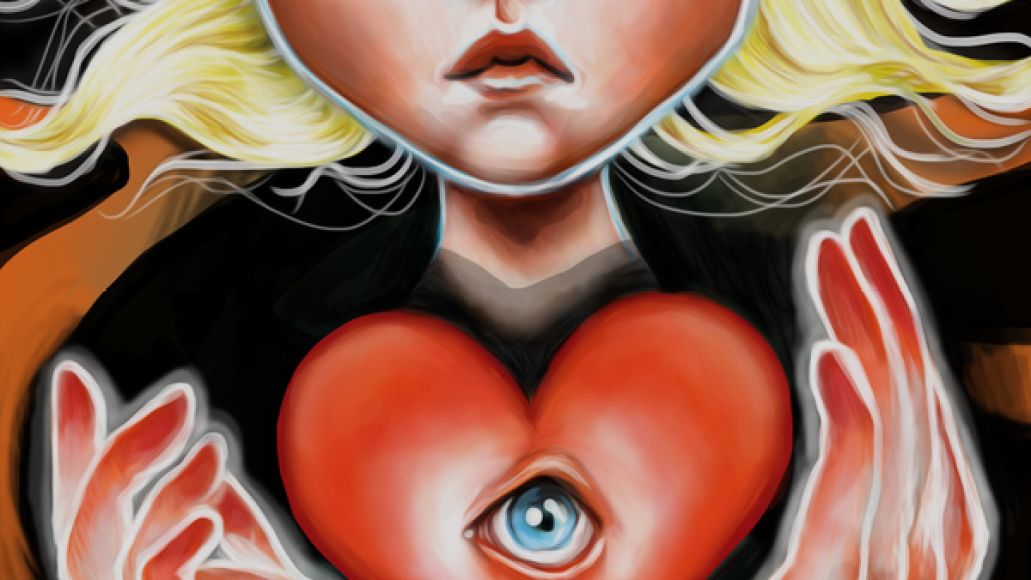 “WITH?”‘s darker side also feels crafted with heavy hands. The spooky “Face Again” boils over with lines like “I look into the future and see just so little light,” while the same pitch-shifted specter that delicately tips “See You Fall” stomps in with the warning, “They’re coming straight for you.” For an album that navigates the distance between the totalizing want for love and totalizing fear of it, “WITH?” suffers at its poles.

But some kind of magic happens when Krell meets himself in the middle. On “Childhood Faith in Love”, he attempts to reconcile his innocent ideal of true love with the trauma that’s contaminated it over the years, and it skips along with an urgency unlike anything in How to Dress Well’s discography to date. “Everything was changing,” he repeats, and his voice changes, too, flipping around through unnatural octaves on the third word. By the climax, he’s singing through sheets of distortion while an electric guitar wails against him. The song has the feel of a spontaneous confession bursting through of its own volition.

(In Photos: How to Dress Well at New York City’s Slipper Room)

By the time he arrives at “House Inside (Future Is Older Than the Past)”, Krell launches his attempt to reconcile ultimate pain with ultimate love skyward. “I don’t understand how this world could hold all this pain,” he sings. It’s a naive line, but it’s also a sweet one. Most singers understand it a little too well. And then he hits on something: “The future is older than the past/ Every new day carries the weight of the last.” With pop punk enthusiasm, Krell counters the notion that tomorrow is always a new day. Tomorrow is new, and that only makes it harder, he retorts. Tomorrow will be a day when we’ll all have suffered a little more.

If we’re lucky, though, we’ll all have loved and been loved a little more, too. That’s the note “WITH?” ends on. For the length of “WITH?”, Krell lets the dark and light sides of himself do battle, and finally he lets the latter win. “You came back for me/ It’s such a pretty, pretty thing/ This world is such a pretty thing,” he sings as the rest of the music drops out. He comes full circle, a voice against the blankness. This heart is something hopeful.

Essential Tracks: “See You Fall”, “Childhood Faith in Love (Everything Must Change, Everything Must Stay the Same)”, and “House Inside (Future Is Older Than the Past)”

Album Review: How to Dress Well - "What Is This Heart?"