Here’s Ghost B.C., a metal band who have a very high quality of life because they hail from Sweden, a wealthy country.

Though heavy metal originated amist working class youths in the U.S. and U.K., new socioeconomic trends have shown a relationship between the number of heavy metal bands and a country’s wealth and standard of living. According to The Atlantic’s City Lab and the Martin Prosperity Institute, the number of heavy metal bands in a given area is positively associated with, “economic output per capita; level of creativity and entrepreneurship; share of adults that hold college degrees; as well as overall levels of human development, well-being, and satisfaction with life.”

For their report, the researchers used a widely-circulated map (below) documenting the number of heavy metal bands per 100,000 people. The chart came from the exhaustive online metal database Encyclopaedia Metallum along with numbers from the C.I.A.’s World Factbook. 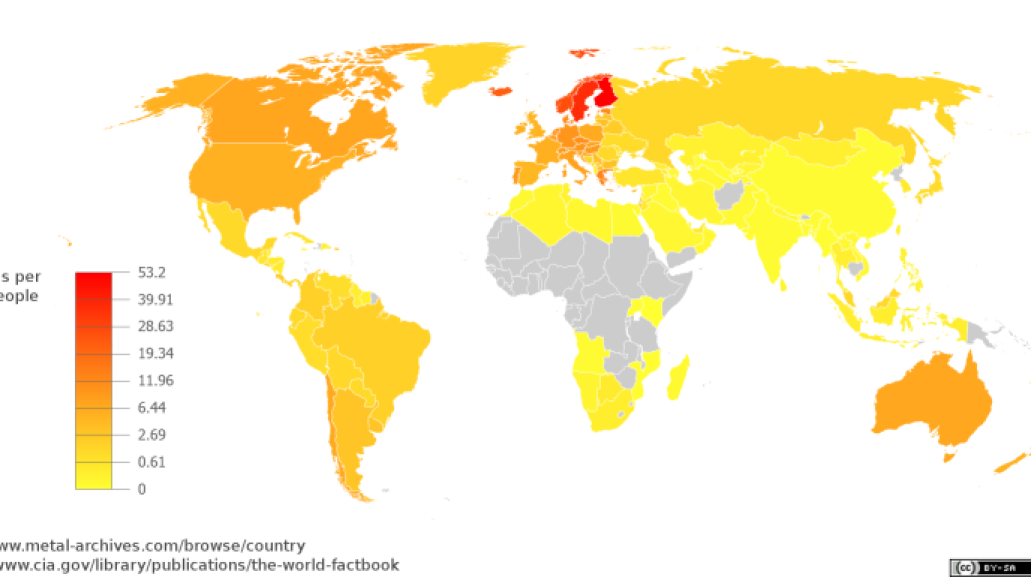 But as for the direct cause of this relationship, between the number of heavy metal bands and a country’s wealth, the answer isn’t entirely clear and is likely due to a wealth of contributing factors. Martin Prosperity Institute’s Charlotta Mellander, who is Swedish, posits that the number of heavy metal bands is due to Scandinavian governments’ “efforts to put compulsory music training in schools, which created a generation with the musical chop to meet metal’s technical demands.” As City Lab notes, this may be the reason why the Swedes have also gotten so good at making pop music.

Another explanation comes from writer Mark Ames, who thinks the rise of metal in Scandinavia comes from a reaction to a “completely humorless” and “deeply oppressive society”, that manifests itself in a “recognizably bland, caring, pious, Social Democratic way.” Others like, Jason Rentfrow, Lew Goldberg, and Dan Levitin found in 2011 that liking heavy metal is an “intense music preference” and is usually found in participants with “rebellious” traits.

Researchers Richard Florida and Mellander, summarize their findings by saying, “Though metal may be the music of choice for some alienated working-class males, it enjoys its greatest popularity in the most advanced, most tolerant, and knowledge-based places in the world.” They conclude, “while new musical forms may spring from disadvantaged, disgruntled, or marginalized groups, it is the most advanced and wealthy societies that have the media and entertainment companies that can propagate new sounds and genres.”

Countries where heavy metal is popular are more wealthy and content with life, according to study