This week’s Dusting ‘Em Off takes a visit to Spook Central, where the 30th anniversary of Ghostbusters is currently being celebrated. Consequence of Sound‘s own boys in gray — ahem, Michael Roffman, Justin Gerber, Ben Kaye, and McKenzie Gerber — take a look back on the iconic film’s equally iconic soundtrack. From Mick Smiley to the Thompson Twins, Elmer Bernstein to Ray Parker, Jr., it’s a 3,500-word nostalgic trip back to a time when Kenner action figures were all we wanted and Bill Murray still enjoyed the franchise. 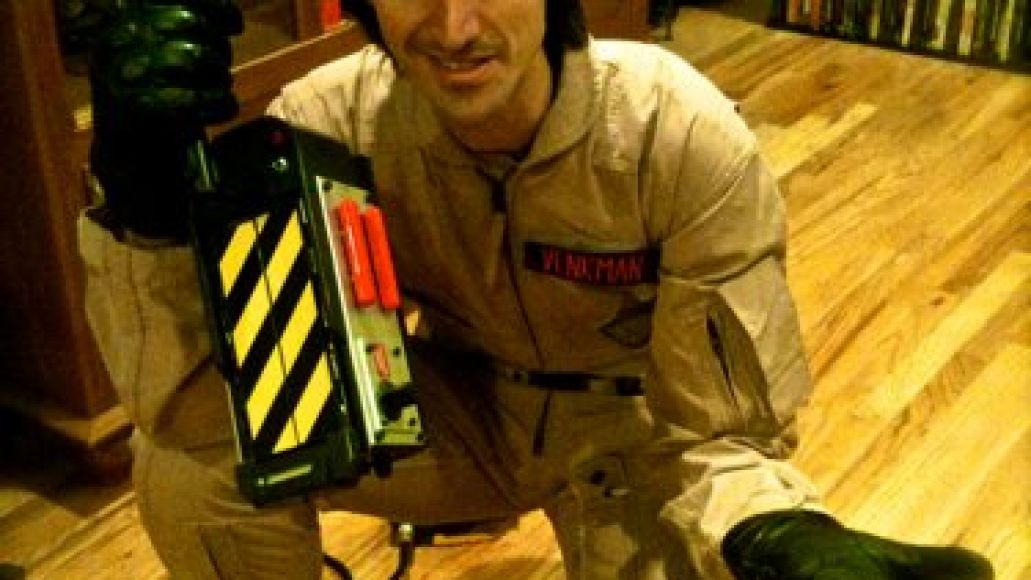 Michael Roffman (MR): I always look at Ghostbusters as a barometer for my age. I was born the summer it came out, and I became obsessed with the franchise some three years later. Just the name of the movie sparks memories of a chewed-up Peter Venkman toy, my Stay Puft plush toy, and the carton of slime my mother never let me open, which I secretly took outside to empty on my tree house for effect. Similarly, I think of the music. In fact, I don’t see a frame of the film when “Ghostbusters” is muttered, but instead Elmer Bernstein’s creepy, at-times-hilarious score, and, well, quite possibly the dumbest song of the ’80s — Alessi’s “Savin the Day”. Mac, one of the first times I knew you were a pop culture junkie was when you were able to sing along with me. (Listen to it again. The vocalist hits some notes that are very Gerber-friendly. Sorry, Justin.)

Looking at the soundtrack again — I own it on vinyl, which only adds more dust to these sneeze-worthy songs — I forget how eclectic this album really was at the time. But also how telling of the times. The Bus Boys’ “Cleanin’ Up the Town” into the aforementioned track by Alessi kind of sums up how varied the ’80s could be: either an obsession with ’50s honky tonk or the standard new wave. They also strung together a couple of powerhouse acts, again for the time, like Thompson Twins and Air Supply. Then there’s the classic theme song by Ray Parker, Jr. which we’ll get to eventually. Spoiler alert: I loathe that song.

So, what memories do you have of this one?

Having two brothers, Ghostbusters was a brilliant movie to grow up with, in hindsight. Whether or not I knew to be excited at the time, I’m fairly certain I was assigned the role of Egon Spengler in my house. Justin was Peter Venkman, and my twin was Ray Stantz, I believe. There was a role for everyone, and every part of the team served their purpose, much like this eclectic album.

One of the earliest memories I have with the soundtrack was jamming out to Ray Parker, Jr.’s “Ghostbusters” on a Halloween tape cassette that also featured Michael Jackson’s “Thriller” and that kid’s song “The Purple People Eater”. As for the soundtrack, the songs strangely fit the film, serving as a proper introductory piece for what a strange ride the film offers.

Parker, Jr.’s lyrical hook of “Who ya’ gonna call?” is now iconic, but also genius. It’s essentially a commercial jingle that’s become a hallmark of pop culture. There’s no other answer to that question than, well, you know.

Justin Gerber (JG): Parker, Jr.’s “inspiration” was Huey Lewis and the News’ “I Want a New Drug”, although Lewis and his Newsies certainly didn’t see it that way. Parker was sued by the band and later settled out of court.

Mike, how can you loathe the theme song? It’s a classic!

My memories of the soundtrack are nearly as strong as the endless number of quotable lines (“The flowers are still standing!”). As a young boy growing up in the suburbs of Royal Palm Beach, I was freaked out by Mick Smiley’s “Magic” because I always associated it with the rotting corpse of a cab driver who appears as all hell is breaking loose. The streams of spirits circling Dana’s apartment complex frightened me just as much as when the Ark’s spirits circle the Nazis in Raiders of the Lost Ark.

On the brighter slime of things: The BusBoys’ “Cleanin’ Up the Town” helped calm my nerves after the amazing reveal of the library ghost. Side note: The inclusion of this song must have been demanded by blues enthusiast Dan Aykroyd, right? That song screams “Brunch at House of Blues”.

MR: Look, “Ghostbusters” will always be a classic song to our generation, namely because we grew up when it was such a sensation. No kidding: Go watch the video again and count the number of celebrity cameos that pop up. Chevy Chase, Jeffrey Tambor, Irene Cara, Ollie E. Brown, John Candy, George Wendt, Al Franken, Peter Falk, Danny DeVito, Melissa Gilbert, Carly Simon, and Teri Garr — the producers did a fine job in turning this into a spectacle. So successful that it even nabbed an Academy Award nomination the following year. It’s ridiculous when you really think about what it’s all about lyrically: a commercial jingle for a blockbuster song. Call me a prick, but I’m willing to bet the song will go the way of “Monster Mash” in decades to come, if it hasn’t already.

I guess I wouldn’t mind it so much if Parker, Jr. wasn’t so goddamn hammy. I know that’s the point, but the whole “I can’t hear you” banter is so pandering, especially outside of the movie. During the film — specifically, during the iconic montage and the closing finale — I don’t mind it. The way they take out certain elements and work in the chorus or the verse, coupled with quotes from Casey Kasem or Larry King, it’s just great. In those moments, the song assumes a heroic personality, thanks to the environment that’s been crafted, and I’m okay with it being hammy and over-the-top and slightly annoying … probably because my focus isn’t on it. Instead, the song becomes a cue, a Pavlovian layer of the flashy ’80s gloss that made me oh-so hungry to buy Ghostbusters cereal, or Kenner action figures, or neon green shirts.

Actually, that’s something I think is unavoidable when discussing this soundtrack, and especially this film. To date, it remains one of my favorite comedies of all time, tied alongside Back to the Future and Caddyshack. Wouldn’t you know, all of those films have specific branding elements that really grabbed us as kids: one has a shiny Delorean, the other a cuddly gopher, and together lame-yet-addicting anthems in Huey Lewis and Kenny Loggins, respectively. It’s not a revelation that producers of the ’80s knew how to market and package their films, but it’s telling that these films continue to live in our lives, no thanks to TBS, and these songs (“Ghostbusters”, “The Power of Love”, and “I’m Alright”) will always perk our ears up in the right way. I guess what I’m saying is: I hate these songs, but I love what they’re tied to … and because of that, I’ll never really consider them insufferable like, say, “Humans Being” from Twister or “Til I Hear It From You” from Empire Records. 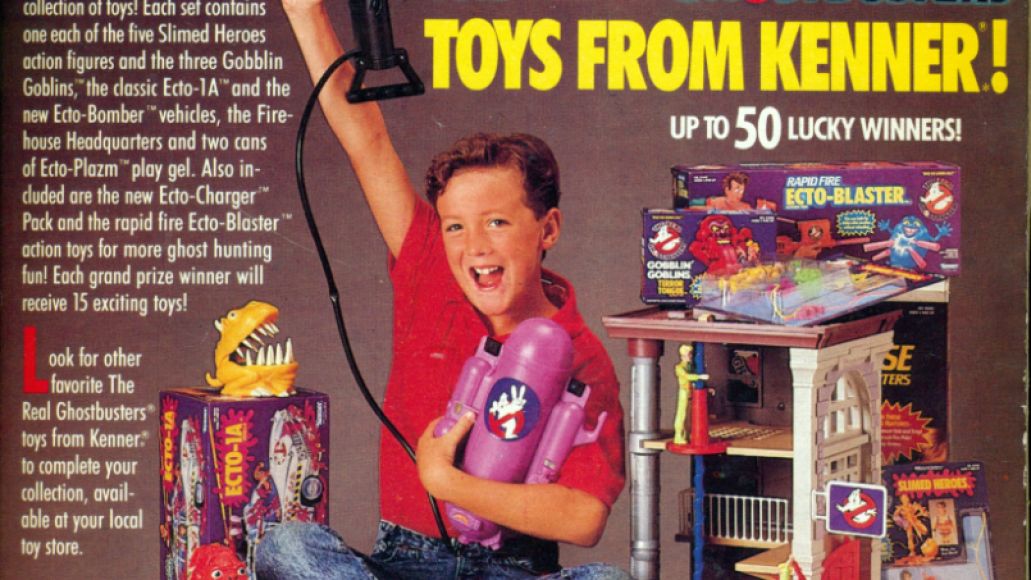 This is probably too early to bring up now — we’ve only scratched a handful of songs on here — but why do you feel soundtracks today are no longer as varied and distinguished as they are here? Sub-question: Why do so few films follow this model anymore? I can think of two franchises that continue to do this: Spider-man and Transformers. Do we prefer them to avoid the soundtrack? Personally, I think it usually comes off as a shameful marketing ploy, but if it’s done tastefully — like, say, in Adventureland (admittedly, not a great example given that it’s an indie drama and not a summer popcorn flick) — I do find myself hitting up iTunes or Spotify for the soundtrack.

MG: Uh … there’s nothing like the cool stylings of Air Supply’s “I Can Wait Forever”.  Kidding aside, Roffman, you bring up a damn good question as to why films have given up on The Soundtrack. The answer? To quote Venkman, “I don’t know, I don’t know…”

Maybe it’s because the Internet is the world’s source for new music and studios don’t feel the need to shell out the big bucks to have a hit number carry their films? I really don’t know. Looking back, the last blockbuster I can remember to successfully issue an agreeable diverse soundtrack was 1995’s Batman Forever.

Though, I can’t complain. I’ve always been a bigger fan of scores than soundtracks. With Ghostbusters, you have the best of both worlds, even though so much of Elmer Bernstein’s score is missing. I would have loved to own the music from that Judgment Day Scene between Winston Zeddemore and Ray as opposed to, say, Thompson Twins’ “In the Name of Love” … which, really, I can’t recall being in the film at all.

But now it’s moot considering they finally put the whole score out there awhile back.