During the Cold War, the Soviet Union was a place filled with restrictive laws and extreme xenophobia. So, it’s not surprising that Communist officials would want to control just what music was broadcast on government-sanctioned radio stations. The reasons why they wanted certain songs banned, however, are what’s most surprising.

Uproxx has unearthed a list with the translated title “The Approximate List of Foreign Musical Groups and Artists Whose Repertoires Contain Ideologically Harmful Compositions”. Within this list, Communist officials presented the various obscenities and indiscretions that merited the likes of AC/DC, Donna Summer, Talking Heads, and Judas Priest, among others, an outright banning.

For instance, Black Sabbath’s “Violence and Religious Obscurantism” were issues, as was Julio Iglesias’ “Neofascism”. (Wait, what? How is this neofascist?) Also, what’s the distinction that led to Tina Turner being banned for “Sex” but Summer for “Eroticism”? The Village People promoted “Violence”? I mean, I suppose you could say “In The Navy” was a war song, but really?! While most of the acts doubled up with “Violence”, it seems simply being “Punk” was obscene enough to ban the Sex Pistols, The B-52s, Madness, Strangers, and The Ramones.

The full document provides a good laugh, sure, but some Russians might think it still hits a bit close to home. Read part of the translated memo below. 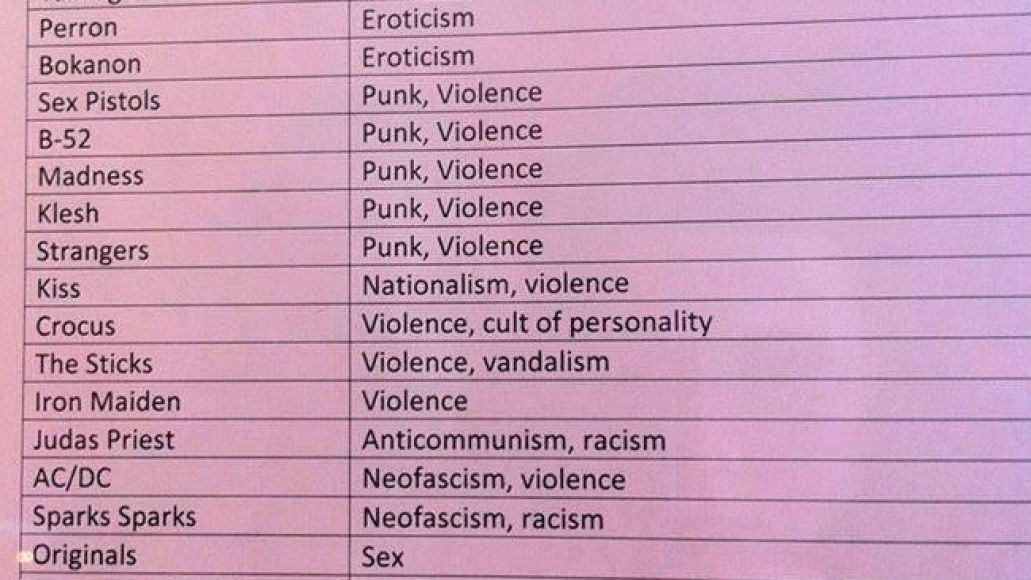 Here's what music was banned in the Soviet Union, and why