Last week, Lana Del Rey shared some rather disturbing thoughts in a new profile by The Guardian. Amongst the interesting quotes was an anecdote about how she and Lou Reed were scheduled to meet up and record on the day that he died. But the real story to gain traction was her morbid perspective on mortality, specifically her obsession with early death.

“I wish I was dead already”, she told Guardian writer Tim Jonze, while discussing the late Kurt Cobain and Amy Winehouse. Jonze immediately told her not to say such a thing, but Del Rey bluntly responded, “I do! I don’t want to have to keep doing this. But I am.” When questioned about what she meant exactly by this, she confessed, “Everything. That’s just how I feel. If it wasn’t that way, then I wouldn’t say it. I would be scared if I knew [death] was coming, but…”

Now, as MTV points out, Del Rey has responded via her Twitter account, harshly criticizing both the piece and the writer. In a series of tweets that have since been deleted, she takes aim at the publication, saying, “i regret trusting the guardian- i didn’t want to do an interview but the journalist was persistent.” She added, “Alexis was masked as a fan but was hiding sinister ambitions and angles Maybe he’s actually the boring one looking for something interesting to write about. His leading questions about death and persona were calculated.” 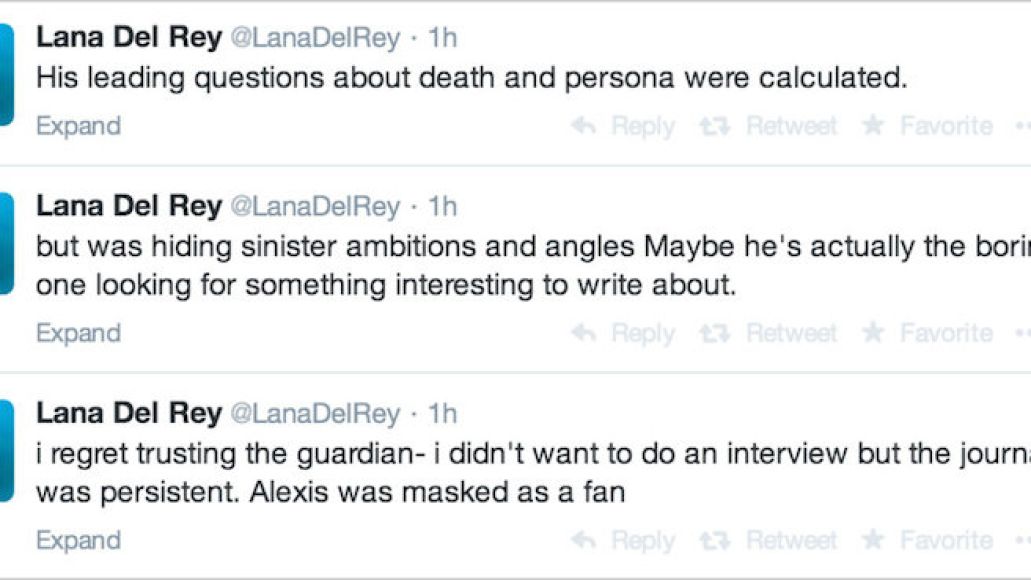 Here, it seems Del Rey wrongly attributes “Alexis” — presumably referring to The Guardian‘s Alexis Petridis — as the writer of the feature in question. Petridis wasn’t involved with the interview, but did publish a semi-positive review of Ultraviolence.

The actual writer behind the feature, Jonze, has since issued his own statement regarding Del Rey’s accusatory tweets and, as Pitchfork notes, has even uploaded audio of the now-infamous “I wish I was dead” quote. Below, check out a portion of his essay and listen to that soundbite.

Besides the fact Lana doesn’t remember who actually interviewed her, there are a number of things about her statement that sound a bit iffy to me. She may well have not wanted to do the interview but it certainly didn’t seem like it – she was delightful company for the 70 minutes we spent talking, and was happy to continue over the allotted time when the PR knocked on the door, an hour in, and asked how we were getting on. I was not “masked” as a fan, I genuinely like her music and really liked her too – her life story is fascinating, she was refreshingly open when answering even the most difficult question and she seemed completely in love with music. As for the rather vague “sinister ambitions” she claims I had – well, my colleagues sadly refused to comment on how sinister I am, but they were all adamant that I’m “not in the slightest bit ambitious”. Thanks, guys.

It’s not pleasant asking a pop star if she thinks the idea of dying young herself is attractive – it’s a dark question, but it’s not a leading one. She has every opportunity to say no. And she can hardly complain about the subject matter: she’d been talking about her icons all dying young, she named her debut album Born to Die and had spent much of the 50 minutes previous to this point telling me how miserable she was.

Ultimately, the problem with Lana’s complaint is that she doesn’t seem to know what she’s actually complaining about. She’s not alleging that I made up her quotes, nor is she claiming that they’ve been “twisted” or that we’ve printed them out of context. Instead she seems annoyed by the fact I wanted her to say interesting things and asked questions that caused her to do so. Well sorry, Lana, but that’s just me doing my job.

Despite all the controversy, Ultraviolence is out now and it’s very good.