Spruce up your resumes, kids. Wu-Tang Clan are looking for some social media interns and have taken their ever-important search to an equally prestigious platform: Craigslist. Proceed carefully, though, as the details of their ad might not be all that glamorous.

The hip-hop collective and their management have a long list of demands and duties for the new recruits. So, just how much C.R.E.A.M. might you pull in from manning Shaolin’s social media? Try zero/zilch/nada for such work. Oh, and don’t forget that things will only get busier once Wu’s multi-million dollar album finally drops.

“We are looking for individuals that are able to set appointed times thorough the day to do social media updates and stay consistent with posts,” the posting notes. “The perfect candidate would be someone that is available for various events to document footage and pictures on all social media outlets i.e Facebook, Twitter, Instagram, etc.” 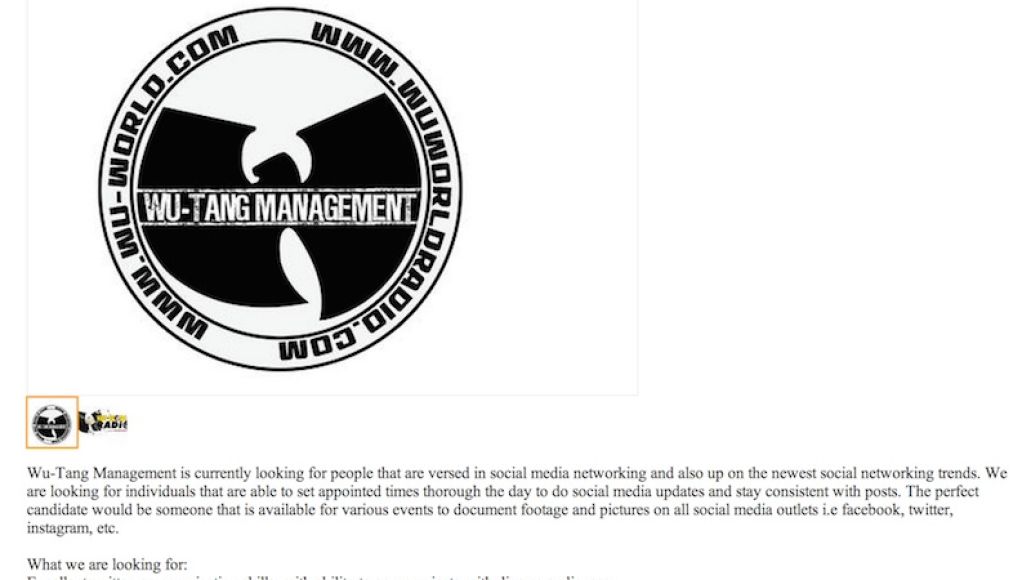 For what it’s worth, this isn’t the first time Wu-Tang have used the sketchy website for hiring purposes. Back in 2011, they also placed a listing for interns.

Those two newborns who were recently named Raekwon and Ghostface Killah seem like perfect candidates for the job, but me thinks they might lack a little in the experience department. That being said, get crackin’ on those cover letters!