On the personal front, more misfortune. Five days after my family gathered for what would have been my grandfather’s birthday had he not died in February, we learned the dog has cancer. Then an uncle died following a lengthy terminal illness. Brothers moved away, a hotel stay involved in a strange brush with death.

Ultimately, I’ve spent more time thinking about death, illness, and state-sanctioned brutality this summer than going to the beach — and so I found myself in the perfect mood to revisit, on its 20th birthday, the Manic Street Preachers’ The Holy Bible, perhaps the world’s most popular album ever to contain songs about anorexia, the Holocaust, and Joseph Stalin.

It’s a heavy one, and I found myself listening to it, soaking in lyricist Richey Edwards’ harrowing chronicles of misery, more intently than I have since I was a teenager, when I discovered the record on the strength of UK magazine write-ups and reviews on Epinions.com, of all places. Back then, I didn’t know the Manics were all but unheard of stateside. I hadn’t yet discovered, say, Swans or Nick Cave, and so The Holy Bible seemed like an absolute end of the line in terms of dark, depressing music — an immense how-to in making a brutally uncompromising howl of a record. I certainly couldn’t imagine its spoken-word samples and tinny, britpop-gone-evil guitar solos might ever sound dated. Even still, this is heavy, frightening shit, and in terms of sheer force and directness, it remains unequaled — certainly by Edwards, who went missing in early 1995 and is now presumed dead, and by the Manics, who shifted gears in a sunnier, less political direction. 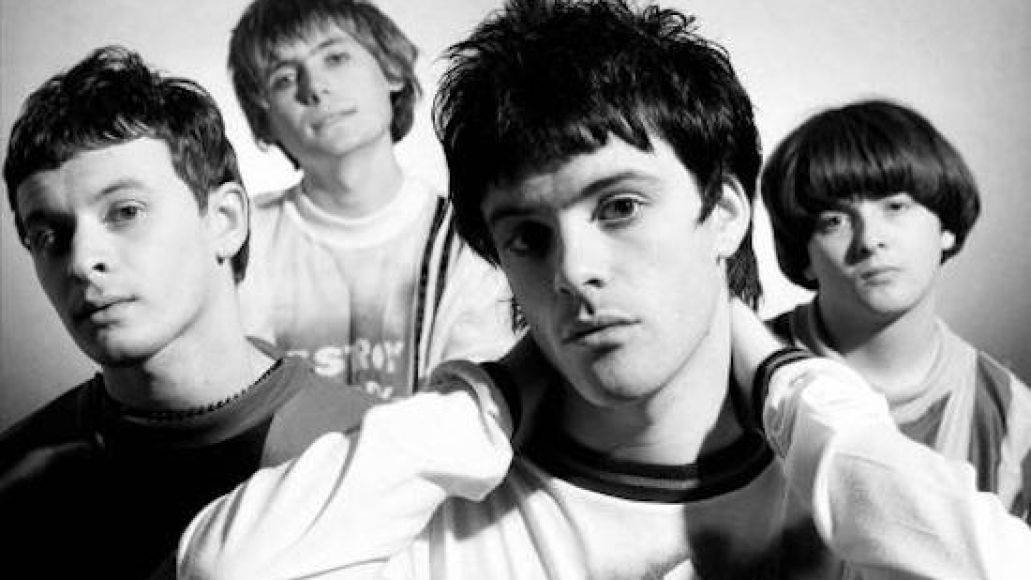 Two decades later, Manic Street Preachers are preparing to resurrect these songs for a twentieth anniversary run. In appreciation of this chilling opus, we’ve compiled a by-no-means-exhaustive encyclopedia of atrocities chronicled throughout its tracks. If any summer could use the look back, it’s this goddamn one.

AMERICAN IMPERIALISM noun, əˈmerikən/ imˈpi(ə)rēəˌlizəm/. Probably no song in rock history gives away its meaning as readily as the title of “Ifwhiteamericatoldthetruthforonedayit’sworldwouldfallapart”, a weirdly catchy attack on neoconservatives, does. The US is called out in particular for a history of moralistic intervention: “Grenada, Haiti, Poland, Nicaragua/ Who shall we choose for our morality?” Don’t miss the McDonald’s shout-out.

ANOREXIA noun, \ˌa-nə-ˈrek-sē-ə. Presumably autobiographical — and named after the weight that’s likely to result in death for an anorexic patient — “4st 7 Lbs” is the most chilling account of an eating disorder ever set to music. “I wanna be so skinny that I rot from view,” Bradfield sings, though it’s clearly Edwards speaking through his voice. “I want to walk through the snow and not soil its purity.” The lyrics grow increasingly graphic from there, though they never capture the anorexic mindset with more chilling precision than that chorus.

CAPITOL PUNISHMENT noun, \ˈka-pə-təl ˈpəniSHmənt/. “Archives of Pain”, which Bradfield once described as “very right-wing,” lists serial killers and then endorses their being put to death: “Execution needed/ A bloody vessel for your peace/ If man makes death then death makes man/ Tear the torso with horses and chains.” Fun! If you’re going to choose a menacing bass line to go along with this stuff, you couldn’t have chosen a better one.

COMMUNICATION BREAKDOWN noun, kəˌmyo͞onəˈkāSHən ˈbrākˌdoun/. Richey Edwards was evidently fascinated by the failures of language. On “P.C.P.”, he devotes an entire song to it; on “Faster”, he chronicles how words are twisted and reinvented by political opponents: “I am an architect/ They call me a butcher/ I am a pioneer/ They call me primitive.”

DEATH noun, \ˈdeth\. Lol, literally every song. Perhaps the most notable use of death is “Die in the Summertime”, about an old man wanting to die while thinking of his youth.

DICTATORS noun, ˈdik-ˌtā-tər, dik-ˈ. The Holy Bible takes an odd fascination with tyrants of the distant — or not-so-distant — past. “Of Walking Abortion” contains some of the album’s most nightmarish imagery (“Mussolini hangs from a butcher’s knife/ Hitler reprised in the worm of your soul”), while the brief, punk-y “Revol” makes historical name-dropping its own song: Lenin, Stalin, Kruschev, Brezhnev, and so on and so on. As Edwards explained the song: “If men of the calibre of Lenin and Trotsky failed, then how can anyone expect anything to change?”

TIPPER GORE proper noun, /ˈtɪpə(r)/ /ɡɔː(r)/. The Manics’ fixation with the vice-presidential wife, who is repeatedly name-checked in “Ifwhiteamericatoldthetruthforonedayit’sworldwouldfallapart”, is unclear, but it likely has something to do with her ’80s campaign against explicit lyrics in rock music.

THE HOLOCAUST proper noun, thə \ˈhō-lə-ˌkȯst. Some bands turn to romantic pursuits for inspiration; the Manics took a trip to the sites of concentration camps at Dachau and Belsen. The Nazi obsession appears most prominently on “Mausoleum”, which contains the timeless couplet “Wherever you go I will be carcass/ Whatever you see will be rotting flesh,” and “The Intense Humming of Evil”, a slow march of Nuremberg Trials samples and doomy industrial clatter. The latter track reportedly went back to the cutting board when singer James Dean Bradfield complained that it was too “ambivalent” about the Holocaust. “Of Walking Abortion”, meanwhile, also contains a Hitler mention.

NIHILISM noun, \ˈnī-(h)ə-ˌli-zəm A single, defining line from “Faster” — “I know I believe in nothing, but it is my nothing!” — seemed a defining life philosophy for my angsty 14th year.

PC adjective, pee-see. The final track, “P.C.P.”, is not about the drug but instead a strange rant against political correctness — reminding us that the Manics’ political instincts were never so simple as our modern left/right-wing breakdown. “Systemized atrocity ignored/ As long as bilingual signs on view” is how the band characterizes political correctness, which they seem to have regarded as a near-fascist control over language. “A lot of PC followers take up the idea of being liberal, but end up being quite the opposite,” Nicky Wire told Melody Maker in 1994.

PROSTITUTION noun, \ˌpräs-tə-ˈtü-shən, –ˈtyü-. The Holy Bible opens with a particularly lurid account of the prostitution trade. The band casts its grim eye on both the power relations involved (“Power produces desire/ The weak have none”) and the uglier physical details (“You want a girl, so chop off his cock”). Such prostitutes comprise “the nation’s moral suicide,” Bradfield assures us on “Of Walking Abortion”.

REAGAN proper noun, ˈreɪɡən/. Turns out this band wasn’t such a great fan of the ol’ Gipper. “Ifwhiteamericatoldthetruthforonedayit’sworldwouldfallapart” opens with an audio sample of an invite to view a gala in celebration of the former president, then spends the rest of its lyrics blasting American exceptionalism, consumerism, and war. There’s nothing quite like James Bradfield’s pronunciation of “moral MUH-JAH-RIT-TY!”

SELF-HARM noun, \ˈself \ˈhärm\. Anyone halfway familiar with Richey Edwards has heard the “4 REAL” story. No wonder, then, that the songwriter’s self-destructive tendencies appear in Holy Bible‘s lyrics. “4st 7lb” chronicles a struggle with anorexia, from the perspective of one who finds “such beautiful dignity in self-abuse,” while “Die in the Summertime” opens with some especially sunny imagery: “Scratch my leg with a rusty nail/ Sadly it heals.” “Can’t shout, can’t scream/ I hurt myself to get pain out,” Bradfield sings in “Yes”.

SERIAL KILLERS noun, \ˈsir-ē-əl\ \ˈki-lər\. The aforementioned “Archives of Pain” rattles off a handful of serial killers (Jeffrey Dahmer, Dennis Nielson, Yoshinori Ueda, and others) and rails against their glorification. “Give them the respect they deserve,” the band demands — apparently referring to execution.

SEX noun, \ˈseks\. In the world of The Holy Bible, sexuality is inextricably bound with pain and loathing. “There’s no part of my body that has not been used/ Pity or pain, to show displeasure’s shame,” Bradfield sings on “Yes”, a frightening, gender-bending chronicle of prostitution. “Faster” features this frightening bark: “The first time you see yourself naked you cry!”

TOTALITARIANISM noun,  tō-ˌta-lə-ˈter-ē-ə-ˌni-zəm\. The Holy Bible is obsessed with control — over one’s body (“4st 7 Lbs”), over language (“P.C.P.”), and over political subjects. “Of Walking Abortion” takes political totalitarianism as its subject; Nicky Wire described it as “the worm in human nature that makes us want to be dominated.”

WEIGHT noun, wāt/. The Holy Bible offers a tortured relationship with body image and weighing oneself. On “4st 7 Lbs”, it’s a deathly struggle to get one’s weight as low as possible; then there’s the album cover painting by Jenny Saville, which shows an obese woman from three separate angles. Beauty and physical satisfaction, it seems, is unattainable. “Beauty is such a terrible thing,” goes a line on “She Is Suffering”.

Die in the Summertime: An Encyclopedia of Atrocity on Manic Street Preachers' Holy Bible