I’ve never been to Sleep No More, the interactive theater experience that takes place inside the “restored” McKittrick Hotel in Manhattan’s Chelsea neighborhood. Friends have told me it’s a must-see, full of unnerving oddities and staggering surprises. So when my pal Kally told me he’d procured an invite to a “secret” Spoon gig at the McKittrick, I was more than game, expecting a unique concert experience. Rightfully so, it turned out.

Calling it a “secret” show is a bit disingenuous; after all, you had to respond to social media posts and receive an e-mail invitation to get in. “Exclusive” may be more appropriate, certainly for the hundreds of fans who waited in line for over an hour only to be excluded from the event. I was in line at 7:08 p.m., and around 8:15ish security came down the line and checked IDs and e-mail confirmations. We were each handed playing cards backed with wire-frame hands and the Myspace logo; yes, it turned out this was a Myspace-sponsored event, something that honestly tainted a bit of the magic, as did seeing staff with “Secret Show” t-shirts milling about inside. Sort of ruins the mystique, no? 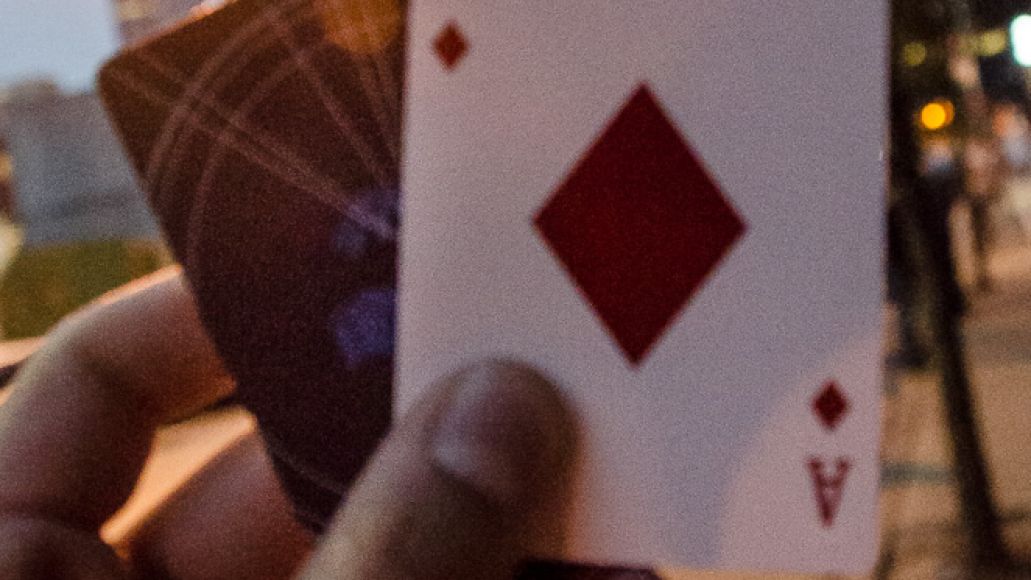 But the venue did more than enough to compensate for any corporatewash. Upon entering an “elevator” (I’m fairly sure it didn’t move, but the long walk down multiple flights of stairs at the end of the show would suggest otherwise) at approximately 8:45 p.m., we were given a speech by a petite elevator operator about how we’d escaped the outside world and would be reborn anew once we exited the lift. The spiel felt very Sleep No More-esque, and I suspected this thing really would mix a bit of the Punchdrunk production with a Spoon concert. Confirmation came when my companion was given a special welcome and pulled away from me by a slender woman in all black. “Goodbye, Ben,” he called as he was led down a hallway and the rest of us were hoarded into a musty barroom.

I was a bit stunned by his sudden disappearance, though it put a big grin on my face. I was expecting something different and certainly seemed to be getting it. After having a lollipop slipped into my shirt pocket by a coy cigarette-tray girl, I made my way to the bar. No more than 250 people were inside, all trying to get a drink and push themselves as close as possible to the red curtain lining the far wall, behind which was presumably the stage. Colored lights continuously shifted above our heads as wisps of dust and mist hovered in the air. I was just ordering two amber ales when my friend reappeared behind me.

He recounted his ordeal, saying he was told he had been expected and that someone was waiting for him. He was brought to an old phone booth and instructed to dial 103. “Welcome back,” a man’s voice said on the other end. “We wanted to make sure you were ready. Are you ready?” He played along and said, “Yes,” when a door opened into a small room with rows of dead lightbulbs gently swinging overhead. A man stood there with a bucket of water and proceeded to bless and cleanse Kally’s hands and face. The man then produced a nondescript sacramental pastry and placed an eye droplet of what we can only hope was water on it. He asked again if Kally was ready and then pressed the entire pastry into my friend’s mouth. A second door opened, and he was released back into the crowd. This was a Spoon concert, remember. 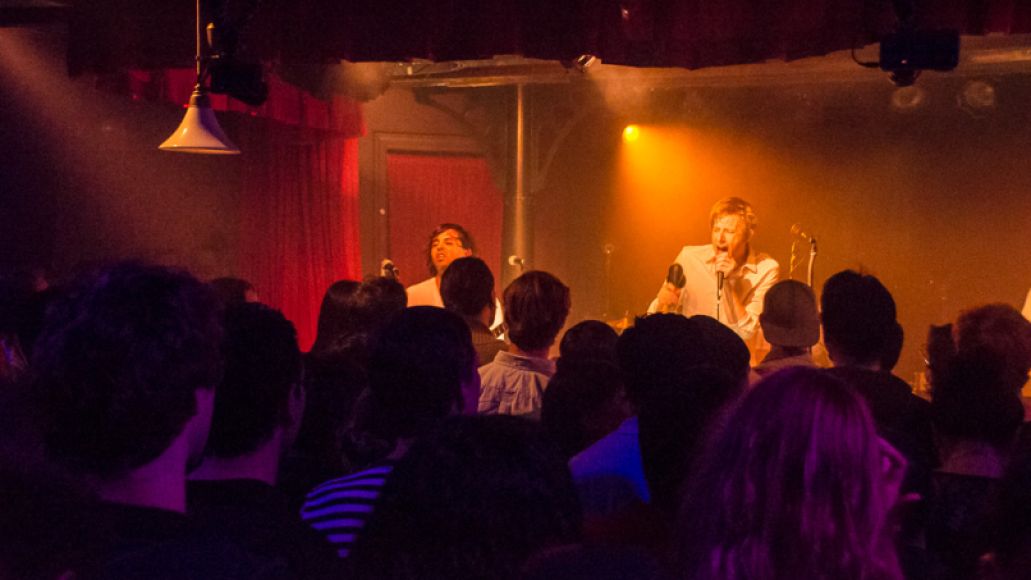 While Kally had been randomly selected for a bit of mystery, the only magic the rest of us were experiencing was trying to get to the bar for another drink and back to our spot in the crowd as anticipation grew. With no fanfare to speak of, two ladies pushed through from the back carrying a white sheet attached to two poles. They opened the sheet in front of the curtain as a black-and-white projection reel started. A female voice-over came on as images of atomic bombs and other ’40s- and ’50s-era found footage were displayed. When the footage turned to a group of teens doing some swinging dancing, it switched to color and soon ended.

A small woman done up in ’40s garb had appeared in the center of the crowd, a spotlight shining down and seeming to push people away from her. With a fake crow carrying a spoon dangling above her, she sang a jazzy version of They Want My Soul’s “I Just Don’t Understand”. Velvet-cloaked figures filed their way into the audience and surrounded her, but as her last notes faded out, the curtain drew open, and the figures dispersed. From my vantage point at the rear of the crowd, all I could see were microphones standing alone in a swirl of white smoke. One by one, the members of Spoon took their spots, and the show we’d come there for finally began.

Dressed in all white, the boys opened with a pair of They Want My Soul cuts, “Knock Knock Knock” and “Inside Out”. Just when I thought we might be getting an all-new setlist, the familiar key chords to “Small Stakes” plunked out, and the crowd’s excitement raised noticeably. Britt Daniel’s face broke out into that large, unaffected smile of his, finding as much pleasure in giving this unique show as fans had witnessing it. 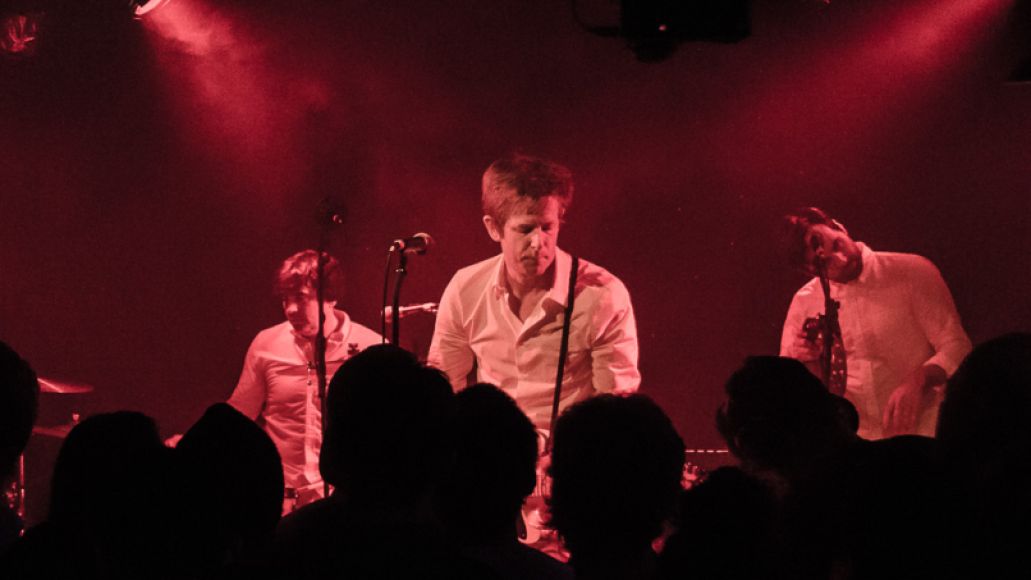 The new record is being called a fresh start for the veteran band, and they do seem to be enjoying it as such. Before going into “Do You”, Daniel reminded folks that there’s indeed a new Spoon album just days away. “We all played on it,” he said. “We all made it. We all like it.” Cheers sprung from the audience, prompting Daniel to ask, “Anyone heard it?” More cheers, louder this time. “Yeah, it’s alright, right?” He’s genuinely pleased with the new material, and that certainly helps to slip some of the more atmospheric moments (like “Do You” or “Outlier”) into a setlist of past favorites.

And the band certainly delivers an incredible performance. Jim Eno and Eric Harvey are indispensable to the “Spoon” sound, and their talents allow the swagger of something new like “Rent I Pay” to play smoothly into a older, jogging track like “Got Nuffin” without either song stepping on the other’s toes. Despite breaking a tambourine and accidentally unplugging his instruments, Alex Fischel provides a noticeable boost to their live presence. He draws as much attention as Daniel’s own stage power, with both repeatedly ducking out of my line of sight to wail on solos or toy with effects pedals.

In fact, Fischel’s addition is a rather literal indicator of Spoon’s new beginning. It gives a different weight to the repetition Daniel made of “we all” early in the set. The band’s been around for over two decades, but there is a neoteric notion about this lineup and this comeback album. Their dynamics both on record and on stage feel fresh, even if they’ve really only been shaken up a bit and redressed. Instead of just helping the outfit refurbish their sound with an added instrumentalist, Fischel truly adds to what already existed, allowing Spoon to grow, if ever so slightly. 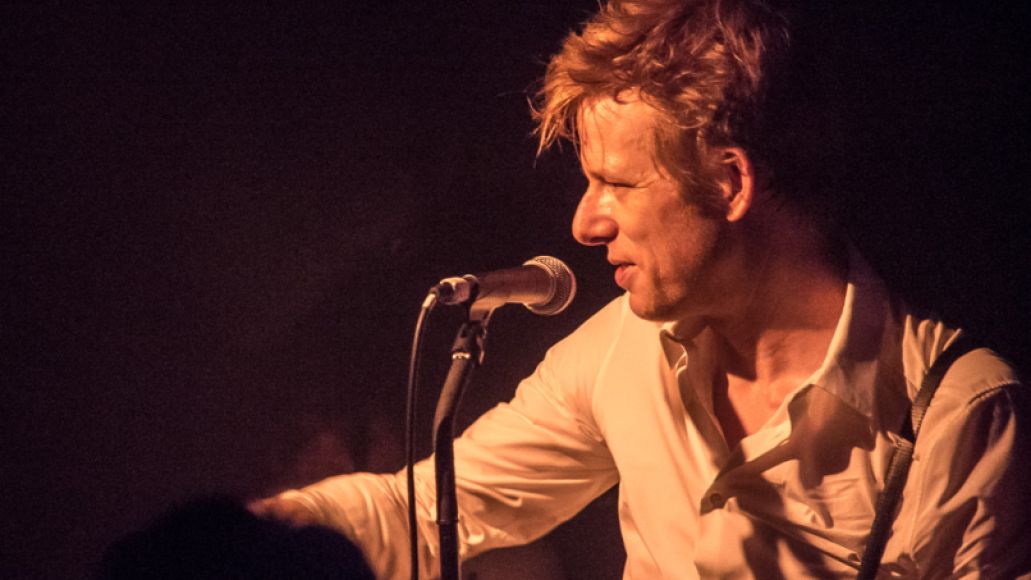 Whatever it is, they’re enjoying the hell out of it. Daniel had remarked that “You Got Yr. Cherry Bomb” would be the final song of the evening, but while the last bits of reverb were still pulsing, he rallied the troops for another charge. “We like you guys,” he told the packed, applauding audience. “We’re gonna play one more.”

Before finishing the night with “Black Like Me”, Daniel added, “I can’t think of a better place to do…” He turned to his bandmates. “What is this? A release show? A two-days-before-the-release show.” It is strange to try to classify what this gig was, which makes reviewing it troublesome. It wasn’t a secret show, it wasn’t technically a release show, and it certainly didn’t feel like any other concert I’ve ever attended. As we headed for the exits and received our complimentary posters, I could still feel the buzz from whatever orange cordial that silent bartender had slid across the counter for me. That certainly didn’t help the disorienting feeling as we wound down a series of stairs that felt far too high for where I had perceived we had been. We popped out into another bar where a masked band was finishing a murky jazz tune, and then, just as I felt I was being sucked back into the McKittrick’s bizarre atmosphere, I was standing on a New York City street again.

For an hour and a half, we had stood in a tiny bar, dazed by booze and dim light, to witness Spoon deliver a performance celebrating decades of labor as well as whatever new start They Want My Soul represents. What bookended the show, however, was pure Twilight Zone, a surreal framework that made critiquing the concert we’d come to watch seem like a fool’s errand. It was an interlude from the norm – less to be questioned, more to be experienced.

Setlist:
Knock Knock Knock
Inside Out
Small Stakes
The Beast and Dragon, Adored
Do You
Don’t Make Me a Target
Outlier
Who Makes Your Money
Rent I Pay
Got Nuffin
Encore:
Turn My Camera On
You Got Yr. Cherry Bomb
Black Like Me

They Took My Soul: Spoon at New York's McKittrick Hotel