In 1968, two years before The Beatles’ official disbanded, George Harrison became the first of the Fab Four to go solo. The discography he cultivated over the next 30-plus years is not only prolific but creatively expansive, deftly mixing an unquenchable musical curiosity with earnest emotionality and distinct sense of spiritual exploration.

As pioneering as these records were, several of them have long been out of print. However, that’ll soon change, as his first six solo albums are being re-released in an enormous new box set. Due out September 23rd, George Harrison: The Apple Years 1968-1975 spans eight discs, remastered at Los Angeles’ Lurssen Mastering by a team of Grammy-winning engineers, including Paul Hicks, Gavin Lurssen, and Reuben Cohen.

The six albums included in The Apple Years are:

— Wonderwall Music (1968): the soundtrack for director Joe Massot’s film, the album is an “intricate, vibrant tapestry of Western rock music and compositions in an Indian classical style,” according to a press release. The remastered version features three bonus tracks: “In The First Place”, a previously-unreleased alternate take of “The Inner Light,” and the previously-unreleased “Almost Shankara”.

— Electronic Sound (1969): one of only two albums released on The Beatles’ experimental Zapple imprint. According to a press release, the remastered version features the tracklist originally intended by Harrison, with “Under The Mersey Wall” on side one and “No Time Or Space” on side two.

— All Things Must Pass (1970): one of Harrison’s most acclaimed records, the all-star effort was co-produced by Phil Spector and includes cameos from Eric Clapton, Ringo Starr, Billy Preston, members of Badfinger, and more. The new package features the five tracks included on the 2001 reissue: “I Live For You” (outtake), “Beware of Darkness” (demo), “Let It Down” (alternative version), “What Is Life” (backing track), and “My Sweet Lord (2000)”.

— Living In The Material World (1973): one of Harrison’s most spiritual albums ever and often regarded as a kind of successor to All Things Must Pass. The box set includes a remix of the single version of “Bangla Desh” and two B-sides included on the album’s 2006 reissue, “Deep Blue” and “Miss O’Dell”.

— Dark Horse (1974): recorded amidst one of the most prolific periods in Harrison’s career: during the sessions, he also produced several other albums, built his own recording studio, and founded his Dark Horse imprint. The remastered album includes the B-side “I Don’t Care Anymore”, which makes its debut on CD, and an early, acoustic take of the title track.

— Extra Texture (1974): the result of Harrison’s exploration with R&B and soul music, aided in part by collaborations with Leon Russell and the band Attitudes. The box set versions includes the 1992 demo “This Guitar (Can’t Keep From Crying)”, which has since been overdubbed by Ringo Starr and singer Kara DioGuardi.

In a statement, Dhani Harrison said, “I am so happy that what we started a decade ago by releasing The Dark Horse Years is now complete with the release of his first six albums as The Apple Years. Some of these records have long been out of print, and so I cannot wait for music lovers to get their hands on these newly remastered versions. It’s a very proud moment for us, and I would like to thank everyone who has helped us in any way to achieve this.”

Pre-orders for the box set are ongoing. Below, watch a trailer.

Here’s the entire set laid out: 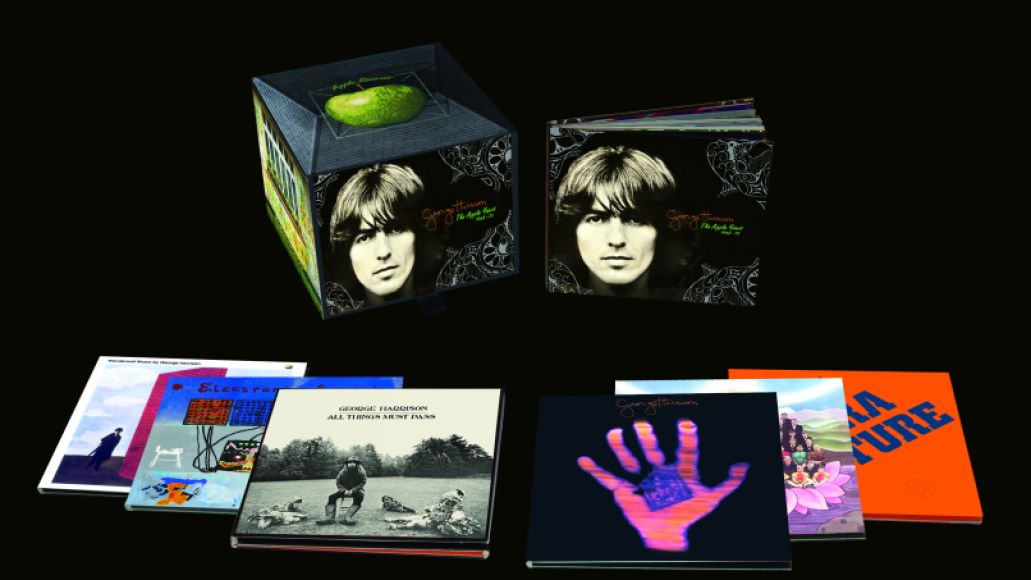