On a cloudy July morning, Jeff and Spencer Tweedy make their way toward 30 Rockerfeller Plaza. In a few hours, the recording project known as Tweedy, featuring Wilco’s frontman and his 18-year-old son, will make their late-night debut on The Tonight Show Starring Jimmy Fallon. They’ll perform two new songs inside a packed studio, and it will be broadcast to nationwide viewers later that evening.

Late-night TV performances are a record cycle ritual for Jeff. The 47-year-old songwriter has made more than a dozen appearances on the small screen during his nearly three decades playing with Wilco, Uncle Tupelo, and other projects. It’s Spencer’s first time playing to a televised audience. Spencer, who just received a fresh coat of makeup, sits behind his maple four-piece drum kit as his dad takes his place at center stage. He’s nervous about only having one take to nail the opening drum fill of “Summer Noon” — he started one beat late during soundcheck. He instead nails the part when it counts and relaxes into a steady groove.

Spencer has watched his dad tape multiple late-night performances. When he was six years old, Spencer threw a tantrum during the soundcheck before one of his father’s television appearances. A studio employee told the brown-haired boy, clad in a Looney Tunes jean jacket, that he was too young to sit through the performance. Twelve years later, he’s wearing his own badge denoting that he has every right to be backstage. Catered sandwiches, vegetables, and blueberry-filled Momofuku cookies adorn the band’s dressing room. Fallon quips about a group of Wilco fans in Los Angeles who mistakenly thought he was Jeff. Questlove gives his fellow drummer a fist bump backstage. To capture the moment, Spencer poses for a photo, holding up a white cardboard sign with his left hand that reads: “Our next guests feature the talents of Wilco frontman Jeff Tweedy and his son Spencer.”

Spencer describes the past year of his life in a single word: surreal. The Fallon taping was one of many firsts shared with his father. Jeff and Spencer started a band, recorded dozens of songs, and toured across the globe together. The two also posed for press photographs, conducted interviews, and, yes, weathered their share of dad rock jokes. It’s a dream come true by his account. 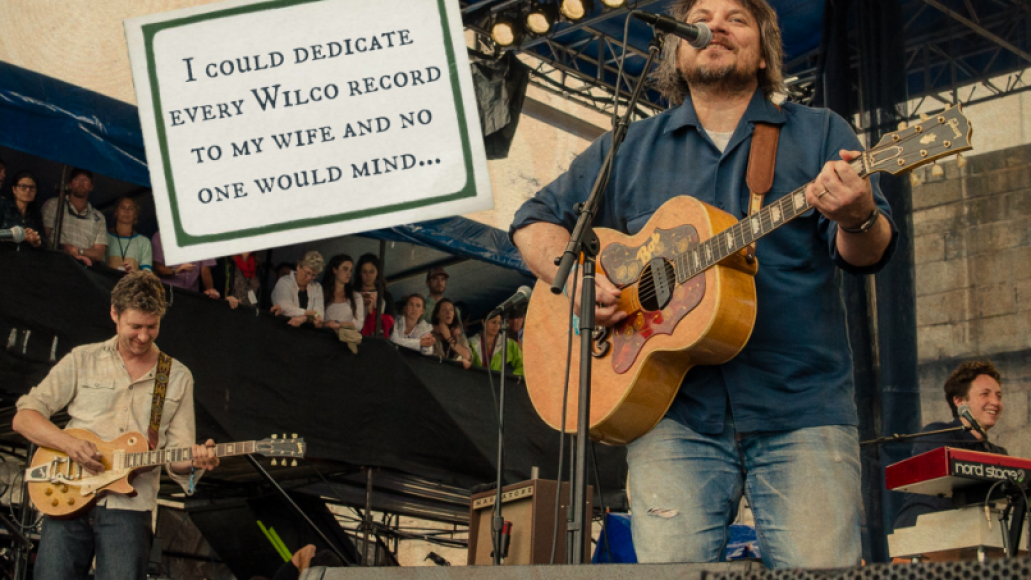 “I always wanted to play music with my dad,” Spencer says. “When I was a little kid, I would watch Wilco on The Tonight Show while my dad was out on the road. I thought about it every day.”

All of those moments arose from the creation of Tweedy’s forthcoming 20-song debut, Sukierae. Like his son, Chicago’s most recognized songwriter managed to tread new ground, albeit in unexpected ways. It’s the closest that Jeff, widely characterized as a private individual and somewhat cryptic lyricist, has come to releasing a proper solo album during his two decades at the helm of Wilco. What initially started as a solo recording session on a rare touring reprieve quickly became grounds for a collaboration with his college-bound son.

In the midst of recording, the two were unexpectedly forced to grapple with the most harrowing period in their family’s history, marked by two cancer diagnoses in Jeff’s wife and Spencer’s mom. In the process, Sukierae morphed into a familial affair in the truest sense: a solo record performed by a duo, a father and son creating in the face of uncertainty, and a family finding solace within music amid a passing storm.

“I could dedicate every Wilco record to my wife and no one would mind,” Jeff says. “But it feels less personal to me than this situation we found ourselves in. It just coincided in a fortuitous way. I don’t know how it happened … It ended up being more of a family thing.”