It could have — and really should have — amounted to a good deal more. When a first-ever Hollywood Bowl pairing of Elvis Costello and Ben Folds was announced back in spring, it seemed like a wordy pop nerd’s dream bill: the ever-restless iconoclast, roughly a year after dropping his Roots collaboration, Wise Up Ghost, appearing on the same hallowed stage as Gen X’s perpetually boyish answer to Elton John, each delivering separate but (nearly) equal sets backed by the L.A. Philharmonic.

Instead, it was one of the bigger letdowns in a spotty season at the landmark, one already pockmarked by an abominable 50th anniversary Beatles tribute recently.

Costello unquestionably had a rough night. He arrived vocally shaky, flatly rasping “Accidents Will Happen” amid an arrangement that played like an extended overture, then struggling to hit high notes and be heard over imperial trumpets at the end of “Veronica”. Two misfires straight away, yet along with another requisite ode to “Alison” for a bookending solo encore — a go-to closer as obvious as “Born to Run” or “Hey Jude” — the newly 60-year-old tunesmith, dapper in a vested black suit and red hat, offered only nine songs total during this first of two performances with the renowned orchestra. That seems skimpy, particularly at a concert for which even decent seats cost triple digits. And still it was at least twice as many selections as were needed to confirm that the Spectacle host was smart not to add more.

The fault lies not with the concept but the execution, and Costello is unpredictable and firebrand enough to have returned to full roar for the second night. Though he’s been at odds with L.A. weather before (recall the hoarseness throughout his lone MTV Unplugged taping in 1991), it may have been that he simply needed more warm-up, or perhaps was getting over a cold that he didn’t care to mention. Certainly he was on point by the end of his hour-long turn at the Bowl, cleanly — and given how he started the show, some might say miraculously — nailing those top-of-his-range cries in the most stirring passage from “God Give Me Strength”, his shoulda-been Oscar-nominated first collaboration with Burt Bacharach from 1996. 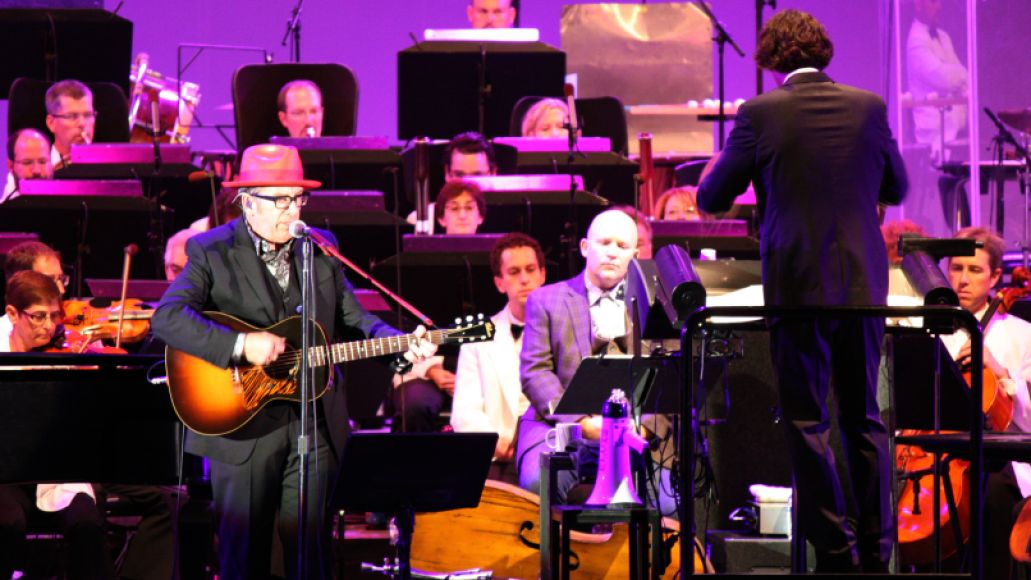 It was about that time in his eclectic career that Mr. MacManus began to write melodies he himself couldn’t always sing so effortlessly, a sophistication born in part from his then-rapidly expanding passion for all things not rock ‘n’ soul.

Catalog evidence is abundant, dating back to fascinating surprises inside 1982’s Imperial Bedroom (notably the stark, lounge-noir classic “Almost Blue”) and the rainy-day jazz of the prophetic wartime drama “Shipbuilding” from a year later. Such moods largely fell by the wayside as a slicked-up bust of a record (1984’s Goodbye Cruel World) yielded to a seven-months-apart double whammy in ’86, the seminal Americana excavation King of America giving rise to a resuscitation of gnarlier fighting spirit via Blood & Chocolate.

After that, however, maturity finally settled in. Ever since, even on crankier assortments like Brutal Youth and When I Was Cruel, his approach has grown increasingly multifaceted. No album comes without left-field forays, and some — the piano ballads of North, the full-length Bacharach gem Painted from Memory, his classical song cycle Il Sogno, and not forgetting his fleeting 1993 affair with the Brodsky Quartet for The Juliet Letters — well, they are confounding, ambitious, sometimes spectral works you can’t imagine anyone else making. 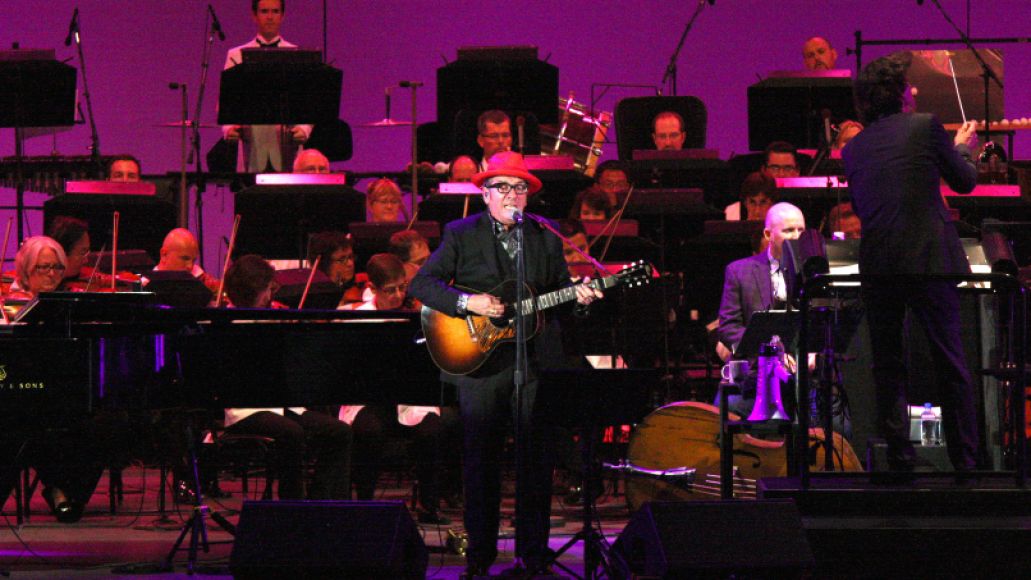 Point is: Costello has been scratching this high-art itch for quite a while. So, you’d suspect a ballyhooed Bowl collab with the L.A. Phil might be a minutely refined, well-oiled machine of a show, regardless of the number of rehearsals. After all, like Folds, he has made a minor habit of performing with orchestras internationally, rearranging both shopworn and just-inked material in mellifluous ways you’d never have dreamt coming from the guy who penned “Pump It Up”. He’s on such intimate terms with these adaptations of “Accidents” (rather Copelandesque) and “Watching the Detectives” (very Mancini) that at times during this Bowl show you could catch him leaning in for accents during instrumental stretches, shadowing the body-language punctuation of the program’s skilled conductor, Scott Dunn.

Mutual admiration aside, something never fully gelled between singer and symphony. When the ensemble was in the zone, their star was off, clipping phrases and falling under notes, as on an otherwise lovely rendition of “All This Useless Beauty”; when he was on — that vocal on “God Give Me Strength” was truly heaven-sent — they were noticeably tentative and unsteady. And on back-to-back pieces that heavily weighted down the set’s middle, their union became almost discombobulated. Even with Diana Krall’s drummer Karriem Riggens and bassist Dennis Crouch anchoring the enterprise, both the sinister groove of the dark Nativity retelling “Bedlam” and the loping loop of “Wise Up Ghost” reduced to droning mush that undermined Costello’s more impassioned hollers here (at one point through a bullhorn with his name emblazoned on the side). It’s like trying to turn “Tokyo Storm Warning” into a Bernstein ballet — it won’t work.

So many of the arrangements were indeed deftly devised and occasionally packed sympathetic memories: Costello noted more than once that the orchestra’s parts for “Shipbuilding” were cribbed liberally from the studio improvisations of mournful trumpet great Chet Baker. Yet, while one could sit back in his $150 seat and admire the emotional enhancements and playful wit on display — it’s also impossible not to admire the consummate musicianship of pianist Steve Nieve, even when soloing on a poorly miked melodica — the clumsiness of the performance kept getting in the way. Just when it finally seemed to come together … it was over. 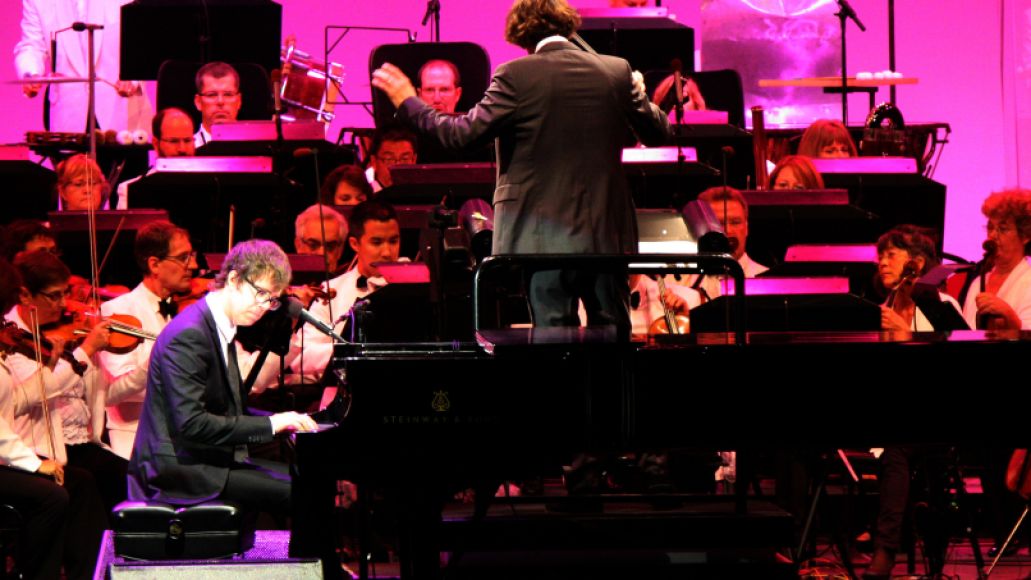 Folds, on the other hand, fared better, synching richly with the L.A. Phil from the launch of “Effington” and “Jesusland” and improving every step of the way. The results were sweepingly cinematic: “Narcolepsy”, one of only two Ben Folds Five tunes attempted, felt like a sped-up rethinking of Ravel’s “Bolero”, with appropriately thunderous cascades in the middle and stop-on-a-dime dynamic control toward the climax. “Landed”, like the choir-abetted “Jesusland” before it, stirred dramatically like early Elton, bolstered by strings straight out of Paul Buckmaster’s arranging for Madman Across the Water. The third movement of a piano concerto commissioned by Acura and Panasonic (“they were my Medici family on this one,” he joked, after lamenting the lack of record labels for such music) was politely experimental, dotte by Folds striking and muting the inside of his Steinway, yet the vibrant piece was still Gershwinesque enough to enthrall.

Only as he began to run out of time did he falter. After a brief but convincing plea to support such programs (“the symphony orchestra is a pilar of civilization,” he insists, and cities without thriving ones “are crap, you don’t want to go there”), he unfortunately darted into his pounded-out revenge fantasy “One Angry Dwarf and 200 Solemn Faces” at breakneck pace. It hurtled toward an unhinged finale that collapsed into cacophony and tempo collisions, the Philharmonic unable to match his sprint. But the rest of his concentrated performance was textbook: a perfect mesh of clever melodic pop and brassy grandeur. 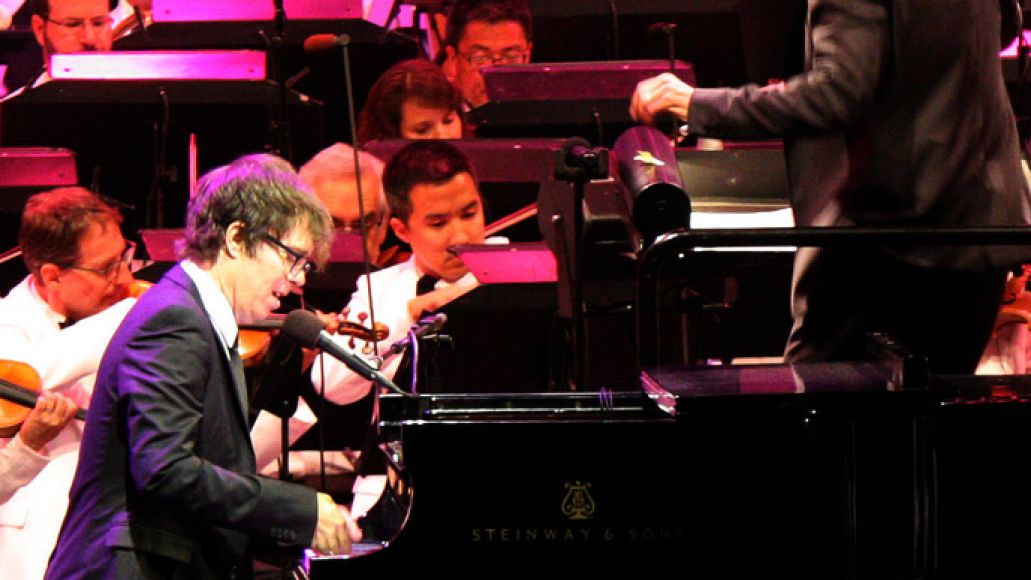 Elvis Costello Setlist:
Accidents Will Happen
Veronica
All This Useless Beauty
The Girl in the Other Room
Shipbuilding
Bedlam
Wise Up Ghost
Almost Blue
Watching the Detectives
God Give Me Strength
Encore:
Alison