Last time I was at New York City’s The McKittrick Hotel for a concert, it was an eerie, momentary lapse in reality. I was there for Spoon, a band not built for such a strange setting, making the show more of an experience than your typical album release gig. But for Karen O’s first performance behind her solo debut Crush Songs, there were none of the theatrics – no creepy elevator rides, no dark rooms with forced sacraments. There was no notion that this was some otherworldly endeavor meant to mystify as much as entertain.

I entered about 30 minutes before showtime to a room completely filled with smoke, but only perhaps half filled to its 200 person capacity. Save for the red velvet everything, and a few masks and decorations hung sparsely about the walls, there was no indication this was anything but a small, intimate venue for an indie rock star’s big solo debut. The only thing that stood out was a neon heart with “Crush Palace” held within hung on the back wall. It’s a good thing too, because anything more would’ve been disingenuous to what was ahead. 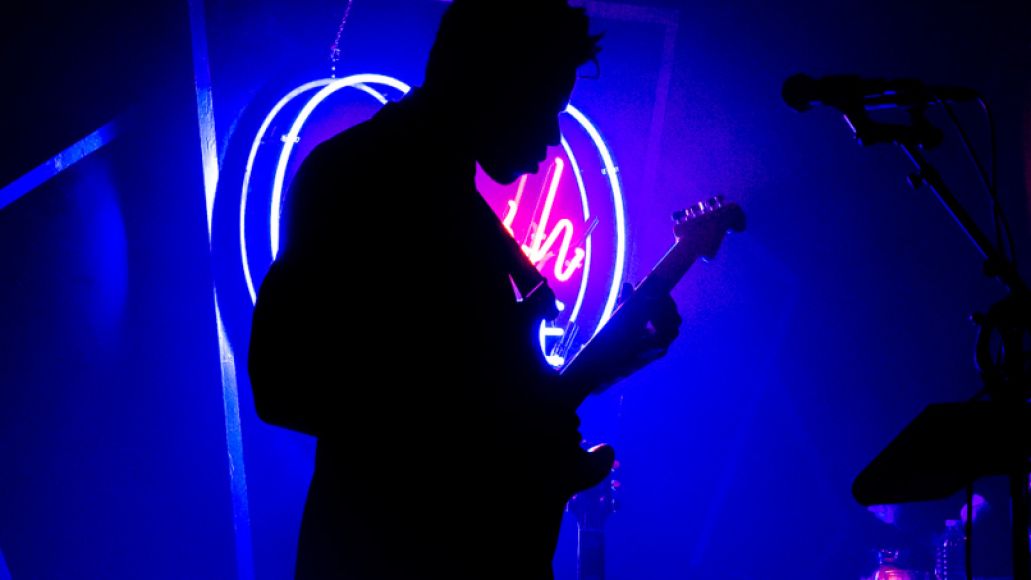 This truly was Karen’s coming out party as a solo singer, and her choice of venue couldn’t have been more appropriate for what that means. Her two backing guitarists/singers took the stage first, creating a soft drone of music to begin to silence the crowd. With no fanfare at all, Karen strode up from side stage, the winged hem of her sheer blue dress held up on rings around her fingers.

This woman gliding upon that small stage, elegant in her flowering movements, opening with the hushed “One, two, three, go” of “NYC Baby”, is not the same as the one who fronts the Yeah Yeah Yeahs. Gone is the leather-clad, frenetic indie rocker, replaced by a wispy cooer who delivered semi-intentional squeaks on “Rapt”. She giggled sheepishly with her acoustic guitarist when she couldn’t hit those opening notes on “Other Side” on the first try. She couldn’t help but laugh every time she did the chorus for “Day Go By”. 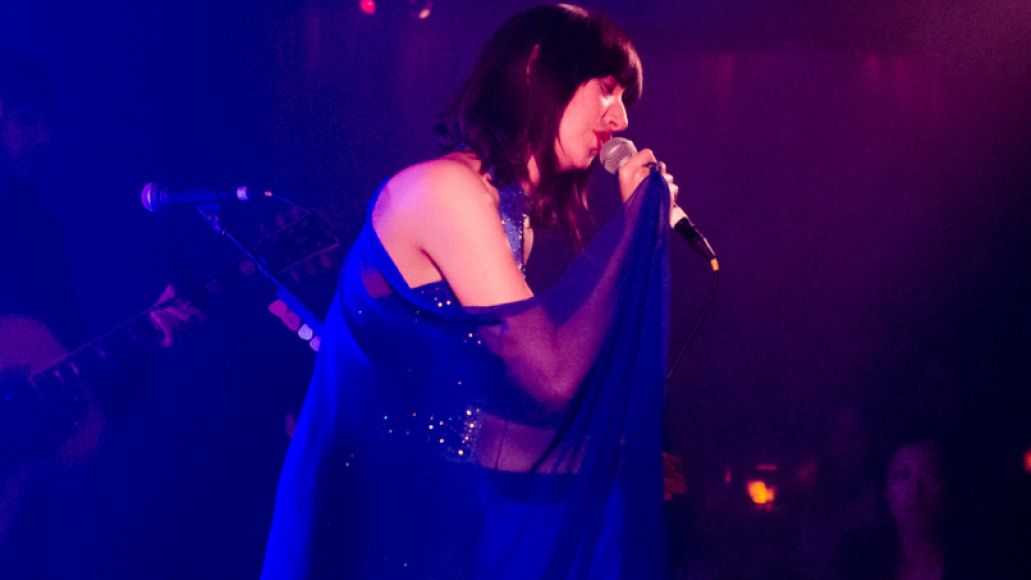 Of course, this really is still the Karen O we know and love, but one who realizes fingerless gloves and fishnets don’t suit Crush Songs. Thus, she’s created a much simpler persona for much simpler songwriting. But that simplicity is actually more complicated live. As much as the tracks feel like rough drafts on record, they are fully realized in a live setting. They sound far more intentional, like they were meant to be shared, unlike the (essentially) demos she canned seven years ago and just Tuesday released on record.

No doubt much of that is due to her live band, the astounding duo of Moses Sumney and Holly Miranda. Miranda contributes the gentle acoustics and a deeper counterpart to Karen’s cloud-high notes. Sumney brings distorted waves of electronic guitars that give so many of the songs their new live atmosphere. I worried his contribution to the transformation of Karen’s music would go under-appreciated by the crowd until he was given a solo song, “San Fran”, that let him show off the beauty of his glassy vocals. (The click-clop mouth noises he added to “Body” were pretty great, too. Another addition to that number was the freakout bridge filled with screams, laughter, and sleigh-bells.) 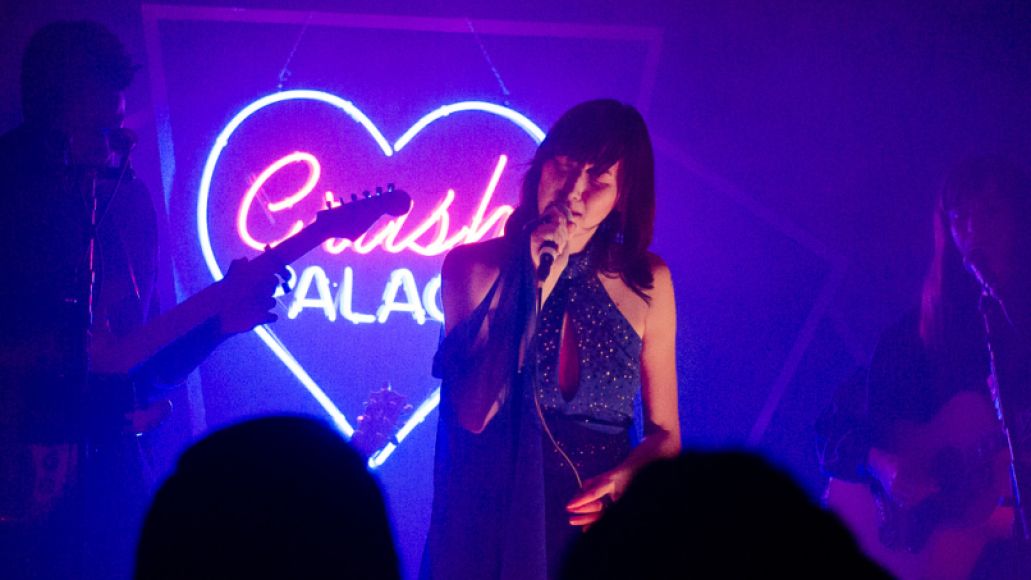 The Crush Songs received further rounding out by a few guest appearances by Karen’s YYY bandmate, whom she called her “musical soulmate,” Nick Zinner. He snuck up onstage unannounced (save for the acoustic guitar that awaited him) during Where the Wild Things Are‘s “Hideaway” to stoically provide a river of plucked chords. Karen beckoned him to take center stage on his elongated solo, but his cord wouldn’t reach, so she sat at the small table behind Miranda, sipped her water, and closed her eyes to bliss out as Zinner carried her and us away.

Truly, the whole hour-long, midnight set had us all carried away on those beautiful billows of songs. There were moments of levity, like when Michael Jackson’s famous speech about performing to make people happy played before Karen donned a sparkling silver glove for “King”. There were times when the gentle songs on record almost became full-on rockers, as when Zinner rejoined for “Day Go By” (as did a tambourine played by someone Karen introduced as Russell Simmons, whom I couldn’t see but I can’t imagine was that Russell Simmons). 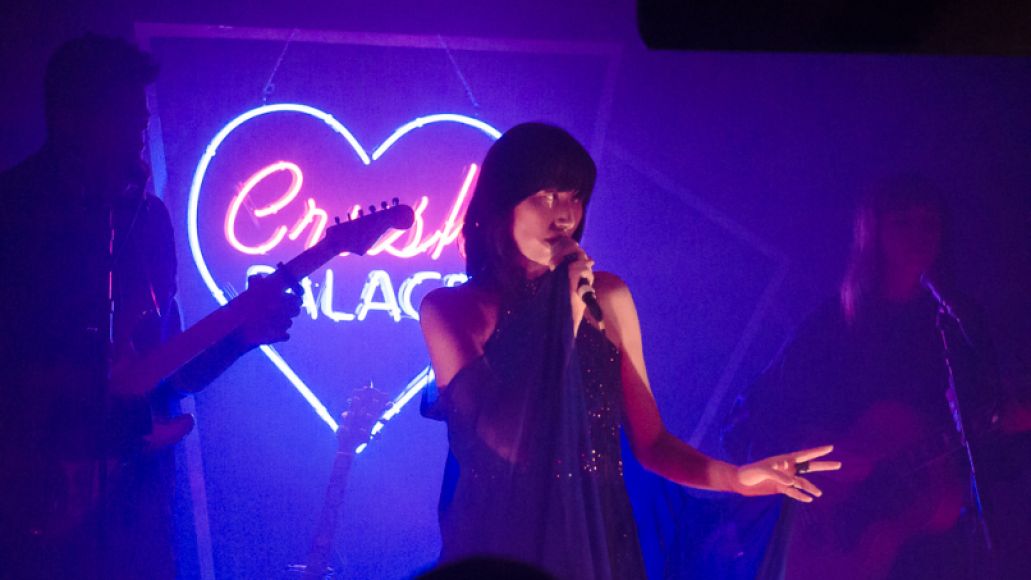 But then she’d play “Singalong”, a song she told us was written one late, drunken evening with two friends in a New York City hotel room, and we’d be brought back into the intimacy of the show. As much as the tracks on Crush Songs feel like unfinished peeks inside a young woman’s heart, they sound much richer presented by a well-rounded woman in their live incarnations. One might actually wish that Karen would go back and rerecord the tracks as she performs them now so they could last eternally in that form. For now, however, we’ll settle for the ephemerality of their live beauty. This is the time to really hear what Crush Songs is meant to be.