It’s been a whirlwind five months for the southeast’s biggest rap duo of all time, and after taking in this weekend’s monumental occasion in Atlanta’s Centennial Olympic Park, it’s abundantly clear that Outkast hit the nail on the head by planning out a late-in-the-tour homecoming with all their closest musical friends and most rabid fans. With ample time to get into their groove throughout an extensive tour and an adoring, lively, and highly familiar audience, the stage was set for a once-in-a-lifetime party that many of us here in the South have waited a very, very long time to witness.

Some will recall that the booking process for the three-night mini-festival was entirely based on demand: after night one sold out almost instantly, an additional two nights were added, openers and announced special guests upped the ante, and the highly memorable #ATLast event came to fruition. In a diverse and sprawling city like Atlanta, happenings with the ability to attract such a wonderful and representative cross-section of the town are few and far between outside of sporting events. On this night, however, there was a rare sense of unity through music and a nearly indescribable electric air of excitement resonating across the downtown park. Dre could feel it, too, even remarking that “It’s really lovely to see the city like this.” 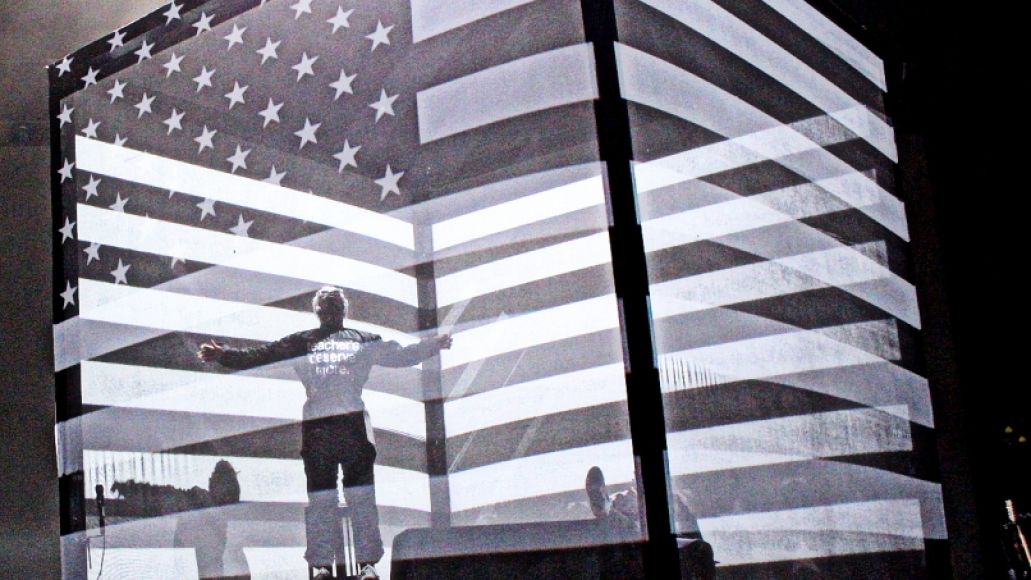 Taking the stage just after 9 p.m., when the curtain rose and revealed Andre 3000 and Big Boi shrouded behind a translucent silk screen lit up with a black-and-white American flag, the impressively talented and locked-in accompanying space-funk band quickly blasted into “B.O.B.” to open the show in proper fashion. 3000 once again appeared in a black jumpsuit and platinum wig with a message that read, “Teacher’s deserve more” (note the punctuation). Andre snarkily remarked early on, “If you don’t know us by now, you probably never will,” and it was abundantly clear from the crowd’s deep knowledge of Outkast’s entire discography who everyone came out in droves to see.

Early on, the appearance of a dapper, silver-suited Sleepy Brown was the first huge and pleasant surprise after he was conspicuously missing from the announced special guest cast. Sleepy first appeared during the dubby and horns-heavy “Spottieottiedopealicious” and again surfaced to take the vocal reins for the 2003 instant classic “The Way You Move”, a tune that was as seductive and enthralling live as on record. “Prototype” and “Aquemini” showcased the jazzier segments of Outkast’s catalog and offered the crowd momentary breathers from dancing their asses off. 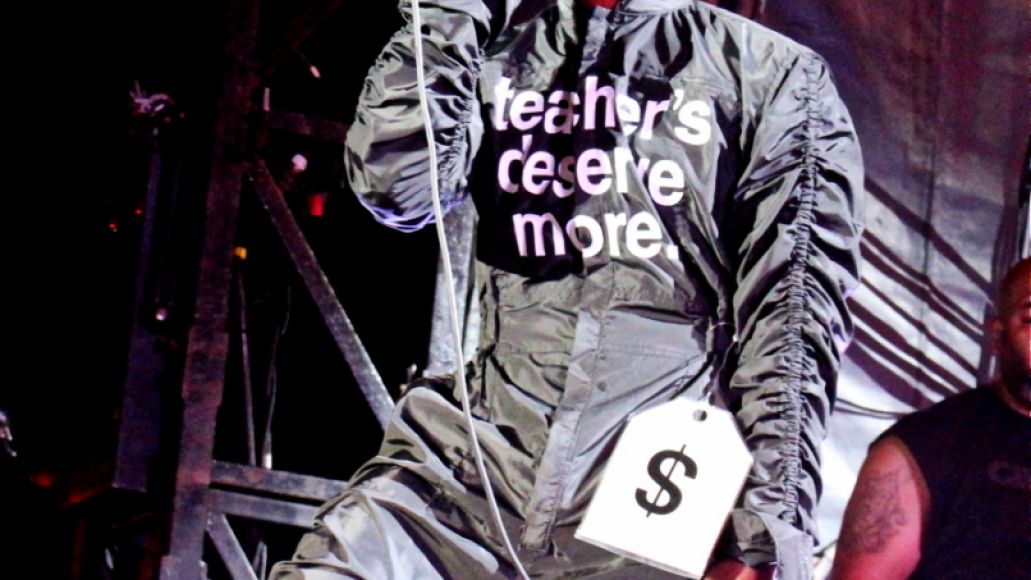 As live rappers, there are few artists who can keep pace with their frenetic studio prowess and speed like Big Boi and Andre 3000. This became apparent right out of the gate on the opener and again on tracks like Speakerboxx’s “Ghettomusick” and while effortlessly rolling through the patterns of flow on “Southernplayalisticadillacmuzik”. Surprisingly, the tune this side of “Hey Ya!” that incited the most boisterous dance party scene had to be “Kryptonite (I’m on It)”, an off-album Purple Ribbon All-Stars cut.

For the encore, the duo returned after drumming up some big noise for a LOUD rendering of “Gangsta S**t”, which featured a few members of the Dungeon Family (including Slimm Calhoun) who appeared on the original track. Closing with this track was a symbolic hat tip to the influence they’ve reciprocated with so many local artists. 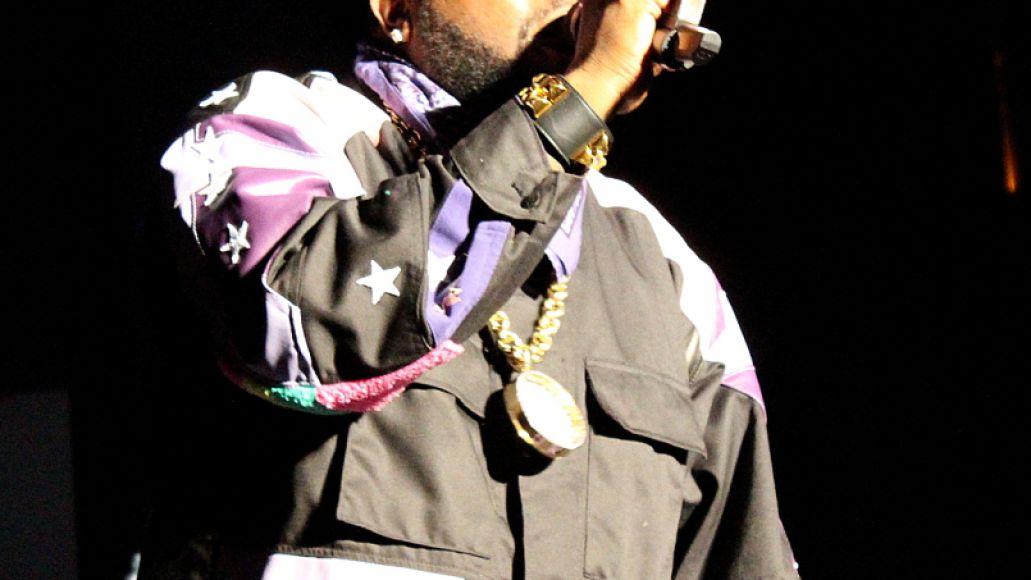 Despite reports from some of the prior festival sets that there was a disconnect between the offbeat goofball duo onstage, on this night, all signs pointed to this odd couple being as thrilled as can be to finally once again reign supreme over their hometown (on a day billed as “Outkast Day” by the Mayor of Atlanta). Even if they never play the city after this weekend or put out another track together, those who were there can feel good about this highly memorable bit of closure (while maintaining hope for another round one day).

Stank you very much, Andre and Antwan. 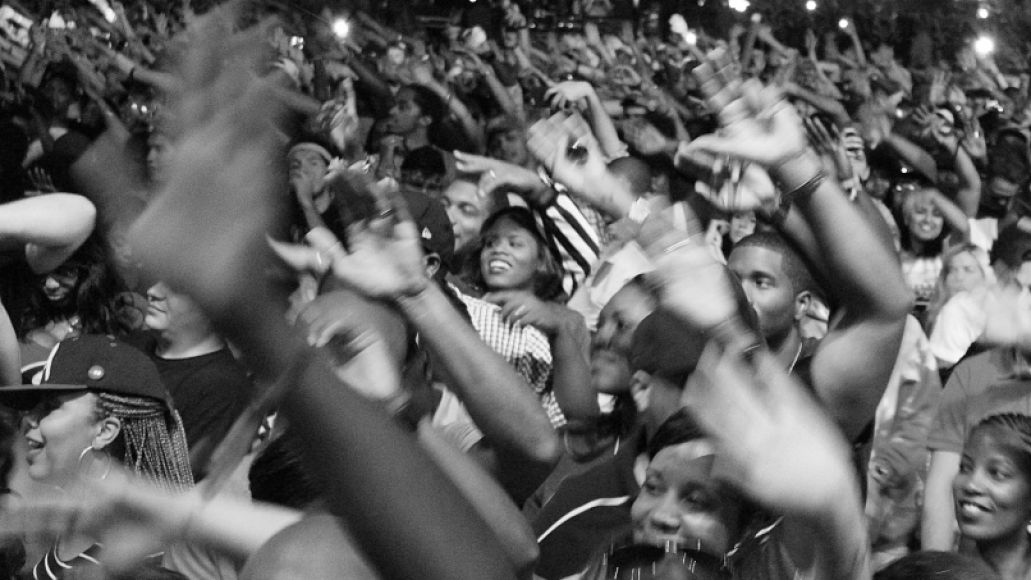