“Do you ever feel like no one understands you, like you’re speaking but it’s just…” Owen Pallett said midway through his Saturday night headlining set at the El Rey Theatre in Los Angeles, trailing off with the body language that signified nothingness. “Like you are an autistic child or something.”

After a short pause, he finished the thought: “Well, I don’t understand you either.”

Pallett followed the joke (?) with a rather sinister laugh, proud of his misdirection, but not coming off as proud in general, just confident. That feeling he was speaking about, of feeling misunderstood, isolated, crazy, abnormal — it permeates his music, particularly this year’s accomplished effort, In Conflict. Pallett is empathetic to fellow outliers, and that is evident not just in his songs and performance, but also in his choice of support in this performance: local, former-child-prodigy-led outfit Avi Buffalo and the excellent up-and-coming Foxes in Fiction. Pallett’s embracing of his onstage (and off) quirks and sense of humor is inclusive, leading his fans by the head into music of a wide range of emotions. Early in the set, Pallett confessed to sometimes simply wanting to retreat into the words and songs of others before playing his simply perfect cover of Bloc Party’s “This Modern Love”.

Before “Tryst with Mephistopheles”, Pallett warned the audience that the song to follow would last eight or nine minutes, feature but a single chord, and if anyone had any questions, now was the time to ask. When no one did, Pallett proclaimed Los Angeles the best audience of the tour (he’d later profess a desire to live in the warm and sunny city). At that, a few brave souls in the back called for “That’s Amore”, which Pallett proclaimed was for the end of the set.

He didn’t totally lie, playing the first couple lines of the Italian restaurant staple before the main set closers of “This Is the Dream of Win and Regine” and a huge “The Riverbed”. Accompanied with a rhythm section for most of the set, the backing added intensity to his already emotionally bare songs. Pallett was equally captivating by himself, looping his violin and synthesizer to create an army of sound for new album single “Song for Five & Six”.

Pallett has spoken candidly about the pros and cons of touring with his sometimes-band Arcade Fire, and one of the major pros is being able to pursue his own music without the same financial fears that he would without the successful side gig. A slightly more than half-full El Rey would be more worrisome were it not for the fact that Pallett just got off one of the bigger grossing concert tours of the summer. Playing in a beautiful venue in front of adoring fans is a luxury that his songs deserve. And if that means going on an arena rock tour with his besties to make this a worry-free possibility, then that seems like the best deal possible. The warm feelings were present for all the bands that performed. Avi Buffalo had a small, normally standing area reserved for the family of frontman Avi Zahner-Isenberg. Even throughout Pallett’s set, grandparent types could be seen milling about the theater, smiles wide, happy to be out past their bedtimes. And Foxes in Fiction mastermind Warren Hildebrand celebrated his birthday with his early set, featuring captivating synth-based tunes aided by Pallett and R.L. Kelly to the songwriter’s right and left. At the set’s conclusion, Hildebrand proclaimed it “the best birthday ever,” and it is hard to disagree when Owen Pallett sings you “It’s not your birthday anymore” at the stroke of midnight. It was the perfect sentiment for a night of music featuring three songwriters who operate firmly and happily outside the mainstream and for the fans who are willing to follow them into uncharted waters. 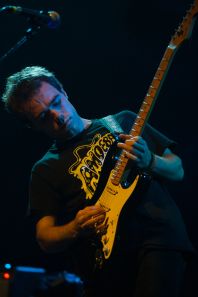 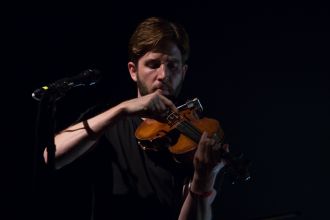 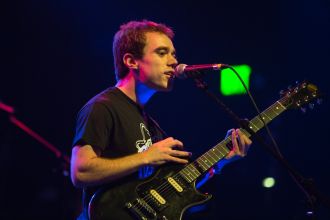 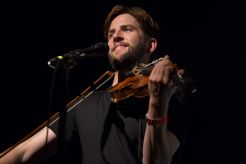 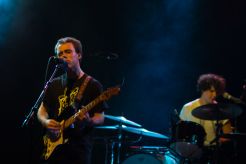