Budweiser Made in America’s inaugural Los Angeles event had disaster written all over it. A giant music festival in the heart of downtown on a holiday weekend where major streets were shut down and featuring a bill that appealed to the broadest audience possible, skepticism was at a high level leading up to it. Even with the late additions of Kanye West and Iggy Azalea, the shows did not sell out. Still, a large and refreshingly diverse crowd descended on downtown and managed to attend a festival that, from most perspectives, has to be considered a success.

Sure, there were issues. An entirely food truck-driven culinary menu saw huge lines and wound up with many just abandoning the idea of eating for 10 or so hours. The restrooms were all clumped in a single location that many had a hard time finding. And the bill, though in the end full of more surprisingly effective sets than disappointments, still did not excite the way the Philly counterpart did this year. But all of those combined couldn’t nearly sway the overwhelmingly positive vibes and the comfortably organized concert. 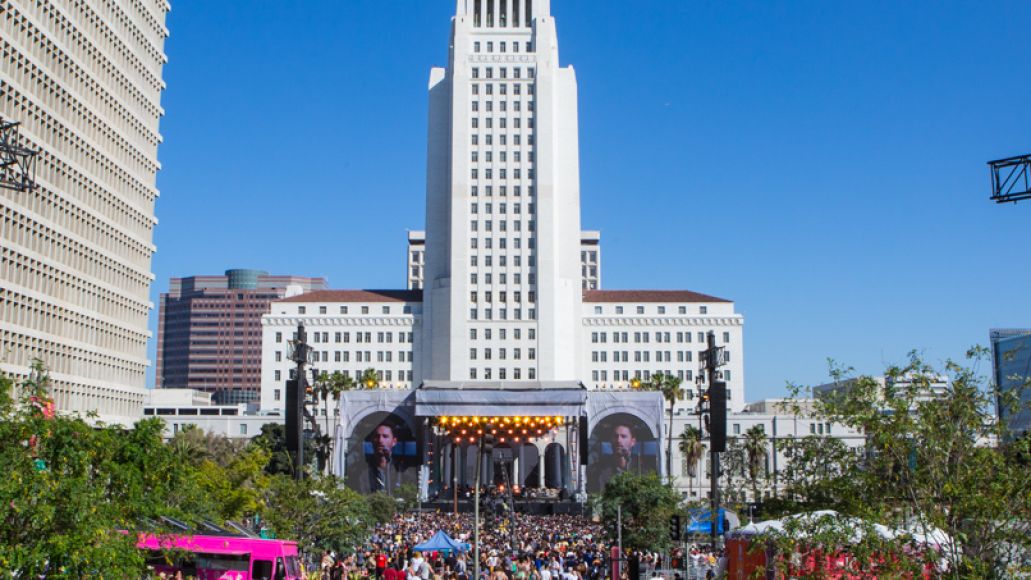 Featuring just two main stages that were virtually side-by-side, attendees didn’t have to miss a minute of the primary entertainment if they chose not to (a third EDM stage was located many blocks away and hard to reach, but the biggest dance acts got main stage placement), which makes justifying the experience easy when you know you will see the majority of the acts billed. Also a win was syncing up the festival with its Philadelphia counterpart. Body-sized monitors with cameras were placed on the grounds to corresponding units in Philly, allowing attendees at both fests a chance to wave at each other (or flash each other, which wasn’t completely uncommon). The screens on the side of each stage would show either what was happening on the other stage or what was happening in Philly in rare moments of inactivity.

And somehow, downtown didn’t turn into a madhouse. The majority of those who attended seemed to heed warnings and took public transportation; water was given out at the rail in mass, leading to a remarkably few witnessed people being pulled out of the pit in dehydration spells. When Jay Z and Beyoncé made their rounds around sunset on Sunday, they were greeted to cheers and applause, like royalty, signifying approval from at least those close enough to the photo pits to see the happy couple. The general consensus was that of looking forward to next year, when maybe they book a little stronger and improve upon an already solid foundation for LA’s new mainstream music festival. Here’s hoping they make that happen.

Made in America Los Angeles 2014: From Worst to Best