Foo Fighters celebrated the premiere of their new HBO series, Sonic Highways, with an intimate 800-person capacity concert at the Cubby Bear in Chicago, Illinois on Friday night. Dave Grohl repeatedly told the audience that this was “the weirdest night of my life,” as the Cubby Bear was the place he saw his first concert in 1983. Even more surreal, the band was joined on-stage by Jeff Pezzati, frontman of Naked Raygun, the band who Grohl saw perform live at that concert.

After screening the first episode of Sonic Highways, Foo Fighters hit the stage just after 11 p.m. CT and proceeded to play a 22-song set of greatest hits, rarities, and covers, along with the live debut of their new single, “Something From Nothing”.

Highlights included “Up in Arms”, which Grohl dedicated to Chicago producer Steve Albini; covers of Cheap Trick’s “Stiff Competition” and “Surrender” featuring the band’s founding member Rick Nielsen on guitar; an extended jam version of “This Is A Call” during which Grohl played from atop the bar; and a cover of Naked Raygun’s “Surf Combat” featuring Pezzati on vocals. The setlist ended with Neilsen returning to the stage to perform on”Something From Nothing” before the band concluded the evening with “Everlong”.

The only thing preventing Foo Fighters from continuing on with their performance was the venue’s 1 a.m. curfew, leading to the creation of Grohl’s new favorite catchphrase. 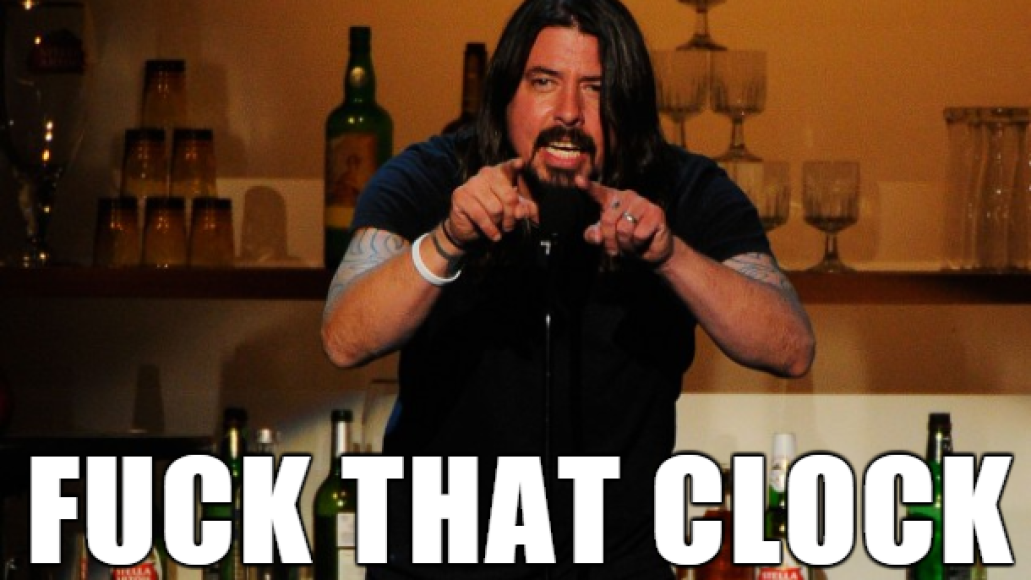 When it was all said and done, Foo Fighters performed for nearly two and a half hours — and fifteen minutes past the 1 a.m. curfew. Below, watch a series of fan-shot clips from the show below, along with the full setlist.

Also on Friday night, Foo Fighters concluded their week-long stint on the Late Show with David Letterman by performing “Something From Nothing” (the episode was filmed on Thursday night). They also did a list of the “Top Ten Things Foo Fighters Would Like to Say After Spending a Week at the Late Show.” Watch both below. And if you missed any of this week’s other performances, you can replay them here.