Welcome to Shelf Life, the bi-monthly series in which Ryan Bray combs through his record collection and gets reacquainted with the lost treasures within. Last time, Ryan discussed why punk compilations have everything you need. This week, he heads back to 1994 by revisiting Lync.

“And you’ve proved once again in the bubble that you only need your own air to breathe.

A few years back, the A.V. Club did a series called “My Favorite Music Year.” The objective was simple enough: A.V. Clubbers took turns writing at length about the musical year in their personal canons that resonated with them the most. It was a fun series, and I highly recommend you check it out. Anyway, through that series I found that Nathan Rabin and I both share an affinity for the musical year that was 1994. I remember that year being one massive score of riches across the board. You had Green Day’s Dookie, Stone Temple Pilots’ Purple, Weezer’s Blue Album, Beastie Boys’ Ill Communication, Bad Religion’s Stranger Than Fiction, and Soundgarden’s Superunknown, just to name a few. It was enough to make a doe-eyed sixth grader’s little brain explode. I just remember being overwhelmed in the best way possible by everything that was coming at me.

But the coolest thing about my connection with 1994 was how my appreciation for it only continued to grow over the years. At the time, I was clinging onto everything that was being served to me on a hot plate courtesy of radio and MTV. But, as the years went by, I started to find out more about all of the other great music that came out in 1994 that was bubbling just beneath the surface. Blur came out with Parklife, Superchunk released Foolish, Archers of Loaf graced the world with the classic-in-waiting Icky Mettle, and, of course, there was Pavement, the gold standard of purebred American indie rock, who continued to proudly wave the flag from on high with the release of Crooked Rain, Crooked Rain. In retrospect, it really seems like barely a week went by without something new and amazing breaking loose to rattle the inside of your eardrums. Anyone who still wants to make an argument that the ’90s weren’t a great time for music could learn a lesson by digging back 20 years into the vaults. 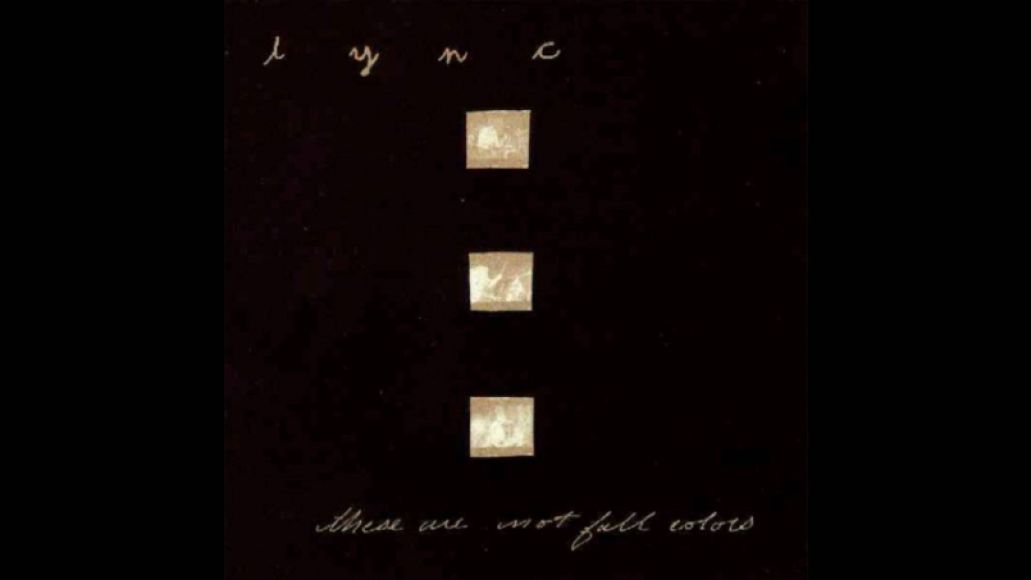 Swept up in the current somewhere amidst all that mid-’90s indie rock glory was an unassuming band from the Pacific Northwest doing their due diligence in the leanest, scrappiest way possible. Lync didn’t have the clout, the muscle, the underground acclaim, or buzz that any of those other bands had, but it didn’t keep them from making one of the purest, rawest records of that high-water indie rock era. The best way to describe These Are Not Fall Colors is to say that it sounds exactly like everything the ’90s indie rock movement stood for. It was jarring, loose, loud, and explosively emotive. It wasn’t pretty, but it had a shitload of angst-ridden heart. It was the kind of music that lived in the van, music you took out on the road to small, scarcely attended hole-in-the-wall clubs only to return home with little more than a bundle of sweat-stained luggage. In other words, Lync were a band that lived out the purist indie rock ethos of the ’90s, and These Are Not Fall Colors was its noisy, cantankerous vessel.

Don’t ask me how Lync and I crossed paths. When I pulled it off the shelf about a week ago, I did a quick mental scan to try and find out the backstory (where I got it, how I first managed to hear of them, etc.), but my brain registered zero returns on my search. I do know it was a post-college grab, though, somewhere in or around 2006. College was something of a well-deserved breather from my borderline-debilitating habit of buying new music week in and week out, but that all changed after graduation. With a full-time job and replenished funds, I quickly made up for lost time. Amazon was pretty key at this time, seeing as you could buy a used copy of just about any record for as little as two or three bucks. So, I’d scour the web for columns, reviews, and pretty much anything else that pointed me in the direction of some new stuff, or old stuff that was at least new to me.

These Are Not Fall Colors, I’m pretty sure, was one such record I picked up on the cheap, and it’s one that repaid me tenfold on the minimal investment. Right from the opening notes of album opener “B”, I knew I was going to make fast friends with the record. The lo-fi production, the way the bottom-heavy bass fuzz takes center stage amidst the chaos, the wayward guitar, and the throaty vocal delivery from frontman James Bertram hit pretty much everything on my checklist. I heard bits and pieces of a lot of my old favorites, namely Fugazi, Sebadoh, and Unrest, but at the same time they also sounded ready and willing to take their ugly post-punk influences in their own direction. Their sound was far more unkempt than, say, Fugazi’s, but it was also rooted a lot more in pop. Underneath the sonic scourge of tracks like “Perfect Shot”, “Pennies to Save”, and “Cue Cards” were songs with hooks that stuck in your head. Not content with simply playing the role of the jaded, indie rock kids, Lync went a step further and wrote solid songs that cut through the posturing.

In true indie rock fashion, These Are Not Fall Colors was met with minimal fanfare beyond the underground community upon its release, although it’s quietly scaled the ladder over time to attain a certain amount of well-deserved grace and respect. Lync themselves folded soon after the record’s 1994 release, but its members would later resurface in more successful acts such as Love as Laughter, Red Stars Theory, and Built to Spill. But while it might be a minor league all-star of the ’90s indie rock cannon at best, there was a significant trickle-down effect that came with discovering These Are Fall Colors. It ended up being one of a very small handful of records that inspired me to dig deeper and unearth 1994’s other great musical finds. I eventually found my way to Suede’s Dog Man Star, Guided by Voices’ Bee Thousand, and a whole host of stuff from K Records, the legendary Olympia label that gave rise to a whole host of amazing bands, including Lync. Twenty years later, it just feels like an appropriate time to give this unsung underground hero its due. Thanks for rekindling the spark in my favorite musical year.

How Lync Helped Me See 1994 in New Colors