Jack White’s 2014 headlining performance at Bonnaroo is widely considered one of the greatest sets in the festival’s 13-year history. Now, the gig will be forever immortalized in a new three LP vinyl package, which headlines the latest installment of Third Man Records’ subscription series The Vault.

The live album has been mixed by Third Man’s in-house engineer, Vance Powell, “and stands as a marked improvement over the on-the-fly board mix heard in webcasts, YouTube uploads and shady downloads,” according to a press release. The vinyl will come pressed on white, blue, and black, “housed in a soft-touch, telescoping box, topped off with a lenticular television on the cover.”

The package also includes a DVD of the full performance, re-edited from the original raw footage by Brad Holland, as well as 8×10 photographs from the concert, a customized Jack White patch, a backstage pass sticker, a poster., and a custom-designed USB drive with bonus material.

White’s Bonnaroo set spanned 26 songs at two-and-a-half hours (some 45 minutes longer than their originally scheduled set time). The setlist was comprised of material from White’s entire career, including songs by The White Stripes, The Raconteurs, The Dead Weather, and his two solo albums. Among the highlights, “Icky Thump” serving as set opener; the first performance of “Astro” in over three years; a cover of Led Zeppelin’s “The Lemon Song”; and “Seven Nation Army”, during which the entire field of 70,000+ sang along. Below, watch video of the full performance as ripped from the webcast. 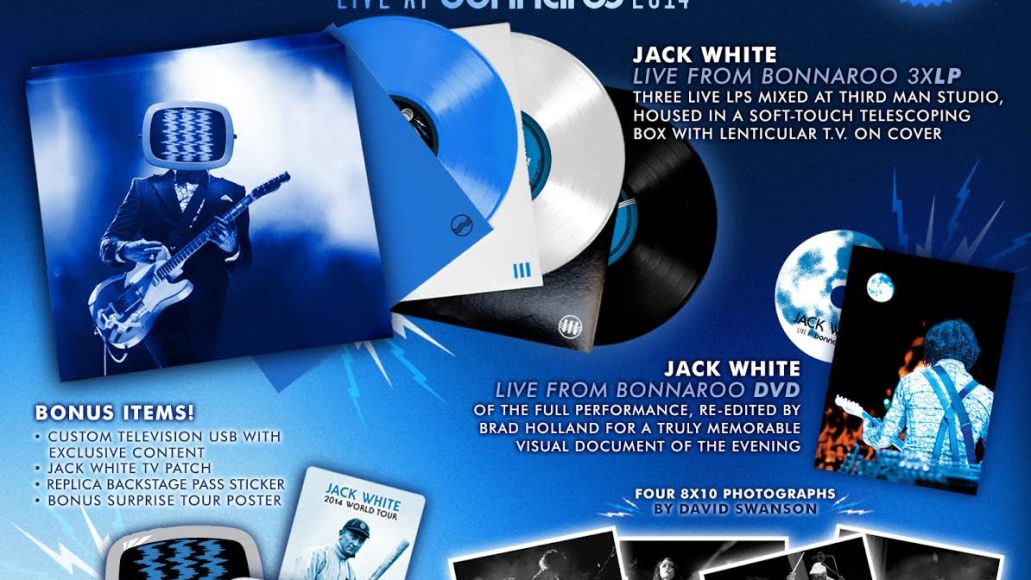