When Brian Molko looks out at a crowd, he really, really looks. He peered over his guitar during a solo early in Placebo’s set at the House of Blues Chicago last night, and his eyes darted from person to person, not scrutinizing the crowd as a whole, but as a group of individuals gathered for Placebo’s first tour through the US in seven years. His attention felt specific, like whatever was suspended between the band and its audience could break at his first lapse in care.

For such a seasoned band (they debuted in 1996 and have released albums every few years since then), Placebo don’t throw out too many tricks onstage. They play with confidence, not bravado; their arrangements, fleshed out by three extra musicians on tour, are lean and strike close to the energy of their studio recordings. They don’t really banter. For them, it’s about the songs and the people in the room who are there to hear them. That’s all there is. 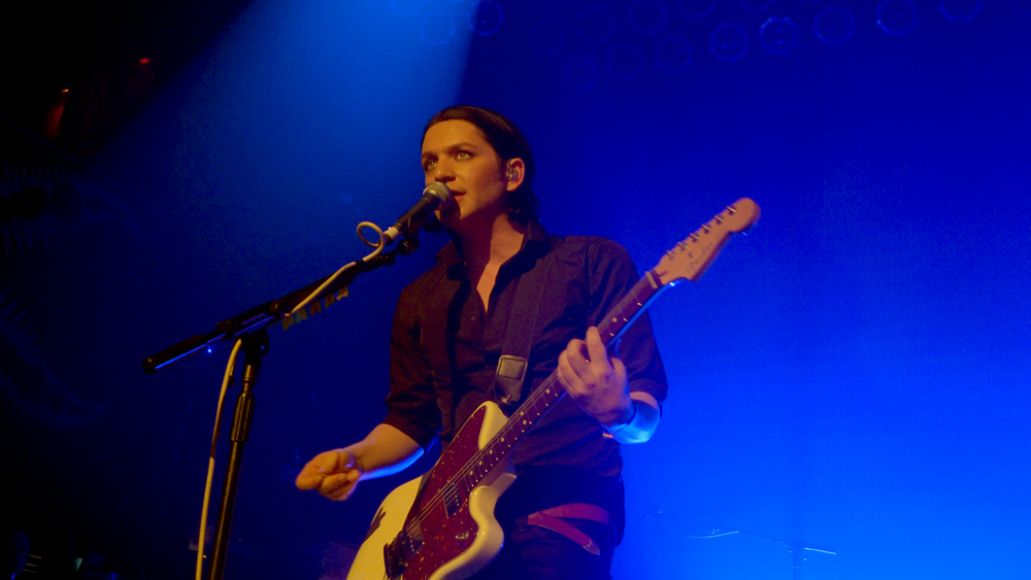 Last night, that was a House of Blues packed with fans who had been waiting years for the band to return to the States. Some of them were probably Placebo lifers, people who signed on in the late ’90s and never hopped off. Some might have filtered in after last year’s Loud Like Love. Maybe a few had the same history with the band that I did: huge fans in high school who fell out around 2006, when Meds marked a turn away from the rough edges of Placebo’s first four records into more crowd-pleasing singles.

Placebo slipped through the cracks critically even with those early albums. They never made it onto the iPods of the early aughts’ tastemakers, though their listener base has always been strong. I never saw them perform in the peak of my teen fandom, but when they came onstage after a stirring set from openers the Moth & the Flame last night, they stepped out just as I remembered them. Molko had the same haircut and eyeliner I saw in press photos 10 years ago. Stefan Olsdal, the band’s bassist and other remaining founding member, loomed as tall as I’d imagined. “Ladies, gentlemen, and those of you who find yourselves somewhere in between: we are Placebo,” said Molko after their first song. 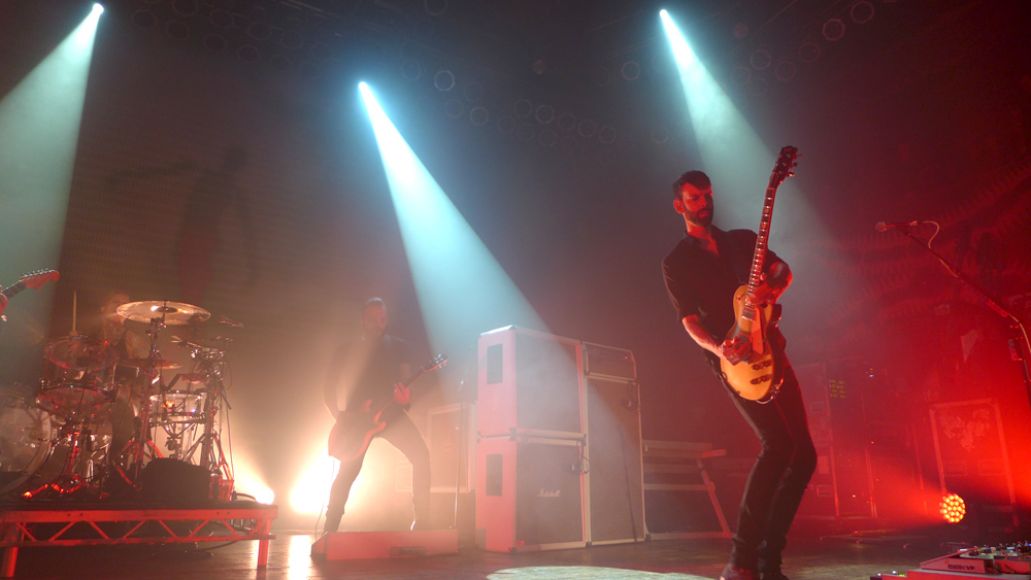 Looking back on it now, I think I hear Placebo radiate onto their more blog-friendly peers. They were doing post-punk revivalism in ’96, and it’s hard for me not to hear a kinship between the lead guitar in their single “36 Degrees” and the tones that would populate the first two Strokes records a few years later. I hear them in the goth-punk bands that overshadowed them, like My Chemical Romance and Fall Out Boy, and in the acts that branched off down a different path like Crystal Castles. But you’ve never been able to group Placebo with a movement. Even “alt-rock” sounds ill-fitting. Their shiny, acerbic pop-punk has stood on its own island for almost two decades.

Molko’s polished androgyny has always been one of the most immediately noticeable features of the band, and it’s part of what made me feel so at home in their music as an angst-filled teen. His vocals fit the part, too: tinny and expressive, they’re instantly recognizable for how neatly they fit between genders. I don’t think I was the only one at the House of Blues who had felt uniquely welcomed by this band as a young person; the floor filled with queers and goths and misfits who finally seemed to be comfortable in their own skin. 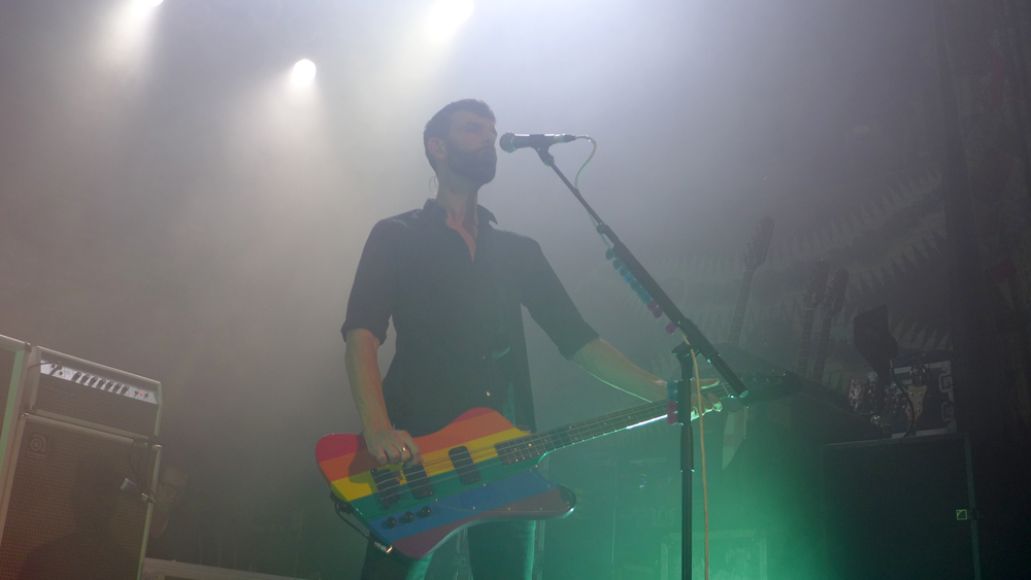 Even before the band came onstage, the room bubbled with the kind of love you don’t often feel at shows. People struck up conversations with strangers around them like they’d been friends for years; by the end of the night, I was taking selfies with people I’d never met before. People paid attention to those around them. You weren’t just another body in a room, but a person there to celebrate being totally in love with this weird, rare band.

And Placebo did their part, muscling through the set list like pros, from old singles like “Every You Every Me” to tracks that came out just last year. I heard a lot of songs for the first time, and I was thrilled to find out that Molko had weighed in on technology without reverting to stale preachiness. “Too Many Friends” starts with the lyric “My computer thinks I’m gay” and builds from there. It’s not an indictment of the Internet so much as a lament about how much easier it is to observe people from the safety of the screen than it is to actually be a friend to them. Molko hashes out the strange abstraction of fandom as seen through the web, but the song assumes a tone of warm sadness instead of vague superiority. He’s not telling you to throw your phone into the ocean. He’s just cracking down on himself for his own complicated feelings about being so broadly seen by strangers. 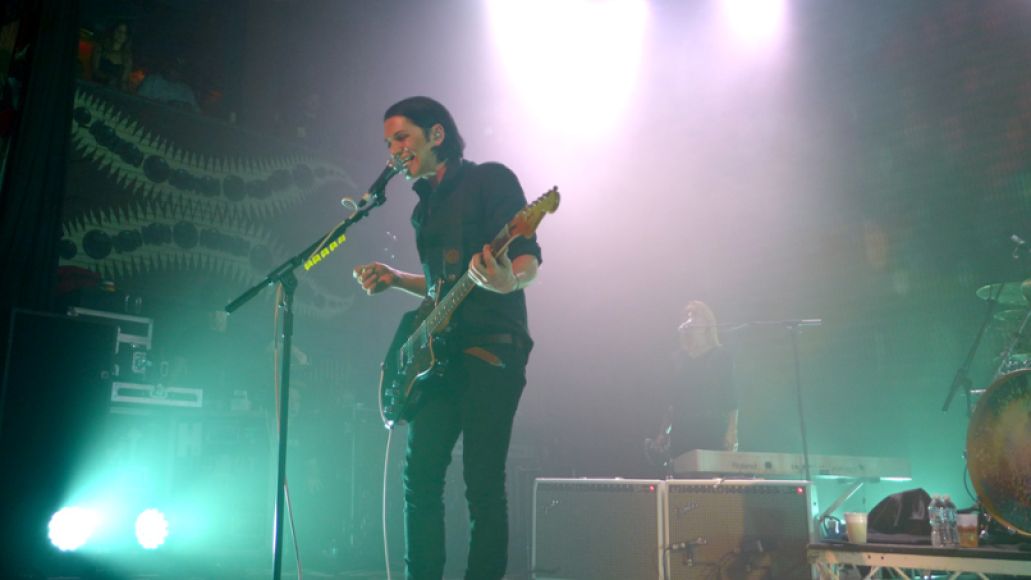 I think that’s what keeps this band kicking. They never sneer. They flush their trebly guitar punk with humanity even as they snake through the heavy stuff, like addiction and insecurity and abuse and being queer in a world where it marks you as an anomaly at best and an aberration at worst. Their music runs sad, but it always keeps its bite, because when you sum it all up, it’s about doing what you have to do to survive — and then sharing the joy of that survival with the people around you who made it, too.

Setlist:
B3
For What It’s Worth
Loud Like Love
Every You Every Me
Scene of the Crime
A Million Little Pieces
Twenty Years
Too Many Friends
Rob the Bank
Purify
One of a Kind
Exit Wounds
Meds
Song to Say Goodbye
Special K
The Bitter End
Encore:
Begin the End
Running Up That Hill (Kate Bush cover)
Post Blue
Infra-red