Yesterday, Marvel Studios confirmed that British actor Benedict Cumberbatch (Sherlock, Star Trek) has been cast to play Doctor Strange in an upcoming adaptation. As it turns out, the news was just a very small preview of the studio’s future plans, as today studio president Kevin Feige has announced a bevy of upcoming projects featuring some of Marvel’s most beloved comic characters.

As SuperHeroHype points out, Marvel has taken steps to maintain momentum with its competitor, DC Comics, who recently announced their own slate of film projects through 2020. As of now, here’s how Marvel’s schedule is set to breakdown through late 2018:

— The aforementioned Doctor Strange film is scheduled to hit theaters on November 4th, 2016.

— The sequel to the highly-lauded Guardians of the Galaxy will land on May 5th, 2017.

— As previously reported, Robert Downey, Jr. will return as Iron Man for the third Captain America film. Entitled Captain America: Civil War, the film will deal with a “global superhuman registration with a specific inciting incident” and that “secret identities aren’t as important in the MCU version of the story.”

— The third Thor film, subtitled Ragnarok, will hit theaters on July 28th, 2017. Both Chris Hemsworth and Tim Hiddleston will reprise their roles as Thor and Loki, respectively. Feige said that the film will deal with the fallout of the preceding Avengers: Age of Ultron film (which is scheduled for May 1st, 2015).

— Speaking of the Avengers, Marvel has shared titles and release dates for two more sequels: Infinity War Part 1 lands May 4th, 2018, and Part 2 is slated for May 3rd, 2019. In the comics, the Infinity War deals with the struggle over the Infinity Gauntlet, powered by the mystical Infinity Gems (or, as they’re referred to in Guardians, the Infinity Stones.)

— In one of the bigger announcements, Feige confirmed Black Panther is getting his own film. Due out November 3rd, 2017, the pic is set to star Chadwick Boseman, who previously played Jackie Robinson in 42 and James Brown in Get On Up. Black Panther is a prince of the fictional nation of Wakanda, who has superhuman abilities comparable to that of Captain America. The character has long been affiliated with both the Fantastic Four and the Avengers.

— Two more films include a Captain Marvel film, featuring the Carole Danvers version of the character, that’s due out July 6th, 2018. The Inhumans, which focuses on a fictional race of royal mutants, hits theaters on November 2nd, 2018.

Check out the full lineup along with each film’s respective teaser art below. 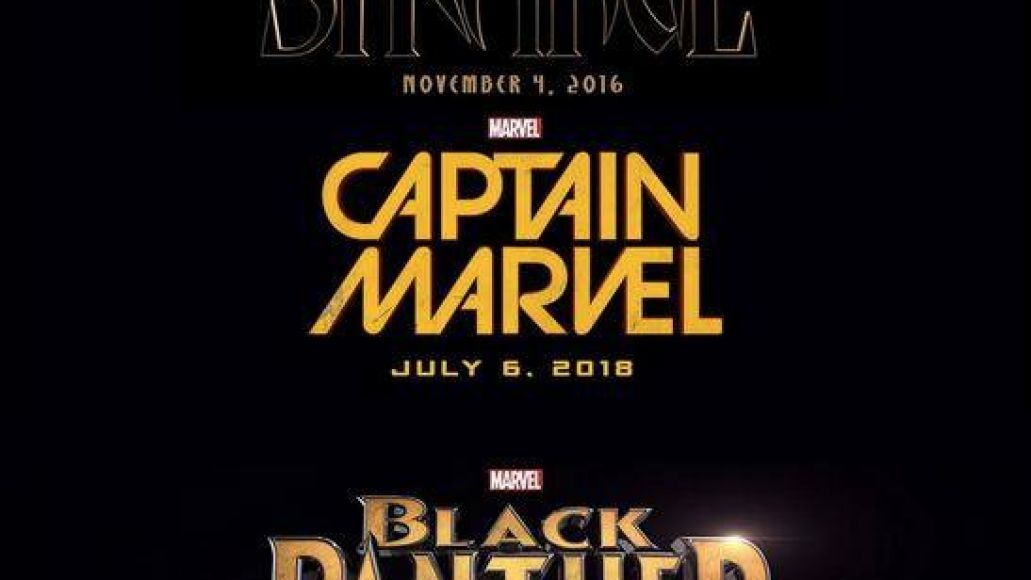