On Monday night, Father John Misty’s J. Tillman appeared on the Late Show with David Letterman to announce the release and premiere the first taste of his upcoming sophomore solo album. Entitled I Love You, Honeybear, the follow-up to 2012’s Fear Fun was produced by Tillman and frequent collaborator Jonathan Wilson, mixed by Phil Ek, and mastered by Greg Calbi at Sterling Sound. A release date is set for February 10th via Sub Pop Records.

Backed by a full string orchestra, Tillman previewed the release on Letterman with a stirring rendition of album track “Bored in the USA”. The satirical folk ballad included a sample of canned audience laughter and these choice lyrics: “Bored in the USA/ Oh, they gave me a useless education/ And a subprime loan on a craftsman home/ Keep my prescriptions filled, and now I can’t get off/ But I can kind of deal/ With being bored in the USA.”

Watch the Letterman performance below, followed by the album’s tracklist and artwork, along with an itinerary for Father John Misty’s upcoming world tour. Additionally, he’s shared a letter discussing the scope of the album.

I Love You, Honeybear Artwork: 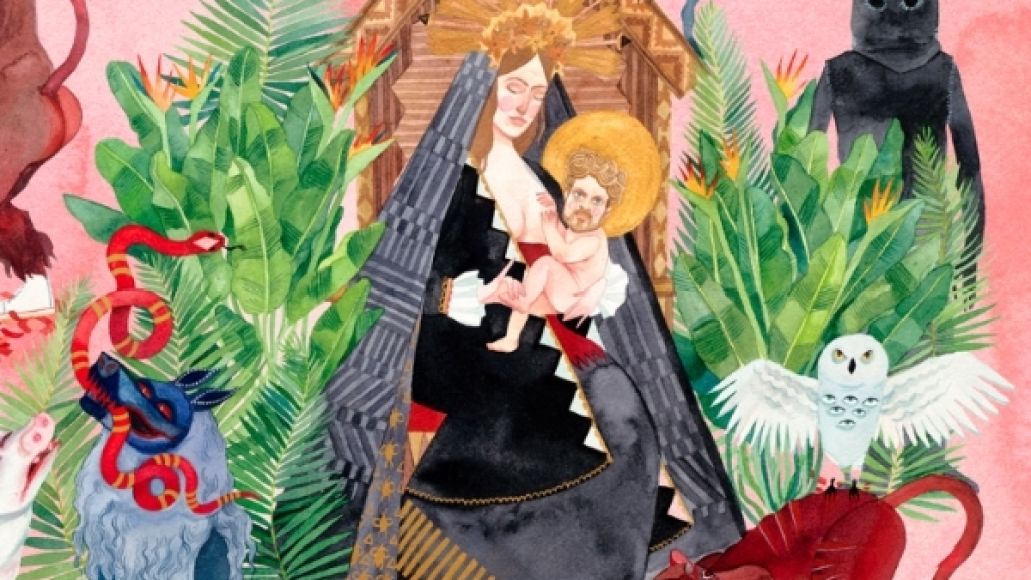 All CD and LP formats will come with a fold-out poster, featuring a collage of Emma Tillman’s intimate photos, designed by Alia Penner and an extensive “Exercises for Listening” written by Josh Tillman. Additionally, CD and LP preorders will come with 8 demos on cassette (while supplies last). There will also be two new t-shirts available, as stand-alone items or as part of a bundle with preorders of I Love You, Honeybear.

Father John Misty aka Josh Tillman, says of the album, “I Love You, Honeybear was recorded all through 2013 to 2014 in Los Angeles with producer Jonathan Wilson, who I also recorded and produced 2012’sFairly Fun with. There’s a case to be made that it sounds and acts a bit like solo-era John Lennon, Scott Walker, Randy Newman, Harry Nilsson, and Dory Previn, while taking more than a few cues fromWoody Allen, Kurt Vonnegut, Alejandro Jodorowsky and Muhammad Ali. It has a decidedly more soulful presence than Fear Fun, due in no small part to the fact that I am truly singing my ass off all over this motherfucker. The album is really characterized by the scope and ambition of the arrangements. Nearly every tune is augmented by something special, be it orchestral strings, a mariachi band, questionable electronic drum solos, ragtime jazz combos, soul singers, or what have you.  I’m pretty sure there’s a sitar in there somewhere. Blammo.

“I Love You, Honeybear is a concept album about a guy named Josh Tillman who spends quite a bit of time banging his head against walls, cultivating weak ties with strangers and generally avoiding intimacy at all costs. This all serves to fuel a version of himself that his self-loathing narcissism can deal with. We see him engaging in all manner of regrettable behavior.

“In a parking lot somewhere he meets Emma, who inspires in him a vision of a life wherein being truly seen is not synonymous with shame, but possibly true liberation and sublime, unfettered creativity. These ambitions are initially thwarted as jealousy, self-destruction and other charming human character traits emerge.  Josh Tillman confesses as much all throughout.

“The album progresses, sometimes chronologically, sometimes not, between two polarities: the first of which is the belief that the best love can be is finding someone who is miserable in the same way you are and the end point being that love isn’t for anyone who isn’t interested in finding a companion to undertake total transformation with. I won’t give away the ending, but sex, violence, profanity and excavations of the male psyche abound.

“My ambition, aside from making an indulgent, soulful, and epic sound worthy of the subject matter, was to address the sensuality of fear, the terrifying force of love, the unutterable pleasures of true intimacy, and the destruction of emotional and intellectual prisons in my own voice.  Blammo.

“This material demanded a new way of being made, and it took a lot of time before the process revealed itself.  The massive, deranged shmaltz I heard in my head, and knew had to be the sound of this record, originated a few years ago while Emma and I were hallucinating in Joshua Tree; the same week I wrote the title track.  I chased that sound for the entire year and half we were recording.  The means by which it was achieved bore a striking resemblance to the travails, abandon and transformation of learning how to love and be loved; see and be seen.  There: I said it.  Blammo.”