Despite the relative hassle of going to a movie theater these days — chattering audiences, crinkling candy wrappers, ridiculous ticket prices and even more ridiculous concession costs — most of us still enjoy going out and seeing a flick every now and then. In fact, Google recently teamed with Millward Brown Digital in a study (via The Playlist) that found 68% of Americans (i.e. those in the US) and Canadians saw a movie in theaters last year. That’s a staggering 228.7 million people, 11% of whom went twice a month.

But knowing how many people go to the movies begs the question: What does it take to get people into seats? For some, it’s as simple as a name or an association; I, for example, can tell you exactly what movie I’m going to be seeing on July 6th, 2018. But, apparently I’m an exception.

According to Google/MBD’s data, 70% of moviegoers don’t actually choose the movie they’ll see until they’re at the theater. What’s more, what they actually choose depends on a number of factors. Those who pick comedies are drawn in by the cast, action fans look at the director, and horror lovers seem to care more about convenient showtimes than who’s doing the hacking and slashing. Not that these folks go to their local AMC without knowing at least what’s out there, of course. 4 out of 5 moviegoers will use YouTube to learn about a film, with 39% mostly influenced by trailers, three times more than those influenced by the cast or a peer’s opinion.

Now, that YouTube statistic might not be all that surprising (where are most trailers hosted, after all?), but what those viewers also watched is interesting. With the immense number of films coming from DC and Marvel Comics these days, it makes sense that people looking at franchise trailers also search for comic content. But action fans are more likely to look at comedy content than comedy fans, who in turn check out video game material more than action fans. And who’s more interested in soundtracks? The same people looking at family-friendly film options.

The data provides an idea of how your average filmgoer will choose to spend their $12 on a ticket, as well as giving us a fascinating look at what type of people make up a theater audience. Check out the full inforgraphic below. 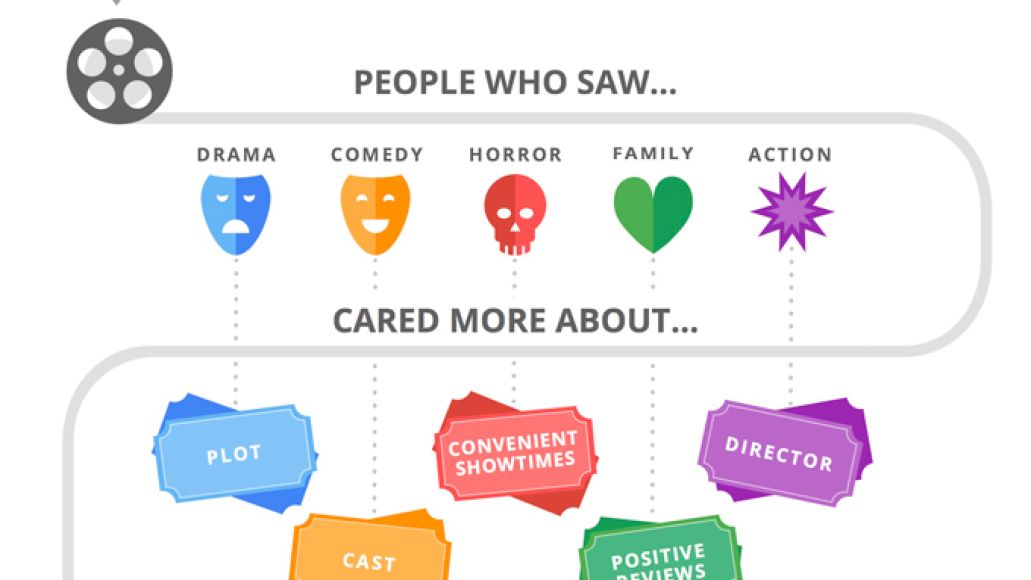