Eminem has stirred up a lot of controversy over the last few days for being Eminem. Earlier this week, he compared himself to Ray Rice and rapped about physically assaulting Lana Del Rey in a Cypher promoting his label’s new record. Last night, the Detroit MC drew even more heat for his headlining performance at the inaugural Concert for Valor in Washington, DC.

However, Eminem’s performance proved controversial from the very start. He shouted, “Happy motherfucking Veterans Day!” after dueting with Rihanna on “The Monster”, and proceeded to run through “Not Afraid”, “Lose Yourself”, and more, naturally dropping a handful of f-bombs along the way.

Apparently, folks who tuned in for a wholesome concert supporting our troops weren’t expecting such foul-mouthed language to be part of the festivities (nor were they likely expecting protest songs like “Fortunate Son” and “Born in the U.S.A.”).

With the gun shot effects, swearing, lyrics, I don't think Eminem was the best choice for #ConcertForValor…

Turning off HBO after all the swearing coming out of EMINEM..they cld have put him on later..after kids like myself have gone to sleep

Those who brought the kids to #TheConcertforValor are regretting it now. I don't think the F-word belongs in any Veteran's Day greeting

Conservative websites were also quick to jump on the performance; Eminem’s “HBO CONCERT SHOCK” has remained the lead headline on The Drudge Report for over 12 hours. 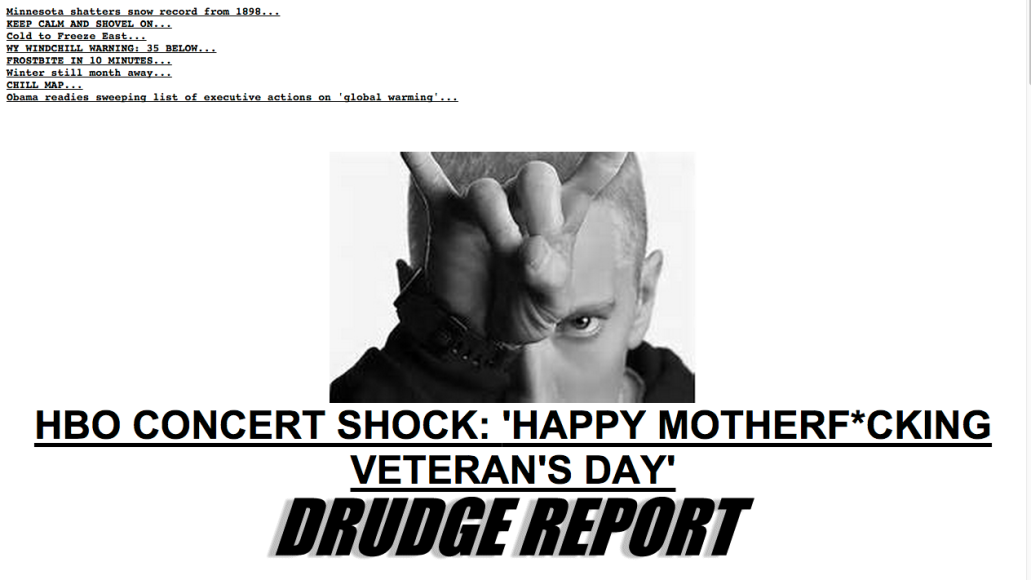 Certainly, it’s hard to imagine Starbucks or Chase, the companies behind the event, didn’t know they’d be getting some cussing when they tapped Eminem as their headliner. And if they didn’t, our own Alex Young may have said it best:

To parents who took young children to an Eminem concert: next time leave early … or Google what to expect beforehand.

Watch footage of Eminem’ performance below.