Under the Skin begins with the tiniest bit of light burning in the center of the screen. The light grows brighter and brighter before we realize it’s forming a human eye — or at least a copy of what a human eye would look like. If played on mute, this opening is strange, bold, and oddly beautiful, as it builds and builds. With Mica Levi’s “Creation” score, the scene changes. The birth of Woman (played by a subtly brilliant Scarlett Johansson) can still be appropriately described with the adjectives above, but a new component is added: one of fear. Not only is the “Woman” born, but we know without seeing her fully formed that we should be very, very afraid of her.

Levi’s strings play at a frenzied pace but never stray from course. They overlap, they repeat, but they never grow tiresome. They only serve to increase the tension of what we are witnessing in Jonathan Glazer’s third film, transferring it from the genre of science fiction to horror. Few movies in history have been so affected by their original score. Compare it to the genius of Bernard Herrmann’s compositions for Hitchcock’s Vertigo and Psycho, scores that do wonders for both films. They highlight the mystery, romance, and terror each film contains, as well as heighten the drama and horror unfolding before our eyes.

Herrmann is a genius. Ennio Morricone is too. So are Hans Zimmer and James Horner. The list goes on. But, have any of these composers accomplished what Levi accomplishes with Under the Skin? There are greater scores than Levi’s, certainly some by the composers I’ve mentioned, but her work on Under the Skin is unique. It doesn’t just enhance, compel, or frighten. Her score shifts everything into a new perspective.

The film is Levi’s first as a composer — light years away from her pop-friendly though unconventional work with Micachu and the Shapes, but a very confident piece of work. Much of it relies on repetition, yet the score itself never feels repetitive. Its simplicity best defines that of Johansson’s character, whom we witness learning all about humanity and its surroundings/trappings as the film marches on to its own beat — literally, in this case.

What little dialogue there is in Under the Skin is mostly improvised. Several of the men who Woman picks up along the way were unaware a movie was being filmed, and the conversations between them and a British-accented Johansson were shot with hidden cameras. This gives the film the feel of a silent movie, leaving Levi the responsibility of filling in those empty and quiet spaces.

Let’s start from the beginning. When Jonathan Glazer approached you about scoring the film, how familiar was he with your earlier work?

He listened to some of Chopped and Screwed — an album that Micachu and The Shapes did with the London Sinfonietta in 2011​.

As opposed to most modern-day films, Under the Skin is driven more by music than it is dialogue. How did this affect your approach to the compositions?

The whole experience was lead by her. We just follow her, and she doesn’t spend much time with people conversing. Music’s role in the film is traditional in that it’s thematic​ perfume. This isn’t something she is feeling but rather putting on as a tool to entrance. Cymbals and bass throughout represent the greater forces of the cosmos, nature, etc. 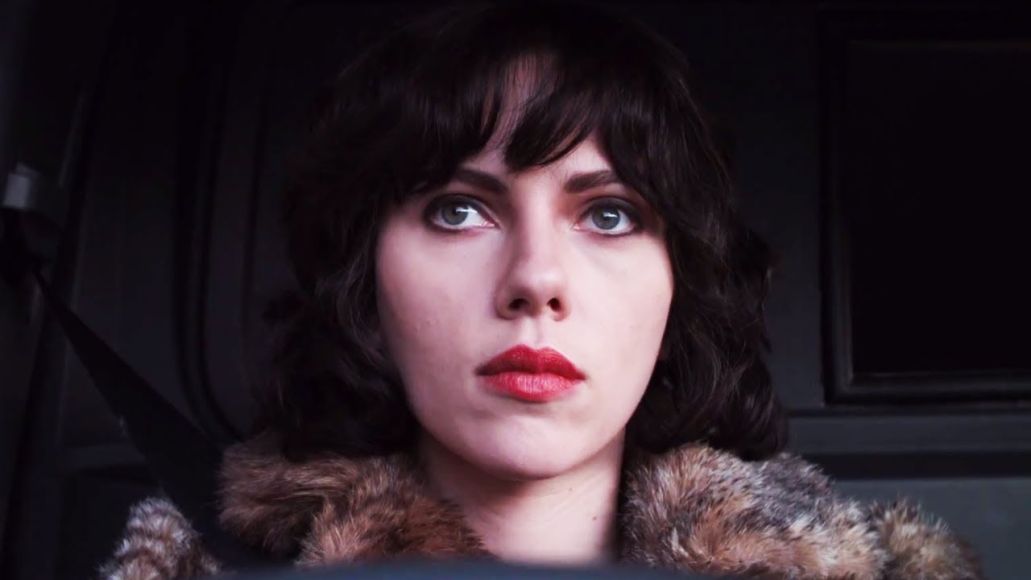 Your work with The Shapes can be categorized as pop-oriented in a non-traditional sense. How would you describe this score? I’m guessing not as “pop”?

​Not as pop. I would describe it as a film score as opposed to a soundtrack, because I think of soundtracks as compilations of many different pieces of work made by different people and a score as a thorough composition by a single composer​.

Of Kubrick’s influence on the movie, Glazer confessed, “I’ve picked his pockets, really. People politely say ‘homage,’ but I probably stole his wallet.” To that end, did he cite György Ligeti, whose compositions are used in several Kubrick films, as someone to listen to as a reference?

​Not explicitly, although I’ve listened to a lot of Ligeti in my life, especially at school and at college, so there’s no denying he is generally of great influence. I wrote something for the opening sequence at some point, and [Jonathan Glazer] came in and said, “Yeah, it’s alright, but it sounds like fucking Ligeti–fuck that,” and started talking about the Sex Pistols and Sid Vicious especially. That lead to the insistence and almost fidgety droning of the beginning. That’s Jon saying, “GO H.A.M. OR GO HOME!”

“Death”, the piece and the theme, dominates the movie. How many different versions of this specific piece did you create before reaching the finished version, and how did you realize you landed on the right tone and instrumentation for it when you did?

The melody was from something I recorded on viola and then improvised over​. It was too busy for the scene, and we were focusing on the void, and it called for a seductive, plainer, confident thing. I recorded viola on my computer in a break, and when [Jonathan Glazer] and [Peter Raeburn] came back in, I played it to them. Jon was popping his neck, so I knew that was a good sign; the rest of the cue and other cues with that theme were worked out backwards from there. After months of working on it, I told Jon and Pete​ I thought it was shit and that we should just have a held note. They told me to get lost; they were right! ​I was​ just​ really sick of it at the time. Anyways,​ perhaps I did ​10 versions? 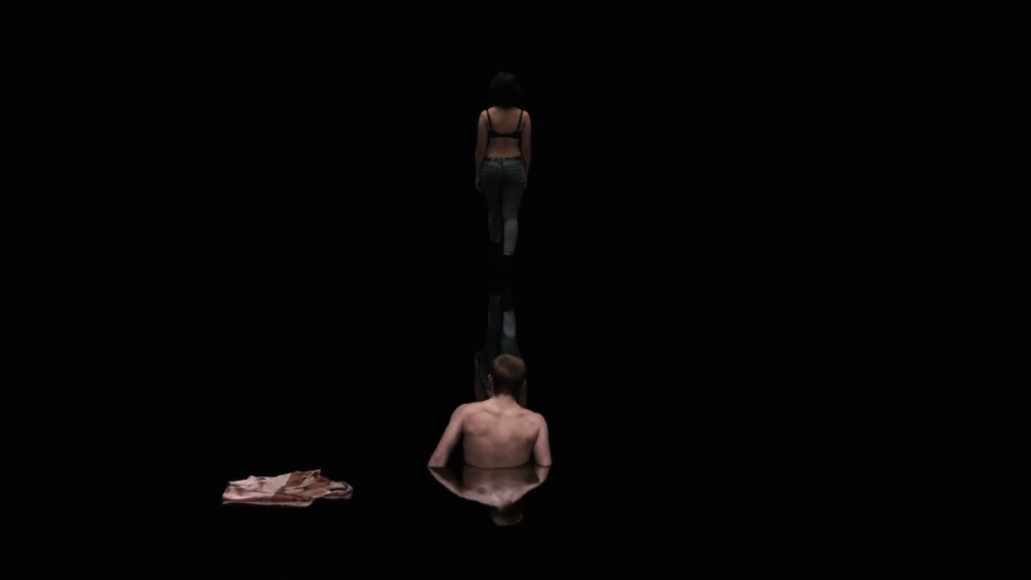 ​​What feedback have you received this year from people on the street who have seen the film? Have any of them blamed you for recurring nightmares based around your score, or is that just me?

I’ve met some people very affected by the film, and a lot of people say it creeps them out. Sorry, me and [Jonathan Glazer] should be working on a nice image and sound bath for afterwards!

You told the The Guardian back in March that you “took a lot of inspiration from strip-club music and euphoric dance.” I have to ask: how unsettling and eerie are strip clubs in the U.K.?

​The love stuff is from euphoric dance. I was working out the feeling of making out for the first time or taking ecstacy-rushing, warm synth pads, and it felt like love. Strip clubs are pretty unsettling and eerie, so yeah, that’s part of its vibe. I thought like dark and viscous,​ not clean and tidy​.

Next month, you’ll be conducting the score with a 25-piece orchestra while the movie plays at L.A.’s Regent Theater. It’s one thing to play a song while films project on a screen behind you, but in this case it’s flipped and you’re serving the images. Have you run into any challenges?

​I have to conduct the whole thing to a click track, which is hard. It’s like boxing, no blinking, no passing the ball, no smiling, etc.​ It’s nice to not look at the audience and to see everyone playing, concentrating like boxers as well. 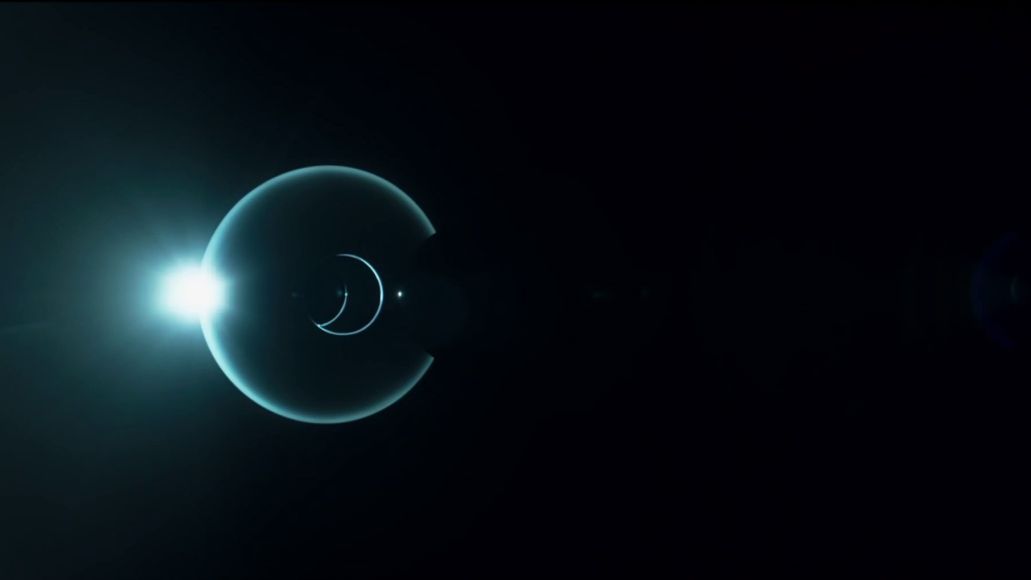 Is there any interest in holding these special screenings in other major markets?

​I don’t know. The score will get published, which is the greatest honour, and hopefully that means it has a future and longevity beyond us​ and can get used as a piece of work or a part of a piece​ of work. Different groups playing it is basically amazing.

This is your first film score. How would you describe the overall experience, and can you see yourself composing more in the future? If so, would it have to be for a different type of movie?

​It was all a trippy dream. I would do it again if I was in the right mood and around my friends and it was day time and I trusted everyone and had nothing to do the next day. But, of course, it would be different.

Composer of the Year: Mica Levi