In two apartments in Chicago there lived two Gerbers. Not nasty, dirty, wet apartments, filled with the ends of worms and an oozy smell, nor dry, bare, sandy apartments with nothing in them to sit down on or to eat: They were bachelor pads, and that means comfort…

Justin Gerber (JG): In six months’ time, there will be an incredible re-edit of Peter Jackson’s Hobbit trilogy. This undertaking will have nothing to do with Warner Bros. or New Line, nor will the director himself be taking part. No, this edit will come courtesy of a fan whose love of the books and frustration with the films leads him or her to trim the fat and chop out the scenes that turned J.R.R. Tolkien’s classic fantasy novel into a bloated mess. Before that day comes, we are left with three Hobbit movies that should have been one epic Hobbit movie. The final part in said bloated mess, The Battle of the Five Armies, is the alleged final chapter of this saga-that-should-never-have-been, and it has the same issues that plagued the first two films.

All three films are subpar, bogged down with additional material that could easily, easily be expunged from the movie’s runtime with no effect on the main story Tolkien wrote over 77 years ago. This isn’t about being a purist. If movies are too faithful to the novels they’ve been adapted from, something can be lost in the translation. The direction and dialogue from the first two Harry Potter films are practically lifted straight from J.K. Rowling’s pages, and in turn those are the least beloved in the franchise. The movie L.A. Confidential features the same characters from James Elroy’s novel, but several of the cops, mistresses, and criminals from the book were excised or trimmed down for the sake of time and pacing. The new stories in Battle and its preceding films take us away from the main plotline, causing fatal blows to the story’s momentum, and that is why they fail.

As for that main plot: After achieving what they believe to be their ultimate victory early in the film, the group of dwarves, along with hobbit Bilbo Baggins, have to contend with a leader whose greed has overpowered him. And there’s that little problem of approaching armies of men, elves, and orcs who want what they believe to be rightfully theirs. Then there’s a love story, an unnecessary subplot suffering from prequel-itis, Legolas, etc.

Before we begin/continue our own attack on the hobbits, dwarves, eagles, orcs, and elves, let’s discuss what we actually liked about Battle. Mac, what say you?

McKenzie Gerber (MG): First and foremost, we have Martin Freeman as Bilbo Baggins, who is a constant and welcome reminder of what these movies should have been: one fun, family-friendly film with a big heart. Every time Bilbo spoke, there was laughter in the theater. At first I was annoyed with the other patrons, believing their reactions to be in jest, but I soon found myself joining in because Freeman simply kills it in this role. No matter how turned off or disinterested you may get during the film, he reels you back in with that old hobbit charm, reminding you just how much you actually like these characters when they’re present and given material to thrive on. Every scene between Bilbo and Thorin helps re-establish your connection with the story and what you loved from the previous films. 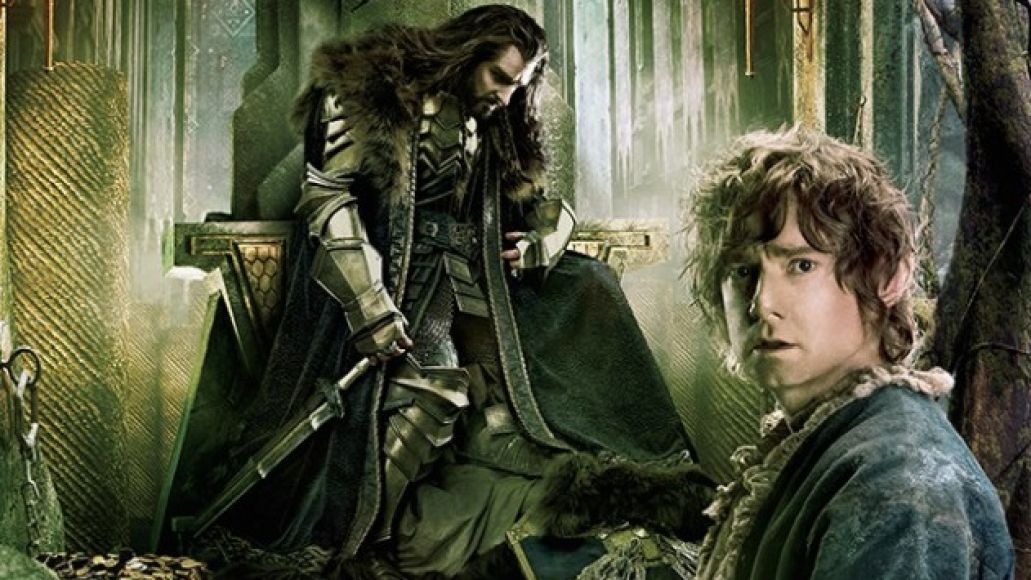 JG: I’m glad you mentioned both Bilbo and Thorin because they are unquestionably the strongest and most necessary parts of the machine that makes up The Hobbit. Richard Armitage as Thorin Oakenshield is the lone dwarf given any real story time in the third film (more on that later), and he gives the role just enough gravitas to have us stick with the movie when it insists upon taking us out of the action. I’d go as far as to offer acclaim to most if not all of the cast members, who seem really invested in the characters and the stories they’re trying to convey. It is Jackson who lets the audience down, along with writers Fran Walsh, Philippa Boyens, and Guilermo Del Toro (who was originally slated to direct these films before delays).

Change can be good, but in the case of the Hobbit franchise, it is decidedly not. Certain sequences seem shoehorned into Battle just to drive home the fact that this is all leading us to The Lord of the Rings. Why is Jackson so insistent on linking these movies together, and can you give some egregious examples?

MG: The reason why Jackson felt he had to drive home the linkage between said films is beyond me. The Hobbit is already clearly linked to the Lord of the Rings; the novel already contains characters such as Bilbo, Gandalf, Elrond, even Gollum (who appears in An Unexpected Journey). There really was no need to “bridge the gap,” so to speak, but he’s done so by adding in some of the most inconsequential plotlines, especially the Necromancer sections of the film. Keeping to the original story, we may not have as much Gandalf, but hey, if that means a more concise, exciting, and focused film, count me in.

Jackson adds in sequences once more from the appendices of The Hobbit novel, which do a disservice to the original Lord of the Rings trilogy if future generations decide to watch the Middle Earth movies in order. The addition of Saruman and Galadriel to Battle diminishes their presence in Jackson’s first trek to Middle Earth back in 2001. Not much time is spent with their characters, and they are clearly thrown in for more unnecessary action. We have a film called The Battle of the Five Armies. Do we really need another excessive action sequence with strictly secondary characters that not only is over within the first 15 minutes but is never again mentioned throughout the rest of the film?

For the fans looking forward to the incredibly built-up “Smaug attacks Lake Town” sequence, you’ll be sorely disappointed. Though the effects are something to behold, the scene ends so quickly it leaves you wondering why they didn’t just tack on 10 more minutes to the previous film and end it there. Speaking of the men and women of Lake Town, what are your thoughts on Bard the Bowman (Luke Evans) and the rest of the “men,” if you please?

JG: We’re given about 10 minutes of screen time to spend with ol’ Bard’s kids, so whenever they’re in peril, I don’t feel anything for them one way or the other. As for another one of the “men” in Lake Town, I’d like to bring up the character of Alfrid. You remember Alfrid, don’t you? He was in Desolation of Smaug for a few minutes and … ah, hell. I don’t remember a damn thing this guy did in that movie, but he is definitely given things to do in Battle. And tell me he doesn’t bear a striking resemblance to R.E.M.’s Bill Berry: 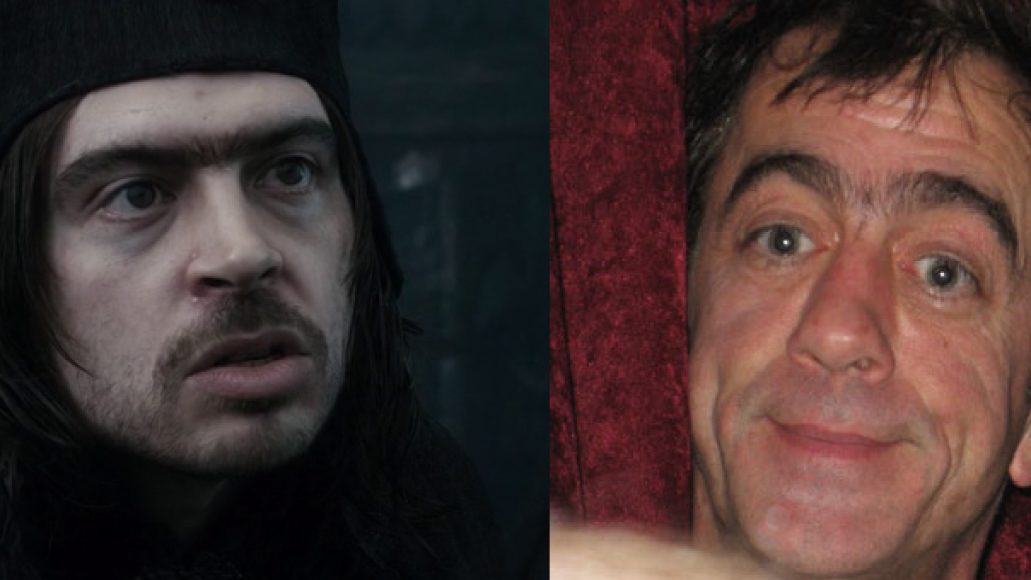 His character is as out of place in the story of The Hobbit as the love story between a dwarf and an elf is. Alfrid is supposed to be the film’s comic relief, but what about the dwarves? Look at them! Thorin’s troops are supposed to be the comic relief. Remember their dinner scene introduction in An Unexpected Journey? What a bunch of knuckleheads! Why does Jackson give Alfrid multiple scenes of goofiness when the great James Nesbitt’s Bofur is left to just kind of hang around in Battle? I don’t recall him having a single line. And therein lies another problem with the “subtraction by adding” business of these films. Most of the dwarves don’t have anything to do in this movie, while these brand-new characters dominate the runtime.

MG: I have to reiterate that the dwarves we have come to know and love … wait a minute. Who are these dwarves? You’ve got three films to flesh out each dwarf and make them interesting, and in the end we know three, maybe four. There is simply nothing for them to do but stand around!

As for the aforementioned love story, the dwarf Kili (Aiden Turner) gets his fair share of screen time pining for Tauriel (Evangeline Lily) and vice versa. I found myself oddly drawn to these sequences in Desolation, but was ultimately disappointed in how they wrap up their story. Theirs was one of the additions I didn’t mind so much, especially knowing the trajectory of certain dwarves in the film, but their tale lands flat, as does Legolas’ corner of the triangle, which is all but a waste.

In the wake of all this disappointment lies a great third portion: the actual battle of the five armies! This sequence is on point and filmed quite well. It moves the film forward and reminds us once more that the book-based sequences simply work. Who doesn’t want to see orcs, elves, men, eagles, and dwarves fight it out? That’s right, we finally get to see an army of dwarves in action (Billy Connolly’s Dain is entertaining, though why they felt they needed to CG his close-ups during his introduction is once again beyond me). Fight sequences are always the forte of these films, and this one delivers some great battles. However, Jackson has trouble wrapping up his seven-hour-plus story with a clear-cut resolution of these battles. Without getting too heavy into spoilers, do you hear what I’m saying, Justin? Truly?

JG: I appreciate Jackson not plaguing Battle with multiple endings, as he did with Return of the King and its numerous fade-to-blacks. The final scenes of the movie are actually quite sweet and bring the focus back to a character who is too often shunted in favor of Legolas and elf/dwarf love — zzzzzz. But to answer your question, Mac, yes. Before we’re left with Bilbo back at Bag End (assuming you’ve seen The Lord of the Rings, this isn’t a spoiler), the story that drives the final film does not have a crystal clear outcome for the various factions who took part in the battle. Jackson is once again preoccupied with being cute about linking The Hobbit and Lord of the Rings as opposed to giving us the film equivalent of “Thanks for watching three f**king movies of The Hobbit, but at least we gave you definitive resolution.”

Well, we’ve fallen victim to the Peter Jackson curse of stretching stories out too long. To sum up our tale/review, The Battle of the Five Armies works when it sticks to the material, and I’m confident a future single-film cut will prove quite enjoyable. In the meantime, we’re stuck with a coda that goes on for too long, with a smattering of pieces that don’t quite fit into any part of the whole puzzle. The trilogy itself proves akin to a double-LP with 10 good songs, leaving you to ask the question: Why didn’t they just release a single album with those 10 good songs?

I’ll leave you with this (see what I did there, Mr. Jackson?):

Film Review: The Hobbit: The Battle of the Five Armies