“If I could do a good English accent, I’d attempt to make a joke right now,” John McCauley said early in Deer Tick’s first set Sunday night at the Brooklyn Bowl. Celebrating the band’s 10th anniversary and fittingly garbed in personalized bowling shirts, they were just getting into the opening songs as they set about covering The Beatles’ Meet the Beatles in its entirety. The evening turned out to be not just the best Beatles gig you could possibly get in 2014, but what will probably be remembered as one of the best Deer Tick shows of all time.

Odds are the other best were earlier and still to come later in the week, but as I wasn’t in attendance for those shows, I can only speculate. Deer Tick had covered two more of the band members’ favorite albums – NRBQ’s Tiddlywinks and Lou Reed’s Transformer – the previous two nights, and are set to tackle Devo’s Q: Are We Not Men? A: We Are Devo! and Elvis Costello’s My Aim Is True in the run-up to their all fan-requested New Year’s Eve blowout. Assuming these other gigs mirror/ed Sunday’s, the band has/had plenty of other surprises and rare moments to deliver. 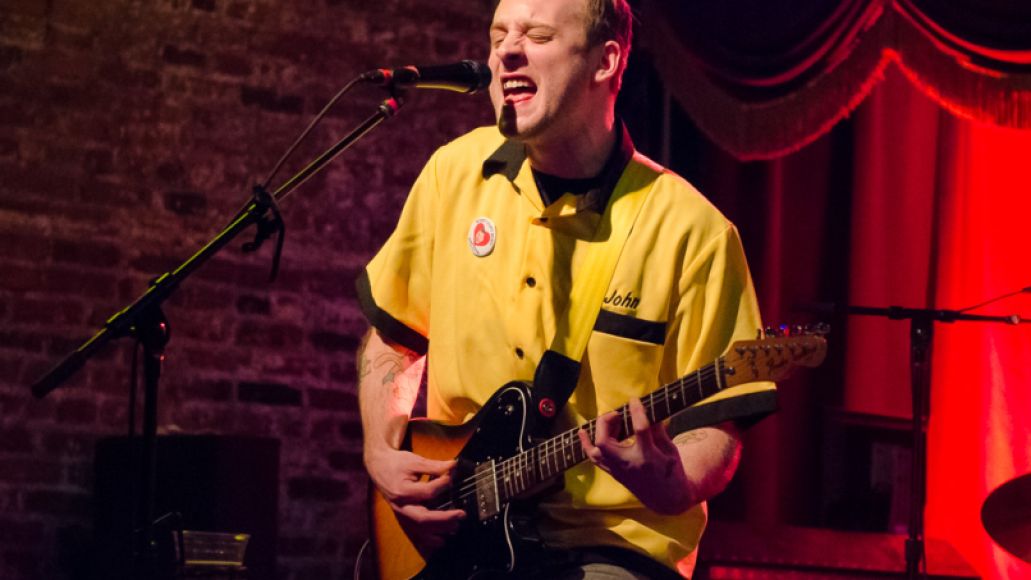 Before we get to those, how ’bout them Beatles? The band’s presentation of the classic record should go down as one of if not the finest covers experience ever. They hopped right into “I Want to Hold Your Hand”, eliciting an Ed Sullivan Show-esque reaction from the audience, replacing screaming teenaged girls with the sauced cheers of a Brooklyn crowd. The notes were heavier and louder than the soft tune had likely ever been played, a rendition that sounded like what one might expect if the Fab Four had indeed formed in the early-aughts in Providence, Rhode Island.

The same could be said for much of their interpretation of the songs, immaculately rehearsed and given that distinct barroom romp Deer Tick has grown loved for. Ian O’Neil next took lead for Paul McCartney’s “I Saw Her Standing There”, a rollicking rendition perhaps closer to the original than the previous number due to its natural rock structure. This switching of leads would continue, with McCauley playing the John Lennon role and O’Neil handling McCartney’s bits. Drummer Dennis Ryan would later affectionately tackle Ringo Starr’s quirky “I Wanna Be Your Man”, but McCauley noted that they were stuck on one thing. “Who’s gonna sing the George Harrison song?” he asked rhetorically. “So I called a friend of mine.” Out came Dawes’ Taylor Goldsmith to sing “Don’t Bother Me”. Besides having perhaps the best vocal performance of the night, Goldsmith also delivered more stage energy than you’d ever imagine Harrison having, a full-force performance that had him bouncing from foot to foot from the second he grabbed the mic to the moment he danced off stage. 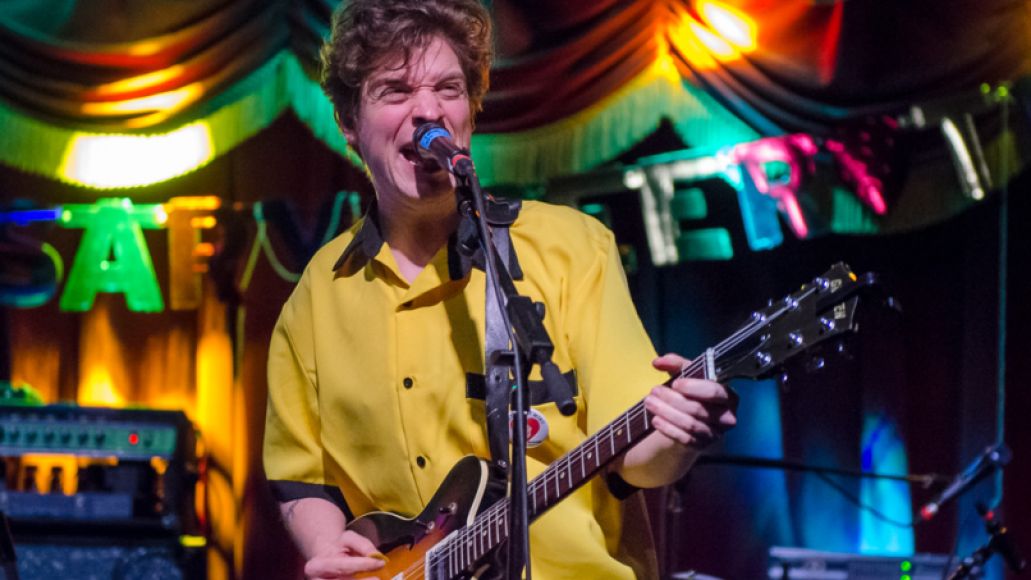 The guests were a whirlwind after that. The Felice Brothers‘ accordion player, James Felice, appeared next for “Little Child”, his familiarly large presence a bright burst that kept the crowd amped after Goldsmith’s appearance. “We opted for the accordion over the harmonica for this one,” McCauley quipped. After a perfect, lounge-y version of “Till There Was You” that saw Ryan stepping forward for some bongo slapping, the biggest guest of the night took the stage; Tommy Stinson of The Replacements came out with the name “PETE” scrawled on his bowling shirt, a nod to the famed fifth Beatle, Pete Best. He stayed for “I Wanna Be Your Man”, but it wasn’t the last we’d see of the iconic bassist.

“This is it for us Deer Ticks,” McCauley smirked before set closer “Not a Second Time”. “Then Deer Tick will be up next.” But it wasn’t the birthday boys who showed up first after the break. Instead, McCauley and Goldsmith took the stage themselves and went into “Daydreaming” from their Middle Brother supergroup project. Of course, one Brother was noticeably absent. “We really wanted Matt Vasquez [of Delta Spirit] to be here, but he’s too shy,” McCauley joked. “He’s in Norway. It’s Little Brother tonight.” The ‘Little Brother’ set went on for two more songs, “Thanks for Nothing” and “Million Dollar Bill”, with the two musicians clearly affectionate for the songs and each other as they crossed the stage to share the mic together. It hasn’t been often since the Middle Brother album’s 2011 release that the opportunity has come about to hear these songs performed by multiple Brothers, so there’s no doubt this short three-song set turned into a highlight for many. 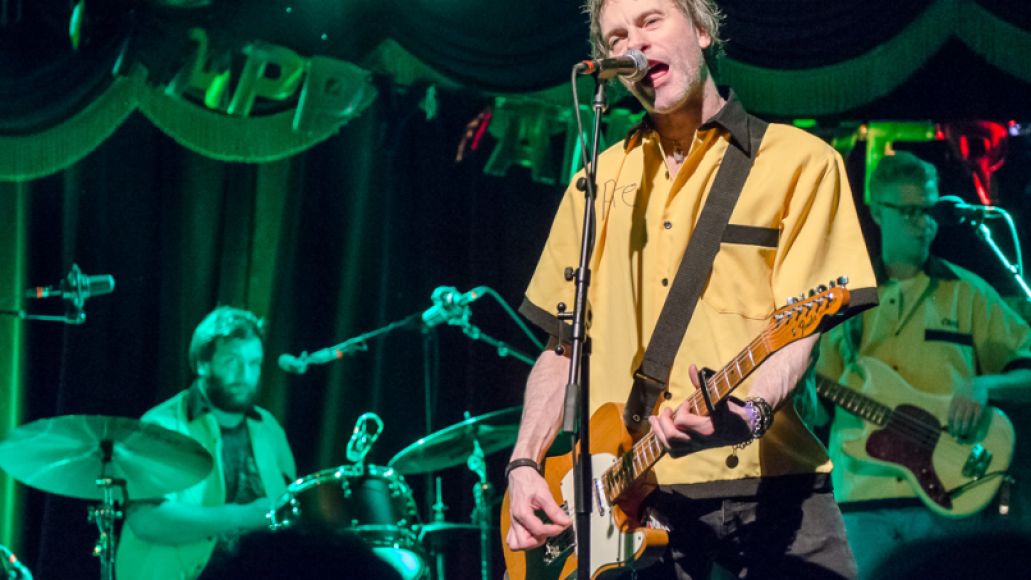 After all that, there was still time for some Deer Tick favorites. Things started with a rarity, “Hand in My Hand” off The Black Dirt Sessions, with McCauley noting that they were trying to make each set of their own material during the residency unique. They then kicked it up a considerable notch by tearing into “The Bump”, a rowdy call-back number that received full throat-scratching participation from the audience (this reporter included). From there it was rarities (“Hell on Earth”) followed by classics (“Art Isn’t Real (City of Sin)”, “Main Street”) straight through the evening. They even tossed in a few quick covers, singing a full verse of Eddie Cochran’s “Summertime Blues” before “Miss K.” and plucking a few, gentle notes of “Have Yourself a Merry Little Christmas” before their own juiced-up version of “Now It’s Your Turn”.

Yet another mini-set appeared towards the end of the evening, as Stinson returned to take lead with the Deer Tick boys as his backing band. Front and center, The Replacement scorched through his own “Moment Too Soon” before yet another cover in an evening seemingly built on them, The Who’s “The Kids Are Alright”. He stepped off stage with a thank you to the band and the crowd, but returned just one song later as the evening’s stars led the entire venue in a sing-along for their beloved closer, Lead Belly’s “Goodnight, Irene”. Stinson wasn’t alone, as everyone joined in: opener Joe Fletcher, Saturday’s opener Robert Ellis, Felice, and Goldsmith, who snuggled up to a beer pitcher-swinging McCauley and shared a friendly kiss on the lips. 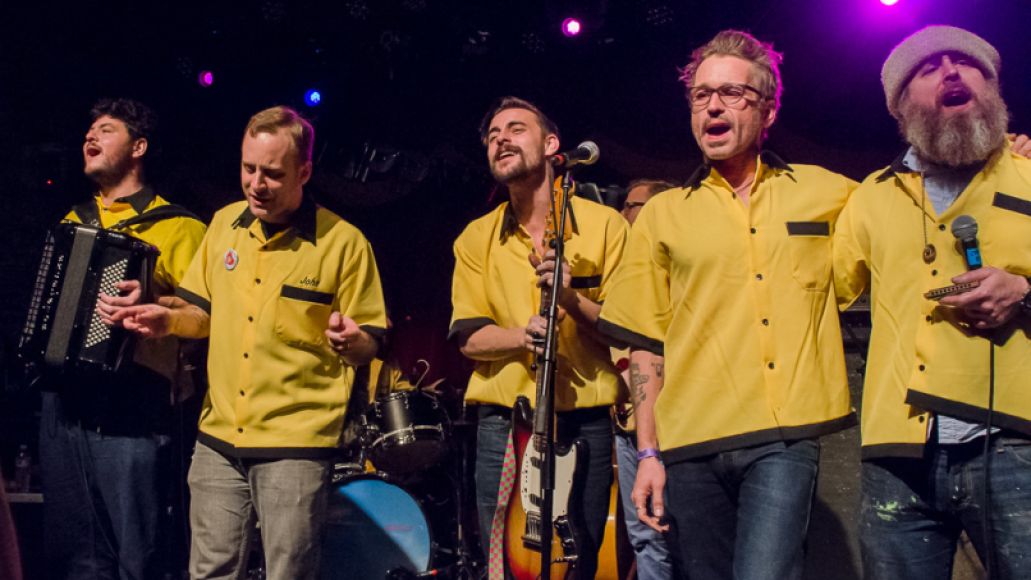 “We’ve lasted 10 years because you guys are awesome,” McCauley said before the closer. “And we aren’t about the bullshit.” I’ve tried to say similar things about the band many times over the years, but Deer Tick’s own frontman probably will always say it best. They possess a dedication to not just their own music, but music in general that goes miles towards the equally dedicated fan base they’ve built themselves over the past decade. This entire week has been in recognition of that, and the band is giving their supporters the greatest of gifts to celebrate: Truly phenomenal performances that will live in a place of revere for years to come. The best thing we can give in return is simply to sing along. 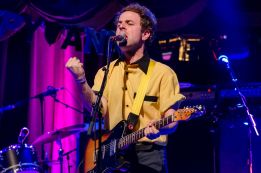 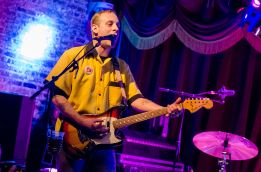 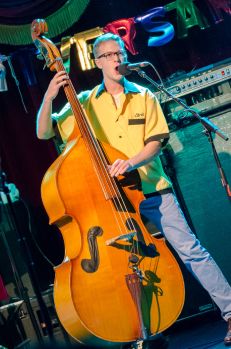 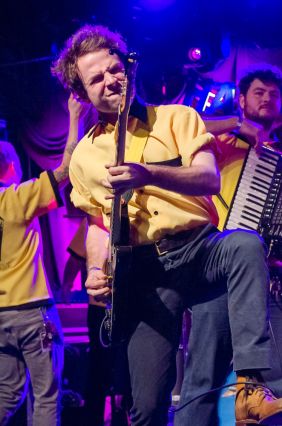 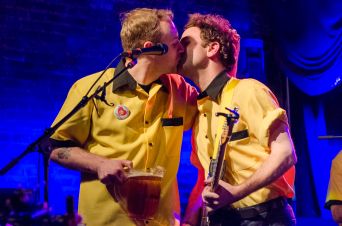 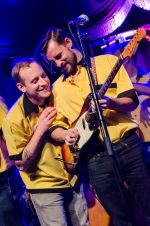 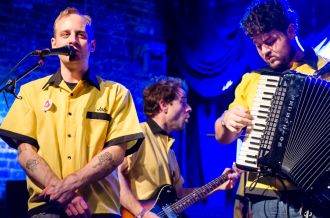