After Slowdive and many of their ilk were given the cold shoulder (to put it lightly) by the British media in their original heyday, there now seems to be something reinvigorating the shoegaze movement. “In America the meaning of [shoegaze] has never been derogatory,” Slowdive guitarist/vocalist Rachel Goswell says, the smile on her face transmitting clearly through Skype. “Whereas, in the UK, it really was, kind of, back in the day.” The genre was named, supposedly, for the artists’ propensity to play standing still, looking down at their pedal-boards, though it’d look like they were inspecting their laces. “It wasn’t a nice term, really, so it’s really nice to see that it’s been completely flipped around over the years just by people loving the music and making their own minds up.” In the last two years alone, shoegaze mainstays Medicine, Swervedriver, Ride, and Slowdive all announced their live return or their first new music in over a decade.

(Watch: A Conversation with Slowdive)

No one, though, would seem to be as surprised as Goswell: “I don’t know. It’s amazing, isn’t it? Twenty years ago, if somebody would have said to me all of this would be happening when I was in my 40s, I probably wouldn’t have believed it … it’s quite weird.” Back in 1989, Goswell and childhood friend Neil Halstead formed the band from the ashes of their last band; just two years later with the addition of bassist Nick Chaplin, guitarist Christian Savill, and drummer Simon Scott, they had released their debut LP, Just for a Day (apparently affixed with a sticker that read “like a mind-altering substance, without the risk”). They’d also already been labeled a part of “the scene that celebrates itself” by the media that favored grunge and Britpop. Despite releasing two more excellent albums (notably 1993’s sublime Souvlaki), they were dropped by Creation Records by 1995, seemingly ending their brief but brilliant career. Halstead and Goswell went on to start Mojave 3 with drummer Ian McCutcheon, but diehard fans were still clamoring for Slowdive. 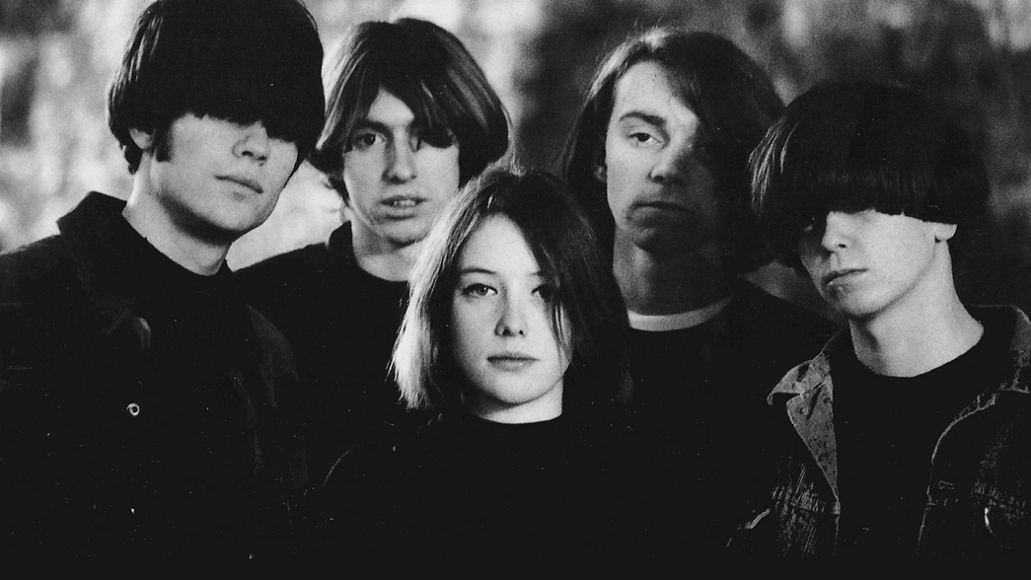 Part of the band’s breakup was related to angst and fracturing interpersonal relationships (“Bit of a testy time some of it”). But those are the sorts of things that mellow with time and experience as people grow up. “We’re just really good friends, and we just genuinely get on really well,” Goswell notes. “We’re all pretty mellow [now]. The teenage angst is gone.”

Nearly 20 years after their end, a Slowdive Twitter account appeared, followed by all of the band members tweeting out a countdown, leading to an announcement of the band’s return at the Primavera Sound festival. When asked about why they returned now and not last year or the year before, Goswell seems a bit uncertain herself: “We had been asked previously, but it was never the right time. So, you know, all of us to be available … Primavera [asking] did have something to do with it, and we’d also discussed maybe doing another record, as well … Just, the timing was all good, really, to be honest.”

Even before they hit the stage in Barcelona this summer, the positivity emanating from the community overwhelmed any potential concerns or pressures of a comeback. “[It] really did blow us away,” Goswell explains. “Online, everything went nuts really, and it was quite emotional … It’s just been a really, really lovely year, and it’s made us all feel very warm and happy.” They went into rehearsals and relearned all the old songs, putting together a bulletproof setlist that would please fans both old and new.

Just as the band faded away only to come back to prominence, so did shoegaze as a musical touchpoint. “There’s even a shoegaze pedal [now], which is so funny,” Goswell laughs as we discuss the changes in the technology and sonic fidelity so important to the genre. “‘Machine Gun’ took quite a while to get together properly with all the guitar sounds and tunings. Some of it was really challenging stuff, like ‘Slowdive’, which was the first song we played. It was a real goosebumps moment for everybody in the room when we did that.” But in the end, the vast changes in pedal and amp technology turned out to be a great opportunity. “I think our sound is much better now than it was then, actually,” Goswell chuckles. 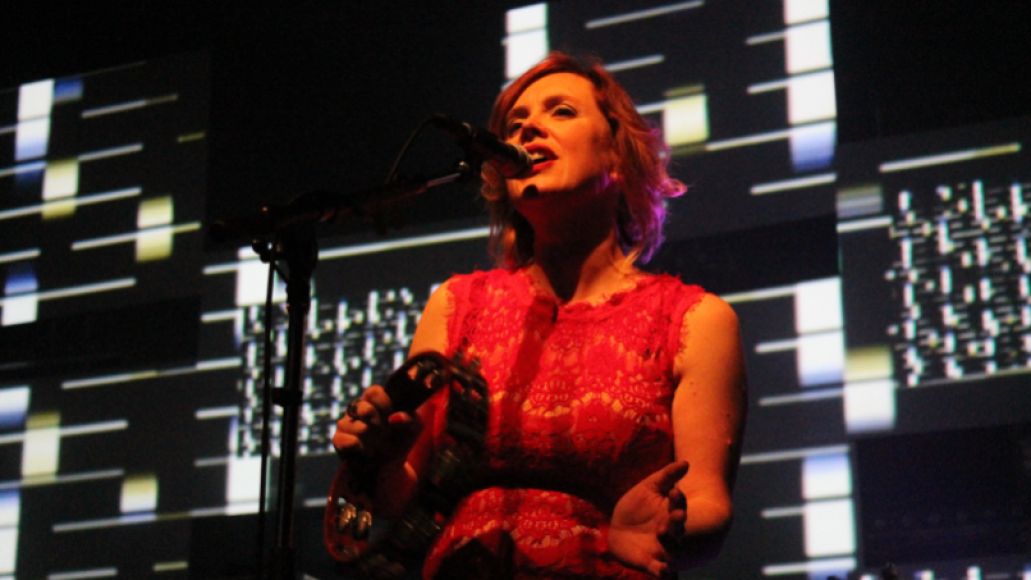 When the big day of their festival performance finally arrived, the ride continued. “There was probably about 25,000 people watching us, which is just something I wouldn’t have been able to comprehend ever happening to me,” Goswell says. “As we were waiting to go [on], we all just kind of looked at each other and were like, ‘Shit, this is ridiculous and absolutely amazing.'” The set, like the many that followed on a string of festival dates and a North American tour, was majestic, ringing out with the accumulated power of a band cut down long before its time reclaiming its legend. Their performances sound controlled, taut. But Goswell explains that there’s still some rust to shake off: “I did make a clanger in San Francisco or LA right at the end of the tour [during] ‘She Calls’ … I thought we’d done the second verse, and I got completely confused and just played the wrong chords. Neil, and he will freely admit, is prone to doing a lot of jazz notes that can be quite awful.”

But part of their masterful sound had to do with bringing in their old sound engineer from their first shows. When I laud their set at Chicago’s Pitchfork Festival (it sounded better than any noisy, multi-layered band at an outdoor festival had any right to), Goswell is quick to tip her hat: “He knows [our sound] inside out. I think it can be quite a difficult thing — outdoors, particularly — to recreate. There wasn’t any wind in Chicago that day, but if you’re in a windy place, the sound gets blown all over the place. It can be really challenging.” Simply put, the set sounded, as she noted, as good as the records and bootlegs, if not better, as if the intermediate 20 years had never passed. 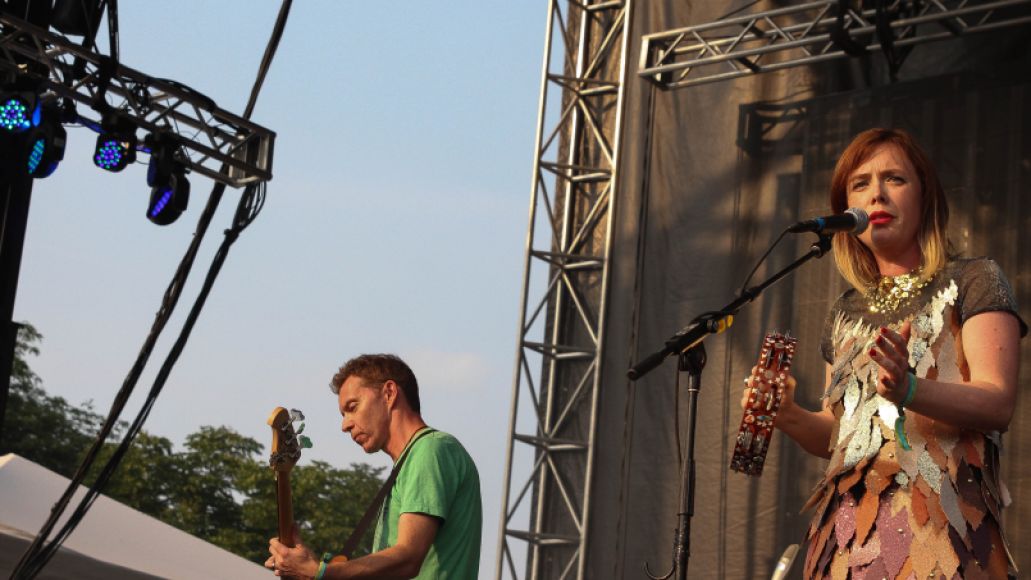 And though there were fans who hadn’t seen them in two decades, fans who hadn’t been able to attend those shows, and even fans who weren’t even born when the quintet broke up, the pressure didn’t seem to faze them. “We’ve met so many young people … I hate saying that, now,” Goswell laughs. “We couldn’t come back and just be kind of half-ass. I think we were pretty quietly confident on the musical level. Definitely pressure, but I like to think from the feedback that we had this year, we lived up to people’s expectations. Would have been really sad if there were people going, ‘God, they’re shit live.’ Hopefully we delivered. We have had a great time.”

And while other big-name reunions this year and prior have been content to tour and run primarily on nostalgia, new music has always been part of the plan for Slowdive. In fact, it seems as if it were a deal breaker in the conception of the reunion. After two final dates in London in December, the band will be “battening down the hatches to … rehearse, write, and record a new record.” Slowdive, too, isn’t the end of the reemergence of shoegaze: “I guess there’ll probably be a few bands coming back out in the next year,” Goswell says. “I am aware of another band who are going to be, but they haven’t announced it yet.” But if one band were to exemplify the newfound power of shoegaze, of that genre’s rise from insult to legend, it’d be difficult to come close to the confidence and clarity with which Slowdive have returned.

Reunion of the Year: Slowdive