Ryan Adams is a big nerd, and not just for music. The alt country songwriter appeared as a guest on Marvel.com’s “This Week in Marvel” podcast earlier this week to discuss his major obsession with comic books. During the course of the interview, Adams revealed that he’s currently working on comics of his own with the intention of releasing them alongside their own original soundtracks.

Adams is writing and drawing the books himself while on the road, and he and his new bandmates are recording the corresponding songs in their mobile recording booth. “As the comics are starting to get half way to three-quarters of the way done, they’re starting to get finished, I’m going to make soundtracks for them with these guys,” he told Marvel’s Blake Garris. “Or I’ll actually go to Daniel [Clark] or somebody will have a feeling and they’ll go, ‘Hey, can I do this one?’ and I’ll be like, ‘Absolutely. Can I add some vocals later?’ Or maybe not even; maybe Danny will do the whole thing.”

Though he’s handling all the pencil and ink work himself, he’s still searching for the right people to color the comic books in the classic style he’s looking for. “I gotta find some place that can color it with those dots, those color dots. I want it to be colored like an ’80s comic book where you could tell it was going through a press and you could see the small dots, like they made that arrangement somehow.” If he can’t find someone who can pull it off, he said he’ll release them in black and white.

Adams said drawing the comics has been a way to replenish his energy between shows, as he often gets lost in the work for hours. “It’s just a different way to roll down the road for me,” he said, adding that some of the books are funny, while others aren’t so good, but he’s confident he’s getting better as he goes along. “I’m gonna get better,” he asserted. “And then I’m gonna get great, and then I’m gonna get amazing. That’s the way it’s gonna go. Because I have all these really great ideas about how I want to do it, and I can break every rule I want.” 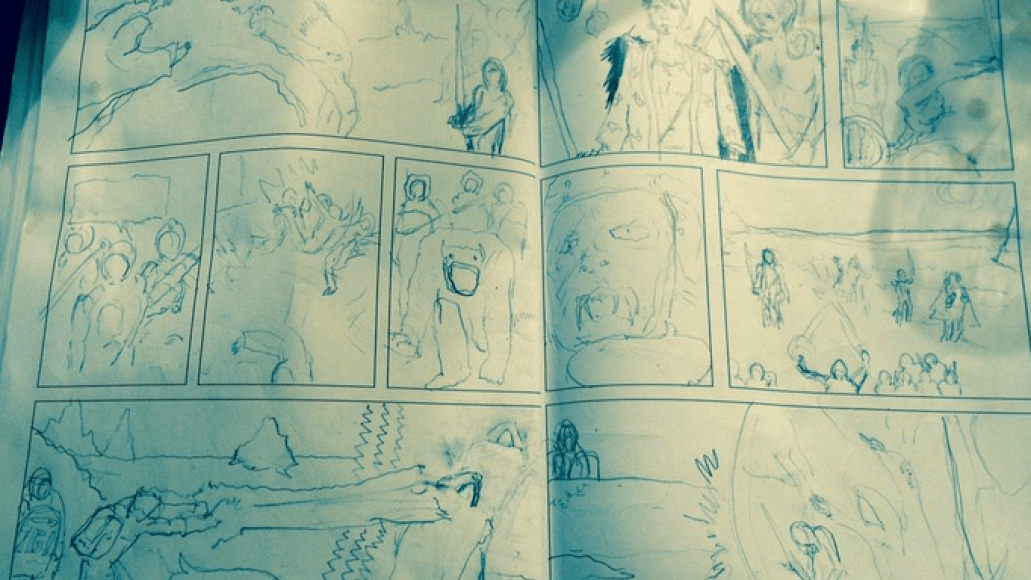 As the project is in the very early stages, there’s no word on when — or really if — we’ll be seeing Adams’ comic books. Bleeding Cool reported in November that tweets between Adams and IDW Publishing could indicate a partnership between the two. Adam’s most recent tweet about the work revealed that he’s just about done with issue #2 (see above image).

The art form’s influence on the musician, however, is apparently something we’ve already heard.  Adams said he frequently writes songs based on comics, and that there are issues strewn about every room of his studio that he’ll turn to whenever he’s stuck on a moment. You can even see comics in the interior sleeve artwork for his latest self-titled album. “On the new record it was a lot of older war comics,” he revealed. “There was some very early Patsy Walker stuff, but only because that was easy to leave around. And then some Savage Tales and things like that were making its way through.”

Elsewhere in the podcast he discusses his affinity for war comics like Our Army at War and The ‘Nam, Spider-Woman, Secret Defenders, Don Chin’s Adolescent Radioactive Black Belt Hamsters parody, and the work of cover artist Bill Sinekiewicz. He called Sinekiewicz’s work some of the “most beautiful artwork [he’s] ever seen,” specifically pointing to the cover of New Mutants #31 and an image of Peter Parker/Spider-Man and Mary Jane’s wedding he bought his wife, Mandy Moore, for their one-year anniversary. He revealed that he commissioned the artist to do an album cover in that old style, but was heartbroken to learn Sinekiewicz had turned to computers. (Sinekiewicz did do a piece for Adams, but it unfortunately didn’t come through in time.) In a lengthy diatribe, Adams bemoaned the prevalence of technology in modern art and music:

This is what I have to say, because I thought about coming here and not sounding like an old person. But ya know what, I’m not an old person. I’m an idealist. And we’re forever young. My dreams cannot be tainted by this world and its monetary system of dreams and that crusher that rolls over them all. But this is what I want to say. And Stan Lee’s not gonna listen to this. No one here’s gonna listen to this and they’re not gonna care what I’m saying, but I’m gonna say it anyway. There’s a lot of kids out there that read Marvel Comics, and they’re looking at these comics. And every time that someone makes a decision to take it away from a penciler and an inker and a colorist and you put it into a computer, you’re teaching a kid that he’s not good enough…

It doesn’t mean that you’re going to stop using computers, and it doesn’t mean that computers are bad because we’re talking into a computer right now and you’re listening to it on a computer. But there’s this human element that’s getting erased and some of it with music more than people realize, more and more. And I think with comics too. What I think is interesting is no one’s been able to actually look at the increase in your digital use of your world and look at the decrease of the sales of art, not only of music but of comic books, of film, of regular modern art. I mean, it’s all moving farther and farther away from popular culture and people aren’t questing for it as much.”

There’s plenty of more fascinating tidbits in the interview, so listen to the whole 33:41 thing here.

Ryan Adams is writing, drawing and soundtracking his own comic books