Over the summer, we wrote about data analyst Matt Daniels’ scientifically deduced research in discovering which rapper has the largest vocabulary. (Spoiler: It’s Aesop Rock.) Now, a statistics nut by the name of Brian Chesley has taken Daniels’ original concept and explored a different genre: rock ‘n’ roll.

Now, to be honest, Chesley’s data isn’t as solid as Daniels. The sample size is minute in comparison — Daniels recently examined another 20 new rappers, bringing his total to 105; Chesley, meanwhile, only looks at 10 rockers (What, no Bruce?). Also, instead of using Daniels’ lyrical benchmark of 35,000 words, Chesley kept his data to 17,000 words, “because I couldn’t get more lyrics for Led Zeppelin – they only have [approximately] 70 short songs on A-Z lyrics.” (Daniels’ method would have meant Zep wouldn’t be counted at all.)

All the guts aside, Chesley charted the data with average words per song on the Y-axis and number of unique words on the X. What’s immediately apparent is that most rockers average about 210 words per song with 2,000 unique words over all; The Eagles, The Rolling Stones, Aerosmith, U2, and Led Zeppelin all cluster together in that area, with AC/DC and Metallica being slight outliers in either direction.

The more shocking statistics come with the unique outliers. First up is KISS, who have been making music since 1974 but have apparently gotten away with using fewer than 1,400 words. Chesley pointed out that common theory is you should know about 2,000 words to converse at a basic level, but KISS’ conservative vocabulary shouldn’t be too surprising. “This makes sense to some degree – Kiss has a heavy metal style that focuses on instrumentals and raw energy.” In other words, words don’t matter when music rocks hard!

On the other end of the spectrum you’ve got Pink Floyd. Such great portions of their songs are grooves and jams, but they never skimped on the dark lyricism. Even though they only used about 135 words per song, they used over 2,600 different ones. That gives them the largest vocabulary of the bands Chesley looked at by almost 400.

Curious about where the rockers would stack against the rappers, Chesley had to extrapulate his data, as you can see below with Metallica. The results put the heavy metal icons in the 10th percentile just behind Drake, while Pink Floyd settles somewhere ahead of T.I. in the 25% range. Chesley wraps up his article with a conclusion we all always knew to be true, but now have the statistics to back it up: “Key take away – classic rock artists generally do not use a robust vocabulary in their lyrics; they instead rely on awesome instrumentals, vocals, and energy.” 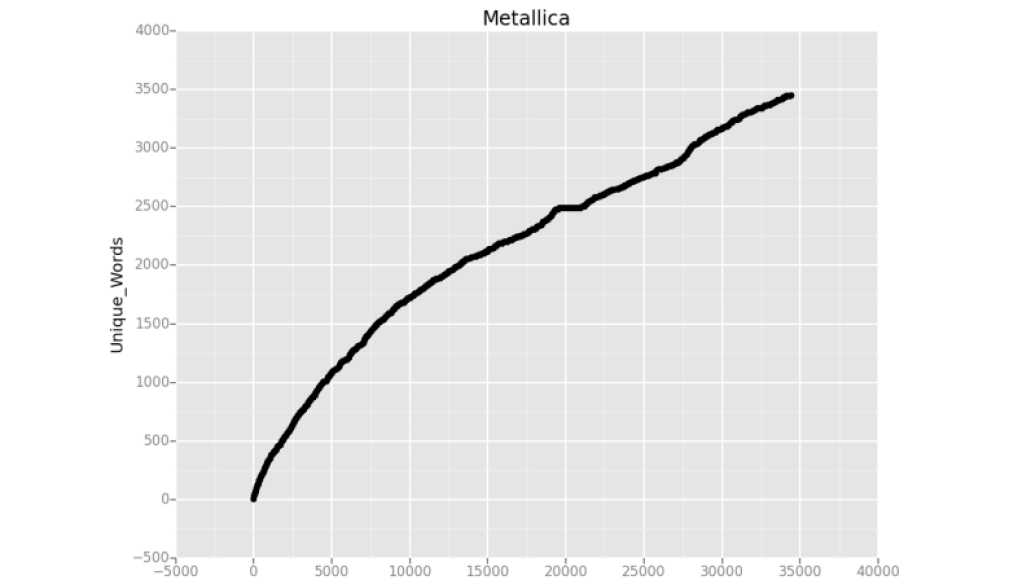 These rock bands have the biggest vocabularies