There is a part of you that feels like it’s dying when the person you wrapped yourself around leaves your life. It is like an amputation. Left attached, the dead thing would have killed you. Severed, the loss gapes enormous. There is no limb left, but the limb hurts. There’s no one left to scream at but yourself. With her ninth album, Vulnicura, Björk traces the fronds of that phantom pain. She had a partner, and now she doesn’t. She is otherless. The album’s title is an abstraction that hides a bounty of words: vulnerable, volcanic. Cure.

On Vulnicura, Björk invites you to glide as a ghost through her sadness. You can haunt her for an hour, floating disembodied through ruins too raw to describe with pretty words. There are no more emotional landscapes in this world, no sweeping cliffs or northern lights. There is only a woman, her child, and the partner who one day stopped loving her.

Sometimes, there is a moment when love has evaporated and the lover lingers. There is a body there, and you can touch it if you want. You can read a history of skin in the person who still sleeps next to you, as Björk does in the song “History of Touches”. It is Vulnicura’s shortest song and its densest. In it, she lodges every moment she ever spent touching her partner, a boundless intimacy wrapped into three minutes.

The body stays behind while the love it used to hold moves on. The worst part is not being able to explain where it goes. What turns a heart into a stone? How do you lose someone who lives with you in your home? “I wish to synchronize our feelings,” Björk sings on “Stonemilker”. “Find our mutual coordinates.” Her language comes out clinical even as sorrow frays her voice. If I could just make this into a science, I could find what went wrong.

There isn’t any science here. The worst part is how the line between with and gone can never be found.

When Björk recorded strings for Homogenic at the end of the 20th century, she found fertile tension between lush orchestral sounds and brittle electronics. She pitted the two against one another, creating a violent and gushing production. In the 15 years since Homogenic’s release, that contrast has grown less stark. Last year, Arca made strings an ally to his machines; here, as Björk’s protégé, he helps to erase the seams that once marked her work. Vulnicura is smooth and whole, even as its singer lies shattered.

The strings, the beats, the voice — no deep lines can be drawn on this album. It is a monolith. It moves through time from the first withdrawal of affection to the stubborn hope that a lover’s coldness could be temporary — “maybe he will come out of this loving me” — to the severance, the break, the agonizing 10-minute “Black Lake”. And then Björk does something extraordinary. She takes her brokenness, and she loves it. She finds strength in it. She grows new shapes from the cracks.

Many are guided by a myth that the right kind of love — the pure kind — is permanent. Find the right one, and you’ll never have to worry about looking for love again. And maybe Björk believed that once, even though she had dispelled thoughts of herself as a lifelong mate with Homogenic’s “Hunter”. Maybe the past years with her partner had instilled in her new faith in a love that lasts.

Because sometimes it does last — mutates, maybe, but lasts. Or it seems to, from the outside. You see the couples who die together in their 90s and you think all the stories about soulmates must be true. But Vulnicura unravels the fiction of immutable love. Companionship is not a box to check off on life’s long list. Love is something that happens, and it happens differently every time.

By the end of the album, Björk loves her wound. Her hurt, her heart, and her womb collapse into the same organ — not a vacancy, but a bleeding muscle. While she studied the mechanics of the whole universe on 2011’s Biophilia, here she trains her lens on her own atoms. Her cells die, and new ones are born. “If I regret us, I’m denying my soul to grow/ Don’t remove my pain/ It is my chance to heal,” she sings on “Not Get”. “After our love ended, your spirit entered me/ Now we are the guardians/ Keep her safe from death.”

The “her” is Björk’s daughter, a child born from love that has now ended. “In love we are immortal, eternal, and safe from death.” The love vanished, but the immortality it granted, it seems, didn’t. It existed, once. It will always have happened. That’s enough.

When Antony Hegarty sings with Björk on “Atom Dance”, a 5/8 suite where the storm clouds begin to lift, that “her” grows broader. “I am fine-tuning my soul to the universal wavelength,” Björk sings against the shifting strings. “I am dancing to our transformation.” The pain she feels is hers alone, no one else’s. But her healing is a dance whose steps everyone learns.

You can see it in her face on the cover. She’s nearly cleft in two, a bloody slit glistening in her chest. But from her head, alien flowers bloom down her lacquered body. She holds her hands out, and her fingertips sprout. She is broken and whole, whole and broken. She heals, and in healing, she spreads her love. Björk has reached further than ever.

Pick up a copy of Vulnicura here… 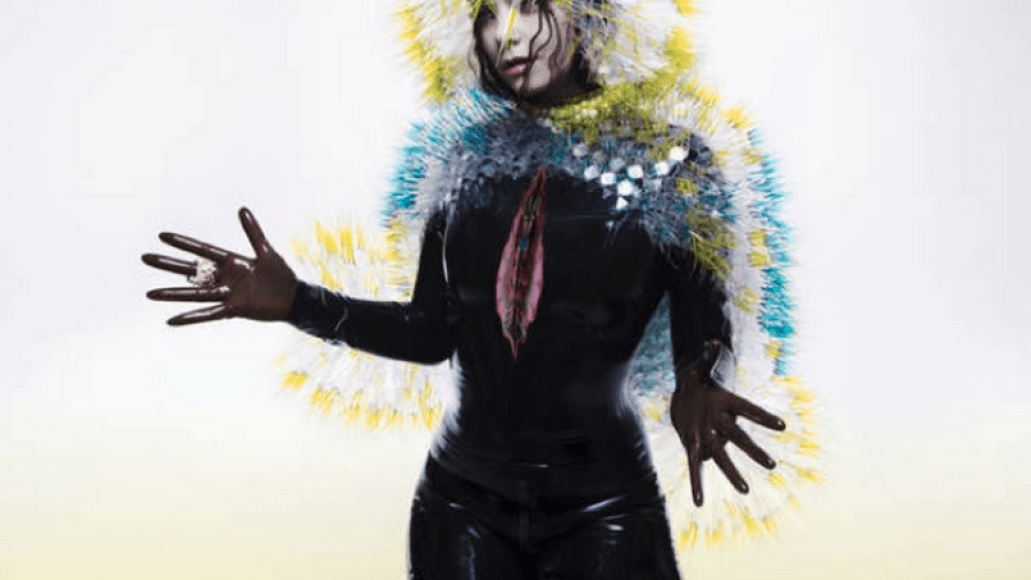 Björk Heals and Spreads Her Love on Vulnicura: Review