Currently bed-ridden and recovering from a bike accident that has left him incapacitated with several significant injuries, U2 frontman Bono spent the last few weeks of 2014 writing a massive year-end retrospective containing his thoughts on everything from the controversial release of Songs of Innocence to Jimmy Fallon to Kanye West.

Among the biggest takeaway however is the revelation that Bono may never be able to play guitar again. “Recovery has been more difficult than I thought,” he explained. “As I write this, it is not clear that I will ever play guitar again.”

November’s “high energy bicycle accident” left Bono with a “facial fracture involving the orbit of his eye,” three separate fractures of his left shoulder blade, and a fracture of his left humerus bone in his upper arm, which broke in six different places and tore through his skin.

“The consequences of this freak accident are significant enough that I will have to concentrate hard to be ready for the U2 tour in fitness terms,” he wrote. “As a result I have cancelled every public appearance and decided this missive is all the communication I can manage for the first half of 2015, beyond muttering and singing to myself of course.”

However, Bono remains in good spirits. Regarding the bleak future of his guitar playing, Bono quipped, “my bandmates likely won’t be too bothered by this development … The band have reminded me that neither they nor Western civilization are depending on this.”

You can read his entire missive at U2’s website. Below, see an X-ray of Bono’s broken arm. 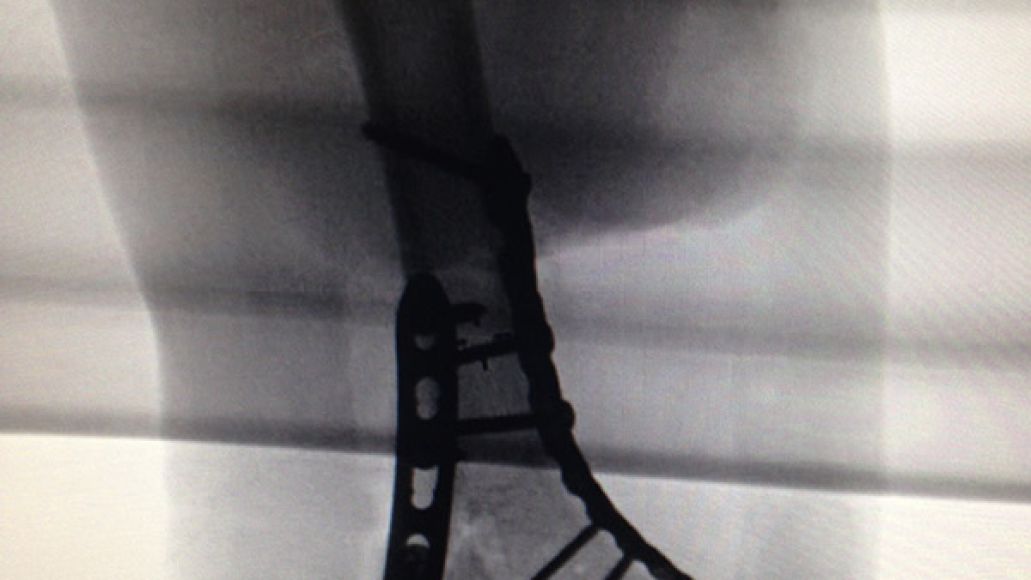 Injuries may prevent Bono from ever playing guitar again