Saint Vitus Bar isn’t the easiest place to spot if you’ve never been there. It’s at the end of Manhattan Avenue in Greenpoint where there’s nothing much around besides the ubiquitous bodega or two. The only thing marking the black door is a small sticker with the bar’s logo and name above the metal push panel. Next door is an apartment entrance with a sign that reads “Private residence, please do not block this door.” It’s a dark, small spot that welcomes those whose wardrobe largely consists of black fabrics. It’s probably the best spot Savages could have chosen to test out their new material.

The British four-piece took up a lot of headline space in 2013, but if you look back at their coverage since then, there hasn’t been much of note since their appearance on all those year-end lists. After concluding their tour last year, they holed up for six months in their hometown of London to set about working on new material. It’s just the course of action you’d expect from a band that quickly gained a reputation for being serious, music-focused workers. There was no riding the waves of success through numerous concert appearances; there was a concerted effort to get back to business and make it count. 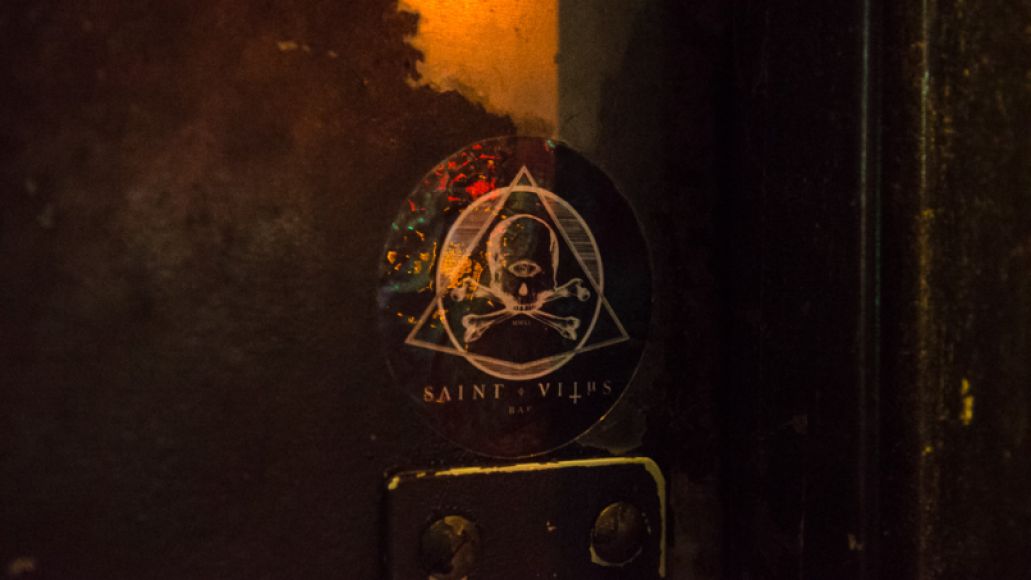 New York City was pegged as the testing grounds for these fresh works, and Saturday evening was the third show in a nine-date stretch. These shows are the first chance the new songs have at coming to life. If this particular gig acts as any indication, the material breathes just fine, sturdy and lively with thick blood. Those six months away were far from squandered, and to premiere the results of those sessions in such intimate settings (Baby’s All Right and Mercury Lounge were the other venues) put the focus on the work, just another indication of where this band’s mindset is.

The new material came out kicking and screaming, with the first trio of songs being new numbers. “I Need Something New” was almost a cheeky choice for opener, the title of course fitting the theme of the evening. That song, along with the subsequent two, “The Answer” and “No”, demonstrated the women of Savages broadening their sounds ever so gracefully, something careful listening would reveal throughout the set. While much of Silence Yourself was like taking deep, stern breaths, these tracks exhaled wider. Even as Jehnny Beth squawked out the final syllable of the chorus, “I asked the world, and the world said ‘No!'” — the type of heavy lyricism we’ve come to expect from her — the band ramped up in ways that felt lighter than past material. 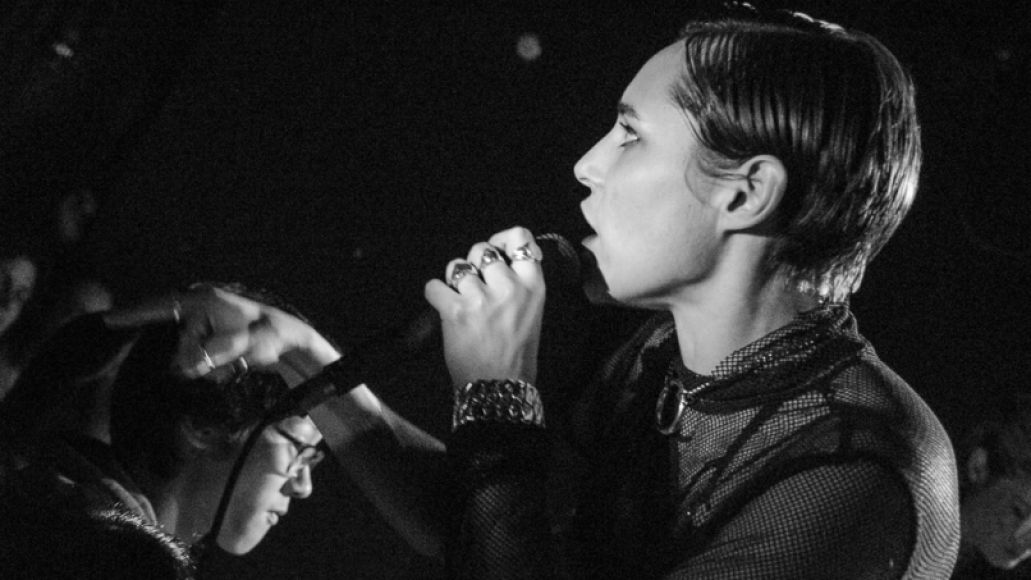 You could feel that blend of light and dark again in tracks like “Adore”. As Beth insisted, “I know evil when I see it/ I know good and I just do it,” the band produced a chilly wind of a song, all wisps and reverb. But underneath it lay a distinct current of ’60s pop music pulled through Gemma Thompson’s guitar. Even the speed punk fury of “This Is What You Get”, a clear standout among the raw material like a hail of bullets in a tornado, had a dash of something — hip-hop? — swirling around in the delivery. It also saw Beth taking a different glance at love and lovemaking than she did on the band’s debut. The song doesn’t revel in the liberating femininity of kink; it wallows in the disgrace of failed romance: “This is what you get when you mess with love.”

Don’t take those genre references too strictly; these ladies are still very much playing in the post-punk playground, but they’re not locking themselves into rigid interpretations of it. Squealing spirals of distortion and leaden steps of low end aren’t the only way to explore the depths of the style, after all. At the same time, perking up the sound here and there doesn’t diminish the ferocity of it, either. 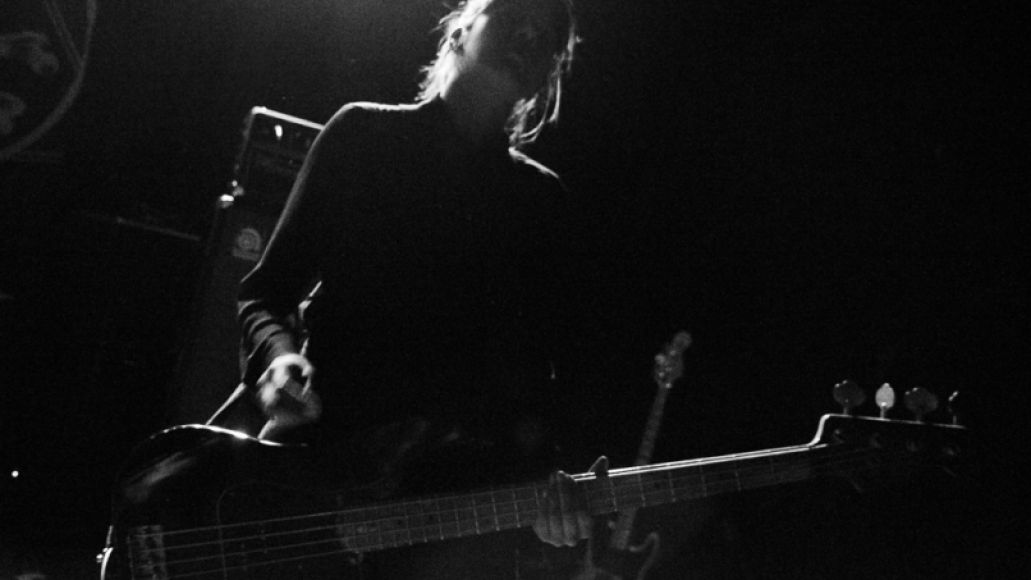 Other songs making their debut, like “Surrender” and an untitled number midway through the setlist, were more akin to the haunting sounds of Silence Yourself. Still, it all felt like it belonged together up on that tiny stage with the London band giving it their all. Ayse Hassan was the show-stealer for me, as bass is such an integral part of Savages’ trudge. She was lost in her work the entire time, a shell of a body that moved in time with the sounds around her. Fay Milton, on the other hand, was a more outward performer, raising her sticks in perfect rock drummer fashion before each symbol crash in the chorus to “Shut Up”. 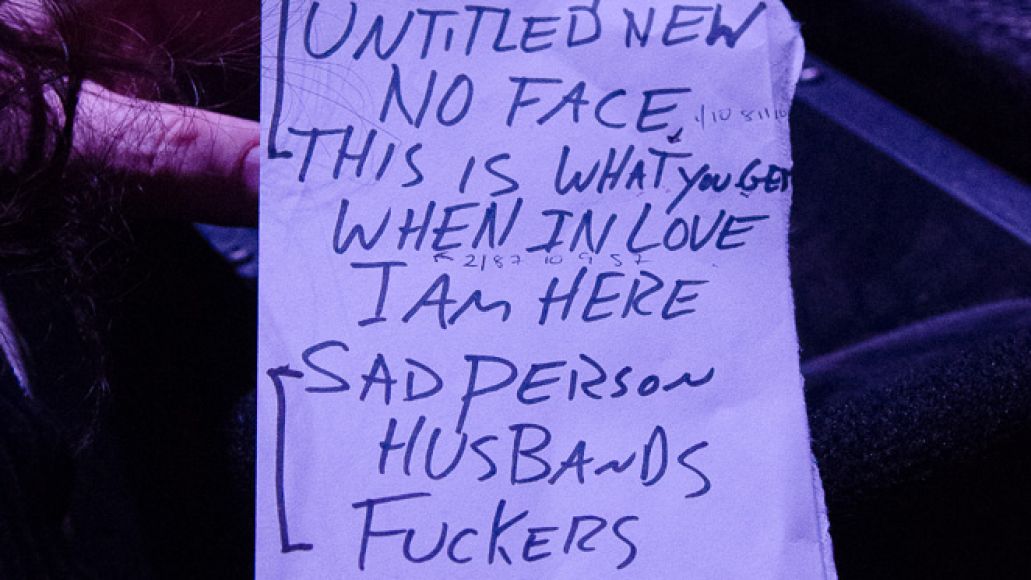 Of course, that all might have only been noticeable from my vantage point right against the low stage. What little light hit the stage came from behind, leaving the band as little more than swaying and jolting outlines. Beth remarked that she couldn’t really see the audience beyond the first few rows, which led to a man in back calling out, “We can’t see you very much either!” “Yeah, I know,” Beth retorted. “That’s intentional. Can you hear us, though? Is it loud?”

As always, Savages were about the music. It’s why Beth would gently reach out to lower people’s cameras or phones if they got in her face. It’s why she refused to get trapped behind a mic stand, finding those in the crowd most engaged with the music and engaging them right back with eye contact and pointed fingers. It’s why even with all those new, looser sounds, the new material played so well against the old. 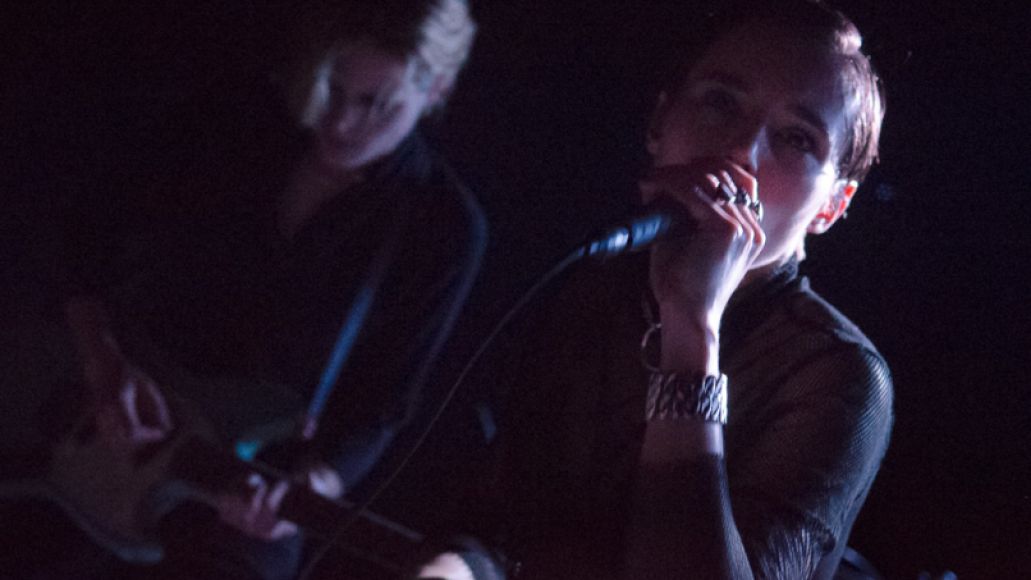 That’s what made Saint Vitus such a great location for the band on this particular city residence. Savages’ music has always been crafted to be played live, and these small venues are where they have the best chance to thrive. That said, those who placed Silence Yourself on their 2013 Top Albums list have likely already reserved space on this year’s chart for the sequel. With songs that continue to exhibit an adroit awareness of the past and a weary yet liberated eye towards the present, it sounds like that space won’t be wasted.