College me would have loved watching The Sidekicks and Cayetana Friday evening at Baby’s All Right. That’s not to say that post-college me didn’t have a great time (he in fact did), but pressed up against the low stage in that small, hot room with those loud pop punk bands being backed by a contingent of strained-throated diehards brought out a sense of nostalgia. I miss shows like this.

Ever since I discovered and fell in love with the experience of a music festival, my time inside venues has decreased considerably. Sure, I’ll hit up a Bowery Ballroom here or a Music Hall of Williamsburg there, but it’s not often I find myself in an Arlene’s Grocery or Baby’s All Right. (My New Year’s resolution just so happens to be to do more of both.) Back before my first Bonnaroo, my college buddies and I would head out on weekends to venues all over Long Island and the city to catch bands with small but dedicated fan bases. When I lived back home in Boston, I remember walking up to a pre-renovation Paradise Rock Club or a pre-Brighton Music Hall Harper’s Ferry day of show and grabbing a ticket for some touring, screaming pop punk act. It’s easy to get sentimental about those days, so it was a sweet pleasure to feel something similar Friday night. 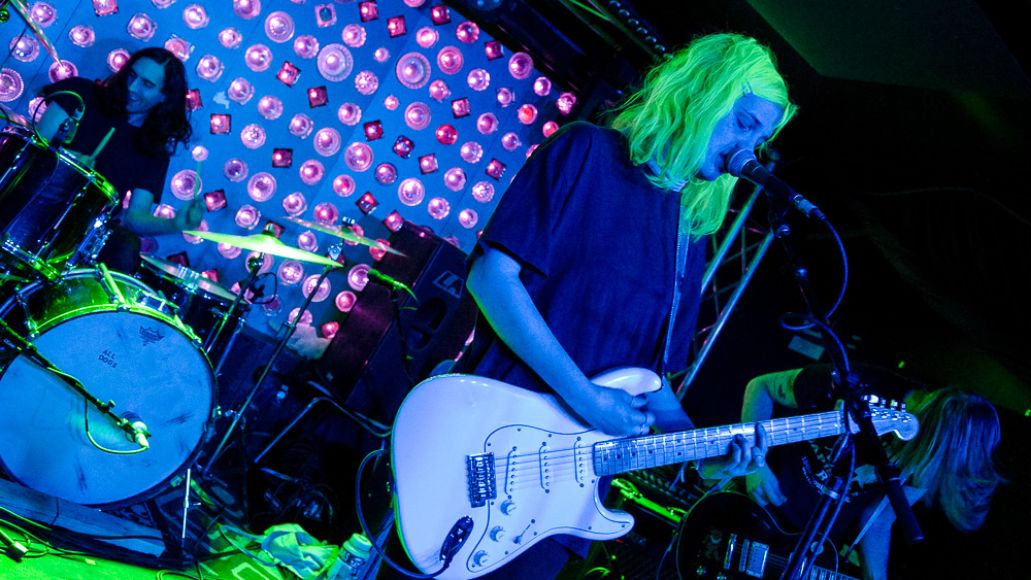 I entered to a cover of Neutral Milk Hotel’s “Gardenhead/Leave Me Alone” from first openers Roger Harvey & the Wild Life. It wasn’t what one might expect from a pop punk show, but the trio delivered a completely admirable (I actually wrote “rad” in my notebook) versions with just bass, drums, and guitar. It was sort of funny that they brought out a trumpet player for their next song and didn’t try to get that muted horn sound from NMH’s original, but a solid rendition none-the-less. Next came All Dogs, a band that built its live show around lead singer Maryn Jones and guitarist Nick’s energy. Though their music wouldn’t have me rushing for the merch table, their show was solid, and their DIY style had clearly connected with fans in the crowd. Still, they reminded me of those “Who’s that?” openers from those Long Island bar shows, the kind that made you grin at the joy they brought their fans as much as the band itself.

In all honesty, I was there for the penultimate act, Cayetana. Their debut LP Nervous Like Me had surprised me and ended up containing some of my favorite tracks of 2014, so I was excited to see what they could do live. What their performance lacked in stage-engulfing energy they more than made up for in palpable spirit. They came off as incredibly down to Earth individuals who just happen to play some killer tunes. You could sense it before they even started playing, as bassist Allegra Anka and singer/guitarist Augusta Koch made a point of greeting a shy-seeming fan who stood dead center at the front. They’d clearly recognized him from past shows, and appeared touched that he continued to show up in support of the Philly trio. 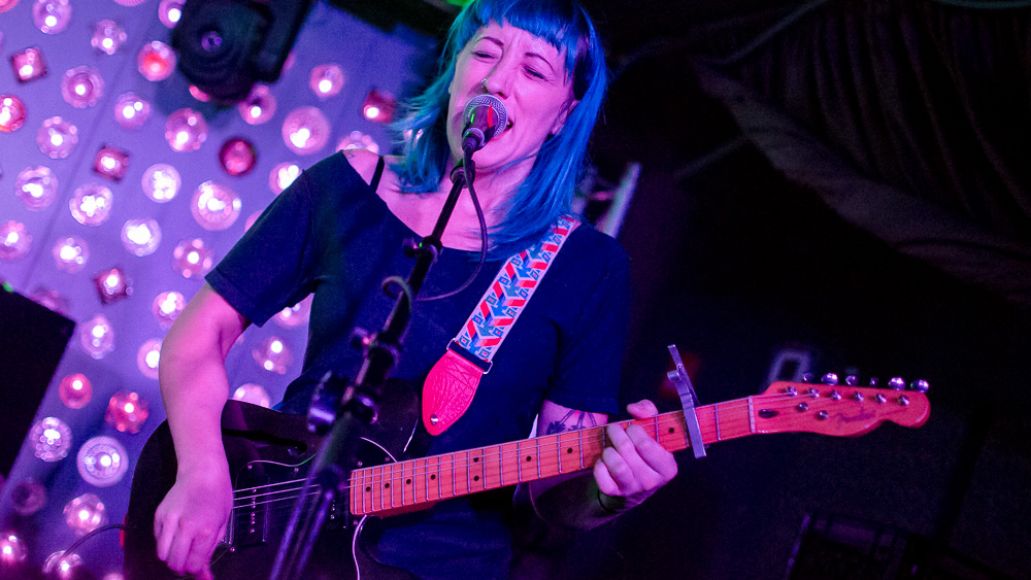 Koch beamed throughout the set, finding personal joy in hitting those scratchy squeaks of hers. Her banter was silly and simple, like a girl slightly unsure of herself trying to make new friends. Between songs, she breathlessly quipped about the new $20, too-tight H&M pants she was wearing. “So if I explode, just keep playing,” she joked, to which drummer Kelly Olsen responded heartily, “Okay, I will.” Olsen brought the most eye-catching presence to their show, biting her tongue and swishing her hair around as a smile that mirrored Koch’s spread across her face. For her part, Anka kept it all business, head down over her bass as she rocked forward and back to her rhythms. But even she wasn’t afraid to smile as I caught her eye in the crowd during the headliners set.

If there was one letdown of the set, it was that the songs seemed truncated. Tracks like album opener “Serious Things Are Stupid” (noted on the setlist as “Come Alone”) and “Black Hills” felt shorter than their recorded version, though it’s not like I had a stopwatch handy to time them. Even so, set closer “Scott Get the Van, I’m Moving” (called “Fast One” on the setlist) and cuts like “Hot Dad Calendar” captured all the wonderfully nervous energy of the record. All along, they carried a sweetness with them that would’ve made any detractor simply want to like them. How could you not just love a band that dedicates a cover of New Order’s “Age of Consent” to the recently engaged sister of their drummer? Especially when the lead singer is self-deprecatingly confident enough to admit she had to print out the lyrics. “Yeah, I printed out the lyrics,” she said proudly. “Yeah, I got a printer for Christmas.” As for Camie, the target of the dedication, she had to look up the entire song (yes, Camie, I was right next to you, and I saw you trying to use Shazam). 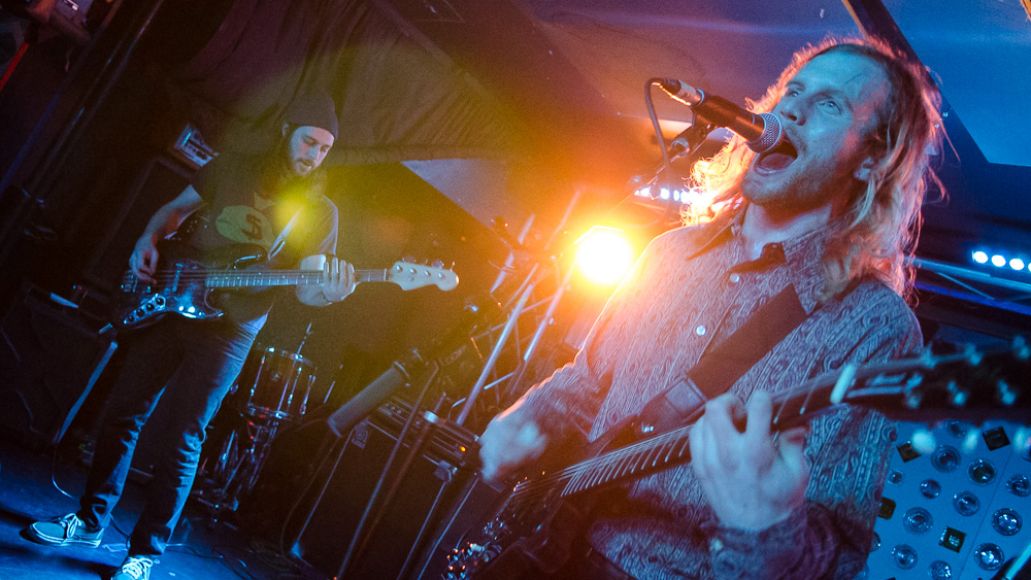 While it was clear that Cayetana is working with something special — an appreciation for the job that makes it impossible to imagine them ever becoming big-headed rock stars — The Sidekicks are obviously already special to a lot of folks. I admit to not being thoroughly versed in the Columbus outfit’s repertoire, though I did my due diligence in the week preceding the concert. But it’s pretty safe to say I was largely alone in that category, and it was the crowd’s response to the pop punk group’s performance that sold me on the whole evening.

They opened with “Hell Is Warm”, the lead track from their new record, Runners in the Nerved World. Though the album had only been out for three days, the band’s fans were all-in on the song from the second the drums dropped in at about the 50-second mark. The crowd was shoving, jumping, (but never in an overly aggressive, pain-in-the-ass kind of way) and calling out lyrics instantly. Same goes for the second track, another new one called “Everything in Twos”, both easy highlights from the new effort, and clear crowd-pleasers. 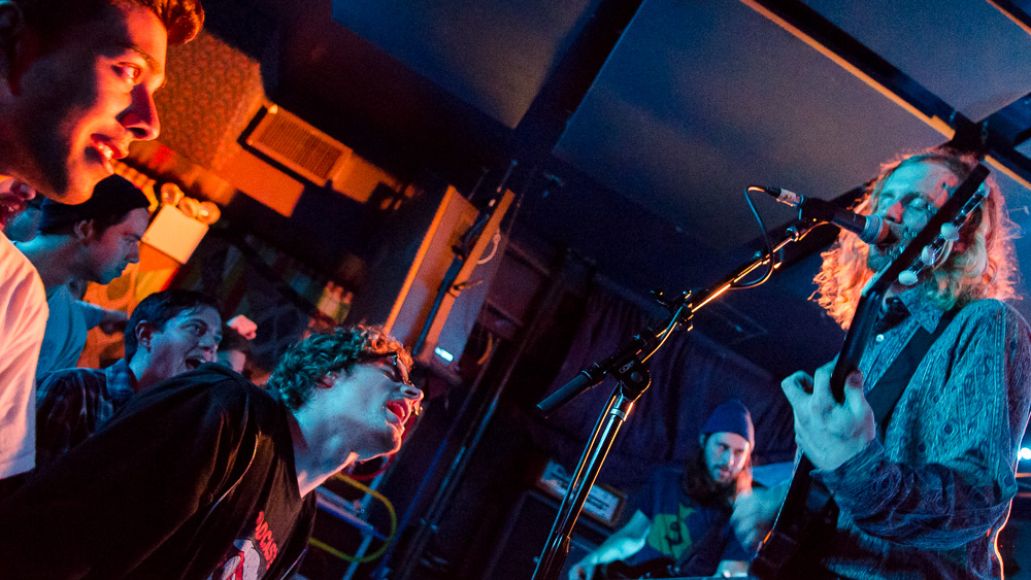 That’s the sort of stuff that pulled forth those wistful feelings. A crowd of rowdy, young, dumb superfans, sweating even more than the band themselves as they thrashed about and sang their little voices out as if they were part of the band. I swear one guy up front seemed like he was constantly reaching for Steve Ciolek’s microphone. The sort of rabid fan-buddies that tackle/strangle-hug each other and even strangers when they hear the first chords of that song or when it comes time to belt out that bridge (in this case, it was “Day-Staring” for the former and “1940’s Fighter Jet” for the latter).

And of course there’s the guitarist who doesn’t understand or care that he’s not the frontman, singing along to every lyric even when he’s not providing backing vocals. It’s the kind of show that makes the opening acts want to come out and be part of the crowd, as Cayetana did for the first half before going off to hang with locals at the bar/restaurant section of the venue, and All Dogs did for the whole show. The fact that All Dogs’ Jones was there shaking her head and screaming along the entire time is even more telling of the type of joy The Sidekicks bring when you consider she’s actually in a band with Ciolek, Saintseneca; it’s not like she doesn’t hear these songs live all the time. 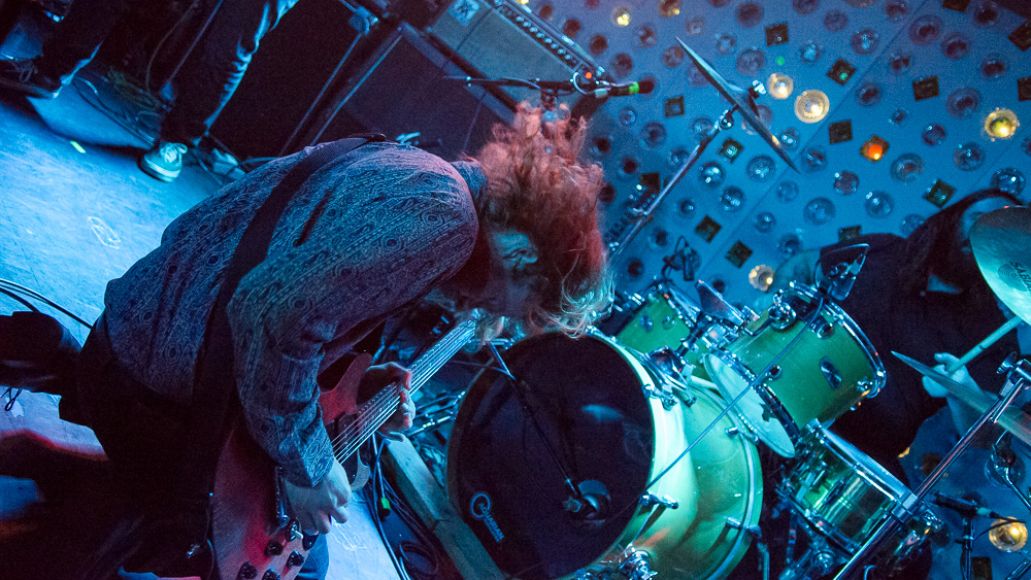 Despite the fact that the set focused heavily on their new material, the long-term followers were overtaken by every note of every song. They even had them when the set dragged as they played a handful of slower, weaker songs from Nerved World like “Deer” and “Summer Brings You Closer to Satan”. Maybe it’s because I don’t go to a lot of pop punk shows anymore that I haven’t experienced this kind of fervent, emotional, hyper-comradery response in so long. But if this is the state of the genre as it stands today, it might be time for me to get back into the type of music and shows that set me on this path in the first place. Maybe with Cayetana there’s a chance to get in on the ground floor, because those ladies have a chemistry and a style that could seriously take them places. Perhaps one day to a place where fans fall over themselves to be part of something like with The Sidekicks. 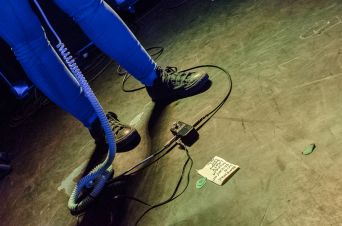 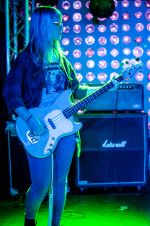 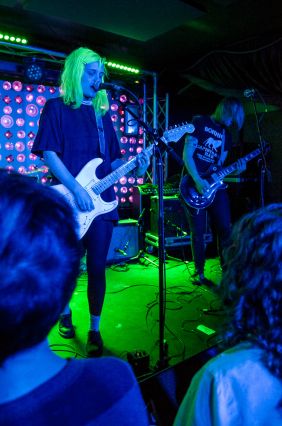 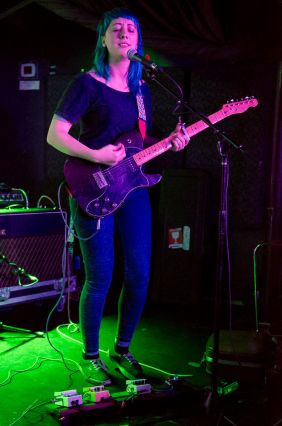 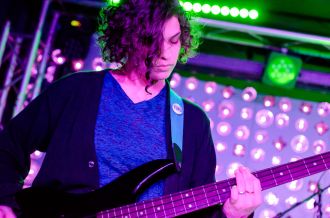 Live Review: The Sidekicks, Cayetana at Brooklyn's Baby's All Right (1/23)