Even if you don’t attend any of the major summer music festivals, the recently revealed lineups of Coachella, Bonnaroo, and Governors Ball offer a jumping-off point for the exploration of 2015’s musical trends. With just a name and a poster placement to go off of, fans around the world will take to whatever streaming service they prefer to check out the likes of Sturgill Simpson, Matthew Koma, ASTR, and Bleachers, because no one wants to be the next fool chatting about an indie band on Jimmy Kimmel that doesn’t actually exist.

It’s this process, and the hysteria that comes with EDM in the massive festival setting, that has fueled the scene’s growth since Bonnaroo introduced the one-off Luna Stage in 2010 and Coachella began packing its Sahara tent with the most coveted talent from America’s club land around that same year. Sure, not everyone lured to the fests by Ratatat or Alabama Shakes or AC/DC will be able to stand the future-bass of Australia’s Flume for more than a few moments, but even if a small percentage do, they’ll continue to breathe fresh air into the EDM bubble. For a genre still earning its credibility in the popular conversation, these festival spots, no matter how early in the day or how small the stage, are key to sustainability.

With the likes of John Frusciante now releasing acid house, a greater industry respect is approaching. But it’s not like fans or artists are awaiting this approval, the beat and the house march only intensifies. This energy has now made it to the Super Bowl festivities, where The Chainsmokers will be bringing their clever “#SELFIE” sense of humor to Glendale’s Westgate WaterDance Plaza on Thursday, January 29th in anticipation of the big game. The Drop normally stays focused on the underground, but this month we examine the rise of The Chainsmokers and the support team that brought them from the smallest stage at Ultra in March of 2014 toward the upper echelons of EDM less than 10 months later.  To compliment the big-room sound of The Chainsmokers, this volume also includes some 2015 insights from the co-founder of America’s largest paint party Life in Color, Estonia’s electro-phenom Mord Fustang, and Holy Ship! regular/bass tastemaker T.Williams.

On a somber note, it is unlikely this column would ever have been launched without the work of the late Alex Omes, Ultra Music Festival co-founder and legendary Miami dance music promoter. Ultra was my first music festival and the reason I have dedicated so much of the last decade grooving to electronic vibes. We will never forget the work you did, Alex.

The Rise of The Chainsmokers 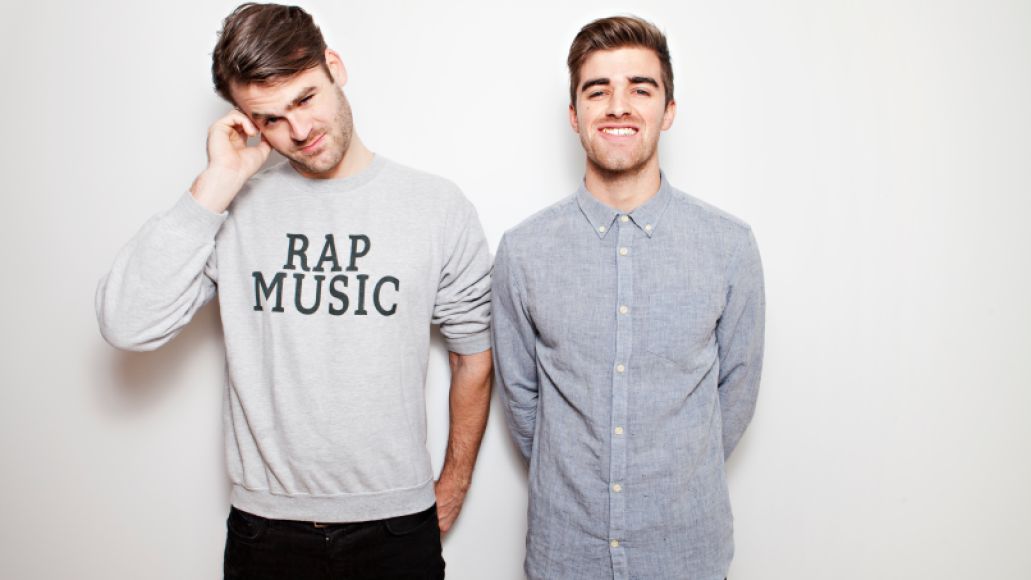 The Super Bowl might only last four hours, yet the fervor now spills across seven-days beneath the bright Glendale sun. The flood of visitors can choose to kill some down time at the Glendale Chocolate Affaire or Gospel Celebration, and anyone looking to break a sweat will most likely wander toward the electro-shenanigans of The Chainsmokers. Generating over 287 million YouTube views, the duo’s viral hit “#SELFIE” epitomized the habits of a new smartphone culture. One where “BRB” has lost all significance because we no longer step away from our devices.

While the work of Alex Pall and Drew Taggart seems to come from a couple of class clowns, the Northeast natives share more in common with the calculating mind of Russell Wilson than they do with consummate playboy Johnny Manziel. Each possesses the skills to make a decent living within clubland; Taggart arrived with a production background, while Pall entered into the project in 2012 after already making a name for himself as a DJ across the NYC underground. However, it was the work of a well-constructed team that got the project signed to Republic Records in less than a year. Soon, the duo started popping up at block parties across the States. Without University of Pennsylvania alumnus Adam Alpert pulling Taggart from his parents’ basement in 2012, it’s unlikely Taggart and Pall would have ever discovered their bond.

“Adam is a beast. He feeds off of work. It’s the only thing that makes him happy. That and dessert,” the duo say half-jokingly over an email exchange. “And we know that he always has and will have our best intentions at heart. That gives us a lot of confidence to focus on the things we need to focus on. Plus, it’s just cool to grow as a team together — squad since day one.”

Once they connected, the barriers to success eroded around the duo. “The [artistic chemistry] was as instantaneous as it gets. We just shared similar tastes and were ambitious and thought, why not give it a shot? We certainly didn’t have much to lose!”

From the onset, the team eyed international appeal, bringing in Indian film actress, singer, and winner of Miss World 2000, Priyanka Chopra, for their debut single, “Erase”. The soaring vocals and wobbly dubstep bass line of that track, along with the rather monotonous build of follow-up “The Rookie”, highlight a duo borrowing from the major players in the scene while they honed their individual skill sets and collective production language. “We will each always have our strengths and weaknesses, which we recognize and respect in each other,” remark the duo when asked about their initial fusion. “That in many ways makes us so productive.” Combine those talents with a shared appreciation for scene satire, and the result was 2014 crossover hits “#SELFIE” and “Kanye West”.

The rise was quick, not easy. While simply performing at Ultra brings acclaim, the pair were tasked with first opening the Main Stage on Friday and then closing down the festival’s smallest stage that same evening — each among the more forgettable sets of any event. However, the duo made their rounds through South Florida that weekend, hitting up parties from the likes of Big Beat, Dim Mak, and Pete Tong. From there, the party didn’t stop for The Chainsmokers, who didn’t take one solid week off while they crisscrossed the globe in 2014. Along the way, the pair were sure to keep EDM fanatics entertained across social media, a task they find much more challenging then actually performing: “People have such strange senses of humor and are so quick to get pissed off. We just started a Tumblr, which we haven’t told anyone about, so we can really just post all the shit we love and want to always share but get too scared to. It’s not cool to be scared of your fans. One day we want to be like Tosh.o and be able to offend everyone and just not give a fuck!”

It is that balance and calculated risk that have helped the duo and their team navigate the treacherous realms of big-room, big-budget beats. Since joining up with Adam, The Chainsmokers have expanded the team to include “Ike Love Jones and Enes ‘the Serb’ Kolenovic.” According to Pall and Taggart, “Ike is our creator. He just creates shit. He is all over the place, but he is the man, and he henches for us, and Enes the Serb is Adam’s right-hand man, thus our right hand man as well!”

Despite the viral success of “#SELFIE” (which the guys never expected to hit the way it did) and the subsequent growth of the team, the pressure still comes from the producers alone: “We always want our records to do as well they possibly can, but we just make music we really love. We know some will be more appealing to a bigger audience than others, but that’s just how it is. All you can do is just make stuff you think is cool and have fun while you do it.” 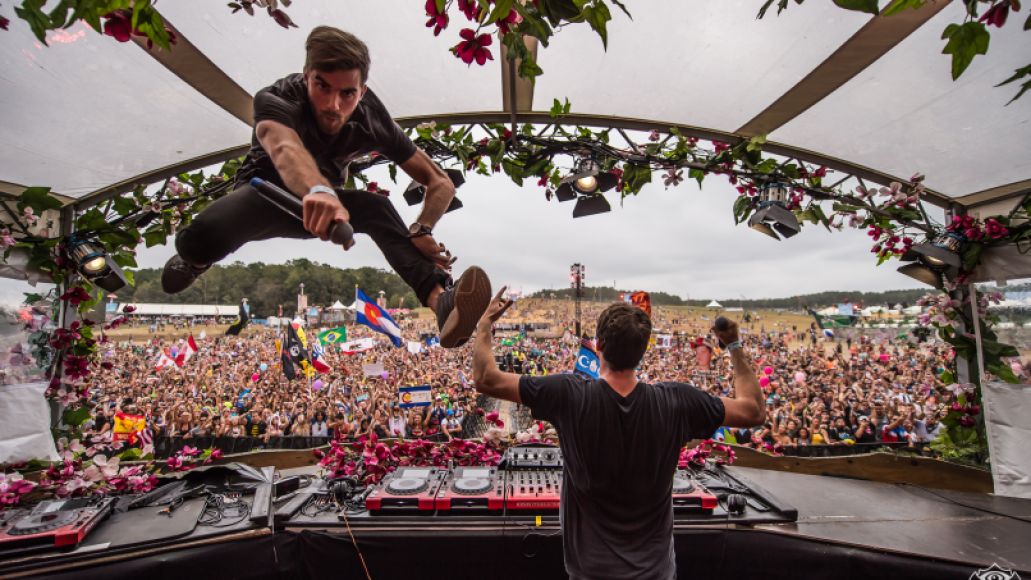 For the Chainsmokers, the opportunity to partake in the pre-Super Bowl festivities is a revitalizing new checkpoint in their careers. “We have a lot of music coming out in 2015. It’s what we are most excited about by a mile, and we are also working with VSL on a special show. We spent the last year traveling around the world DJing for everyone; now we have time to actually create something unique to us, and that’s what we plan to do. We don’t want everyone to see us again and be like, ‘Oh, yeah, same shit.'”

Harsh critiques wouldn’t be anything new for the Chainsmokers, who have have been ridiculed for “letting down dance music” due to their rapid mainstream popularity. But their momentum is too fierce to be slowed by that debate; Pall and Taggart are now motivated by the task of redefining their own sound, one that will likely get the future tag along with everything else new in the current EDM landscape. Like other American EDM royalty like Skrillex, Diplo, and Dillon Francis, this production duo has enough organic character to outlive any suffocating sub-genre. And if the EDM bubble ever does pop, Pall and Taggart have a few reality concepts to keep them busy until the next party happens. The first has a working title of Zero to Hero, which comes off as a mix of Candid Camera and The Pickup Artist, while the second is admittedly just a rip of Rob ‘n’ Big meets Key and Peel. The crossover isn’t unprecedented; Dillon Francis is about to launch his own show, and Australia’s Stafford Brothers already drew a road map for the DJ duo to jump into the dinner table conversation.

No matter the median, The Chainsmokers just want to entertain. So while the scene debates about the validity of EDM, sub-genre tags, and the many publicized rankings, Alex and Drew will be behind the decks giving some fanatic the night of his/her life.

Keeping in tune with the more colorful aspects of EDM, The Drop continues with a Q&A with Life in Color co-founder Patryk Tracz

The Drop Vol. 08: The Chainsmokers, Life In Color, Mord Fustang, T.Williams, and keeping warm with MANIK