Finally! After months of secrecy usually reserved for more prestigious franchises, director Josh Trank and 20th Century Fox have unveiled the first look at the upcoming reboot of The Fantastic Four. A two-minute teaser trailer for the film premiered online Tuesday morning and can be seen below.

Fox’s latest superhero epic based on the Marvel comic stars Michael B. Jordan (Friday Night Lights) as The Human Torch; Whiplash star Miles Teller as Reed “Mr. Fantastic” Richards; House of Cards star Kate Mara as Sue Storm, aka The Invisible Woman; and Snowpiercer’s Jamie Bell as Ben Grimm, aka The Thing. Black Mirror’s Toby Kebbell will be filling the villainous role of Victor “Dr. Doom” Domashev, with Reg E. Cathey and Tim Blake Nelson in supporting roles. The film is due out August 7th, 2015.

The trailer comes on the heels of a new interview with Collider in which Trank and writer Simon Kinberg (X-Men: First Class) spoke extensively about the film’s influences and development, in addition to sharing an on-set photo of Kinberg with Jordan. As you can see, The Human Torch’s outfit is a huge departure from the comic series, where the team usually dons blue suits of “unstable molecules” emblazoned with the “4” logo. 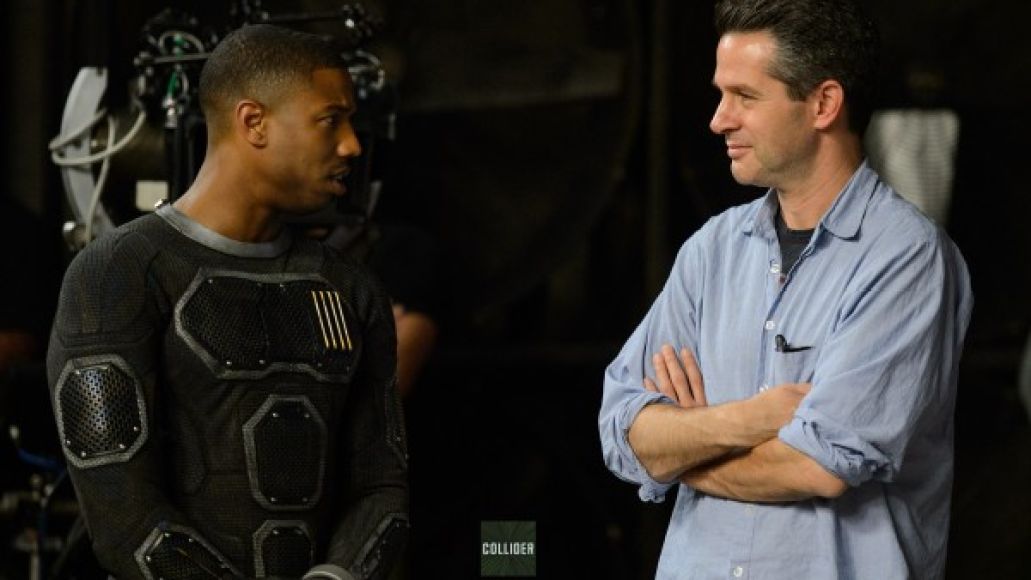 Though the film itself is a mainstream superhero flick, Trank credits the films of venerable horror originator David Cronenberg as a big influence on the movie. The director singled out Scanners and The Fly as films that had impacts on the way this film will look. “I would say that the science fiction of it is a big thing that sets it apart from most of the other superhero genre films,” Trank said. “I’m a huge David Cronenberg fan, and I always viewed Fantastic Four and the kind of weirdness that happens to these characters and how they’re transformed to really fall in line more with a Cronenberg-ian science fiction tale of something horrible happening to your body and [it] transforming out of control. And the potential for a hard sci-fi take on that material makes me really excited.”

Among the other revelations is that renowned composer Philip Glass will be taking on the duty of scoring the film alongside the prolific Marco Beltrami (The Hurt Locker, Snowpiercer). Glass has been scoring movies for over four decades, and has been working heavily in film over the past ten years, but this marks his first superhero film and by far the most mainstream project he’s been a part of. (Ed. note: Glass also made it to the final round of our Greatest Film Composer of All Time poll.) The music in the film’s trailer isn’t a part of Glass’ score, but Ólafur Arnalds’ “Main Theme” from Broadchurch.

For more, including how the Ultimate line of comics impacted the film’s origin story and how it might connect to Fox’s X-Men films, head to Collider.