Art and pop culture have long been indicators of the popular ideal of love. It’s hardly even a question of quality – it’s what people respond to. From Casablanca and Pride and Prejudice all the way to Twilight and P.S., I Love You, we can effectively track how affection looks for each generation. If you’re ever curious what the state of romance is, wander over to a movie theater or record store around Valentine’s Day.

It’s hardly a coincidence that both Father John Misty’s I Love You, Honeybear and the film adaptation of E.L. James’ Fifty Shades of Grey came out this week. For better or worse, these two works delve deeply into what intimacy looks like in 2015. (Note: Minor Fifty Shades spoilers below.)

It’s easy to crucify Fifty Shades’ titular character and his “love interest” for presenting an unrealistic and unhealthy view of relationships. Understandably so. Christian Grey is set up immediately as some sort of Bondage Batman. He has all the playboy charm of Bruce Wayne, but instead of fighting for justice at night, he convinces women to become his personal sex slaves. Most of the film’s plot revolves around him trying to get a meek, young woman, Anastasia Steele, to sign a consent contract that would allow him to have his way with her using whips and cattle prods. But many of those same characteristics that Christian Grey displays are simultaneously celebrated in Father John Misty mastermind Josh Tillman. There’s clearly a difference in execution, but let’s first examine their commonalities. 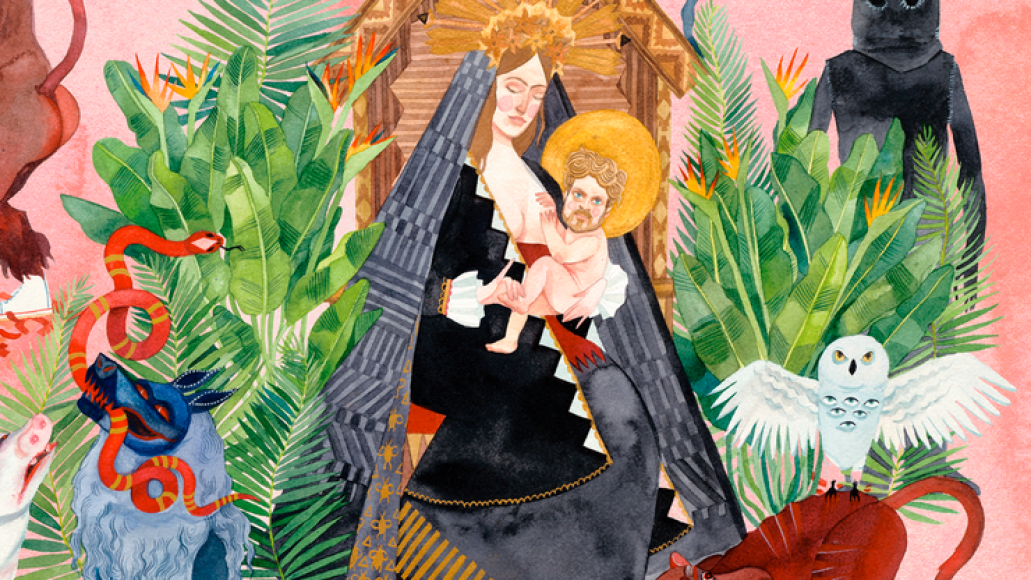 Both Grey and Tillman approach intimacy from a very masculine perspective, using dominating language. In fact, Grey even labels himself as a dominate. He has to “exercise control in all things.” Early on when the meek Steele proposes the notion of making love to Grey, he insists, “I don’t make love. I fuck. Hard.” For all of Tillman’s penchant for absurdity, he never quite reaches this level of heavy handedness. But he might as well have. Many of the lyrics on I Love You, Honeybear implicate him as a ravaging sex fiend. Within the first verse of the album’s title track, he sings, “Mascara, blood, ash, and cum/ On the Rorschach sheets where we make love” — an image that could have been included in the Fifty Shades set descriptions. Very quickly he makes it clear that he’s not one to take things at what most would consider a reasonable pace. Later in the song, he describes bending his wife over the altar, making the neighbors think they’re “conceiving a Damien.”

This type of talk isn’t purely fictitious. When I left the theatre with my wife, one of the first things she said about the movie was how it seemed to play into the stereotype that all men care about is sex. It’s little above locker room bragging, talking about your latest lay and making yourself out to be a sex god. The implications are that Grey and Tillman’s lovers are having pleasurable experiences, but it’s not terribly emphasized. This is especially troubling with Fifty Shades, where it’s all framed from Steele’s perspective — but more on that later.

Clearly, with Grey, things are purely physical. He’s not interested in anything more. He also disturbingly feels an urge to punish Steele. In the film, his motivations aren’t fully explored, only glanced over with short diatribes about abuse in his younger years. Her misbehavior is met with spanking and belts. The closest we get to this on Honeybear is on “The Night Josh Tillman Came to Our Apt.” in which Tillman describes all the annoyances of a previous or potential lover. This woman drives him nuts with her narcissism and the “soulful affectation” she puts on when she claims to sound like jazz vocalist Sarah Vaughan. At the end of the track, she asks Tillman to choke her during sex. With all of his pent-up aggression, he obliges her.

Each man also gets swept up in the old cliché of chance encounters that lead to love at first sight. This is where Grey and Tillman begin to deviate: Grey meets Steele after she interviews him for the paper, while Tillman introduces himself to Emma (aka Honeybear) at a corner store. Each become infatuated, but their intentions couldn’t be more different. Grey sees Steele as something to claim as his own. That isn’t an exaggeration; he actually says in the film that he wants her to become his, as in ownership. When he reflects back on this moment, he’s reinforcing the fact that he needs her for his own pleasure.

Grey is all but willing to whisk Steele away, showering her with gifts and thrilling her with helicopter rides to Seattle. But in the end, she’s expected to bend to his will. He says he doesn’t “do romance.” His behavior goes beyond a sadism fetish into devaluing a woman’s worth. I don’t mean to portray sexual exploration in a bad light, but I absolutely do mean to knock down misogyny. It’s not a fine line — it’s a line you can see all the way from one of Grey’s private jets.

Tillman looks back on the moment at the store as serendipitous and life changing. He’s a romantic at his whiskey and acid-stained heart. Despite all of his flaws and gallivanting, he craves mutual affection, and he’s willing to let his Honeybear change his life. In “Chateau Lobby #4 (in C for Two Virgins)”, it’s Tillman who is left in bed the morning after and told he can stay for as long as he likes. He’s comfortable with being the one who’s saved; he doesn’t have to save Honeybear. Without that romance, Tillman would just come across as another asshole. But he’s trying. Throughout the album he’s self-aware enough to recognize his bountiful flaws. He isn’t about fucking; he’s about “making love.” Tillman knows he’s not the ideal husband, but he’s thankful for the chance, and he’s trying to make the best of it.

There’s something admirable in making an effort. To say that Tillman should be a role model for modern romance would be questionable, but the Grey alternative doesn’t exactly seem healthy, either. It can be difficult to believe in love with the world seemingly crumbling around us every day, but that doesn’t mean it’s worthless. What Honeybear embodies is the gift love can bring. Giving yourself up completely, physically and emotionally, can never compare to wielding power over someone else. The fuck-ups along the way just add wisdom and perspective. Fighting through the pain and accepting it as part of a greater gift is what gives gravitas to the album closer, “I Went to the Store”, especially when Tillman softly sighs, “For love to find us of all people/ I never thought it’d be so simple.”

It really isn’t more complicated than that. No playroom required.