Love and the apocalypse have never been so intertwined. Being open and vulnerable requires the dissolution of the ego, a razing of the scaffolding of self-importance. Father John Misty’s work hinges on the difficult truth that he must level himself to allow room for another. Over its 45 beautiful but tortured minutes, I Love You, Honeybear weaves a complicated narrative of love gained at the expense of the individual.

Josh Tillman, the man behind the moniker, gained success as the harmonizing drummer for Fleet Foxes (which ended in disaster), but his solo career as J. Tillman was marked by the self-serious tones of For Emma, Forever Ago without all the “fun.” In a legendary act of self-mythologizing, Tillman took a journey down the West Coast and, propelled by copious hallucinogens, created the Father John Misty persona. It was an affectation that perhaps began in farce, but soon found surprising depth, range, and success that Tillman’s solo work never achieved.

Separating Father John Misty, the persona, from Josh Tillman, the person, is convoluted and unnecessary. But it’s worth noting that in the interim since 2012 debut Fear Fun, Tillman married his current wife. It’s impossible to listen to this record and not hear the jagged elements of self-realization, as if the “mask” of Father John Misty is used to speak in honest ways he couldn’t express under his own name.

With Father John Misty, nothing is ever as it seems. Even when he’s declaring true devotion, as he does on opener “I Love You, Honeybear”, rising strings and soaring harmonies shoot emotional energy through the line “My love, you’re the only one/ I want to watch the ship go down with.” Yet, in this earnest moment, he cannot express his love without framing it in the darkest circumstances imaginable.

Father John Misty borrows liberally from his Laurel Canyon forebearers (chiefly The Eagles and The Flying Burrito Brothers) and also infuses sonic elements from a diverse range of influences. There is no detachment as mariachi horns rise out of the mix on “Chateau Lobby #4 (In C for Two Virgins)”, further adding to the song’s celebratory tone. String arrangements, snarling guitar solos, and heavenly choral harmonies rise and fall throughout, as tremendous care has been put into fusing these layered arrangements with the album’s complicated emotional weight.

Tillman’s writing, already literate and caustically funny, has progressed as well as his arrangements. Twinkling bells, classic pop ooh-aahs, and a breezy melody mask the nasty humor of “The Night Josh Tillman Came to Our Apartment”, three and a half minutes of excoriating joke-making at the expense of a manic pixie dream girl. In this unwavering attack, Tillman saves the most brutal insults for himself as he mocks his own sexual inadequacy. Is he truly disgusted by his self-involved paramour, or is he lashing out in response to his own insecurity?

Among the album’s sweeter love songs,  the sentiment of “Nothing Good Ever Happens at the Goddamn Thirsty Crow” is rooted in a declaration of love but framed in the negative. Something like revelation comes courtesy of a near-death by overdose on “Strange Encounter”. After the overdose, an emotionally sober Tillman presents his most personal statement with the fiery “Ideal Husband”, where the narrator confronts his soon-to-be-spouse and reveals the skeletons in his closet — listing his flaws, weaknesses, and misdeeds. As the song erupts into the album’s emotional climax, he questions his suitability as a life partner in a moment of startling honesty, leaving a frozen uncertainty about whether we should laugh, cheer, or weep.

Tillman never misses an opportunity to mock and undermine the overarching institutions of our lives: capitalism, religion, and the contemporary culture of love. “Bored in the USA” and “Holy Shit” are among his simplest, largely acoustic compositions, but this space lets his tremendous voice and lyricism take center stage. “Bored in the USA” offers several verses that attack the social ideal that dictates we all pair up and watch each other disintegrate. The album’s emotional nadir is reached on “Holy Shit”, in which the narrator arrives at the conclusion: “Love is just an institution based on human frailty/ What’s your paradise got to do with Adam and Eve?/ Maybe love is just an economy based on resource scarcity/ But what I fail to see is what that’s got to do with you and me.”

Father John Misty gives no lasting answer to the question of whether love can survive modern self-involvement. As the album winds toward its finale, Tillman fantasizes about abandoning society so he and Honeybear can reside in peace. But leaving everything behind, good or bad, is not a solution — just an escape. In the end, Tillman acknowledges this, too, pointing out that his brush with redemptive love is itself just a chance encounter.

Tillman makes a fool of himself for our entertainment, but a deep truth is rooted in all his caricatures and jokes. Modern man, as presented by Father John Misty, is a deeply conflicted entity all too comfortable lashing out in anger and irony when confronted by his own insecurity — and simultaneously deeply desirous of the solace provided by love and affection.

Pick up a copy of I Love You, Honeybear here...

I Love You, Honeybear Artwork 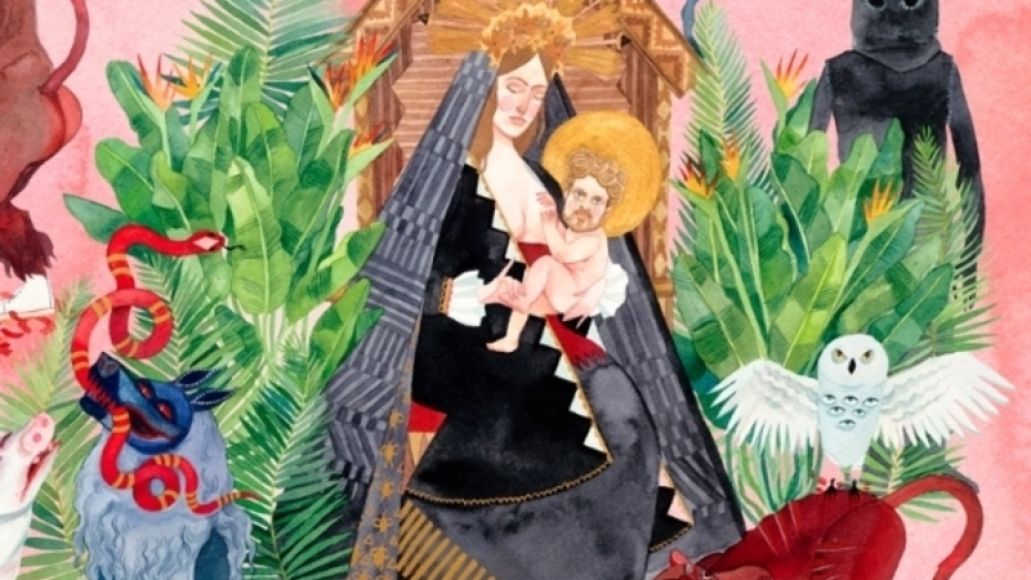 Father John Misty Wrestles with the Heart and Ego on I Love You, Honeybear: Review