Björk’s new album, Vulnicura, has been out for over a month now; however, it’s been conspicuously absent from Spotify’s otherwise expansive collection. It’s not an oversight by PR, label, and marketing folks, though. As the Icelandic singer details in a new interview, there’s a reason users of the streaming service (myself included) shouldn’t expect to see the LP pop up anytime soon: “It’s not about the money; it’s about respect.”

Vulnicura, Björk’s ninth studio album and one especially near and dear to her heart, was originally slated to hit shelves next month. An unfortunate leak forced her and her camp to surprise release the record two months early, a rushed process her label described as “nightmarish.” It’s not too surprising, then, that Björk is reluctant to put the album on Spotify where it can be streamed for mere pennies.

“Guess what? This streaming thing just does not feel right,” Björk said she told her manager. “I don’t know why, but it just seems insane.” She added, “To work on something for two or three years and then just, ‘Oh, here it is for free.’ It’s not about the money; it’s about respect, you know? Respect for the craft and the amount of work you put into it.”

Going forward with her music, it looks as though she may take a cue from Netflix’s approach. “You go first to the cinema and after a while it will come on ­Netflix. Maybe that’s the way to go with streaming. It’s first physical and then maybe you can stream it later.”

Björk is just one of many big-name artists who have spoken out against Spotify and other similar platforms. If you’ll recall, Dave Grohl “doesn’t fucking care” about the streaming service; David Byrne and Beck have called the whole model “broken”; and Thom Yorke famously described Spotify as “the last desperate fart of a dying corpse.” It’s worth noting, though, that unlike Taylor Swift (who pulled her entire discography from Spotify earlier this year), Björk’s left her previous albums — including 1997’s Homogenic and Vulnicura predecessor, 2011’s Biophilia — up on Spotify. 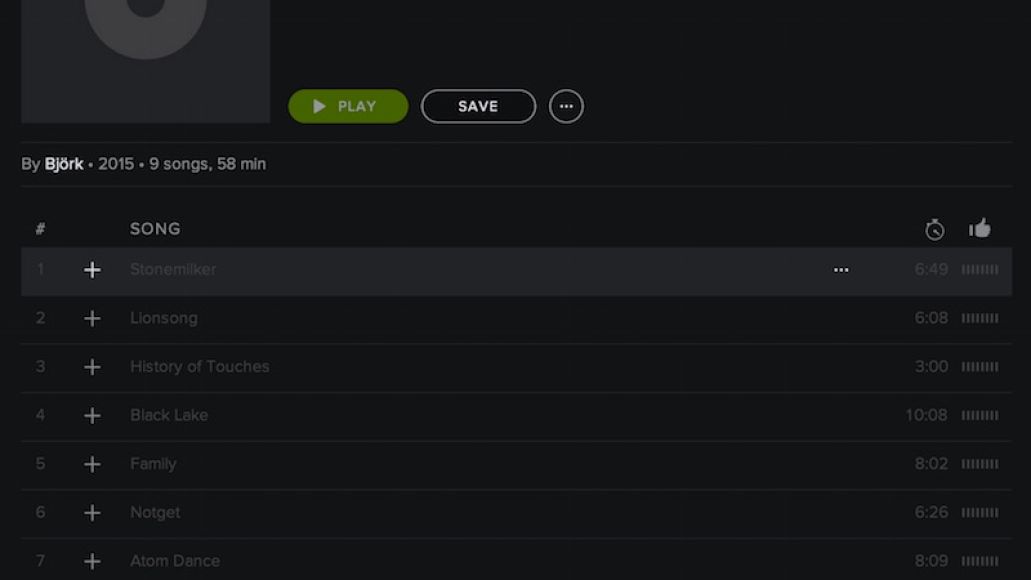 Björk pulls new album from Spotify: "It's not about the money; it's about respect"