Music fans enjoy listening to vinyl records more now than at any time in the last two decades. Neil Young, however, doesn’t see the healthy boom as anything more than “a fashion statement.”

In an interview on Southern California Public Radio’s art show The Frame, Young called out record companies for tricking consumers into purchasing what he explained is nothing more than CDs printed on polyvinyl chloride. “A lot of people that buy vinyl today don’t realize that they’re listening to CD masters on vinyl, and that’s because the record companies have figured out that people want vinyl,” the iconic rocker said. “And they’re only making CD masters in digital, so all the new products that come out on vinyl are actually CDs on vinyl.”

As Fact points out, Young’s facts aren’t entirely in order, as numerous modern records are indeed mastered for vinyl. At the same time, the reissue market at the head of the vinyl resurgence does rely primarily on digital masters.

“It’s a niche and it’s a great niche and it’s a wonderful thing and I hope people continue to enjoy vinyl and it continues to grow, because it’s a good thing,” Young went on to say, before adding the caveat that we live in a “convenience-oriented society and vinyl is not a convenient thing.”

Meanwhile, Young’s own foray into convenience-oriented music listening, the PonoPlayer and PonoMusic service, recently became available to the public. Perhaps his comments on The Frame were spurred on by the wholly negative reviews Pono has been facing. Sam Machkovech of Ars Technica said the people behind Pono “are kinda full of crap,” while Gizmodo’s Mario Aguilar has a pretty thorough takedown of the company’s scientific claims.

Most damning of all, however, is a blind comparison test conducted by David Pogue for Yahoo!. Pogue gathered 15 individuals between the ages of 17 and 55. Using the PonoPlayer, the iPhone, and both a pair of Sony MDR 7506 headphones and Apple earbuds, he played participants three tracks from varied genres purchased through iTunes and the PonoMusic store. The participants overwhelmingly said the audio sounded better on the iPhone. 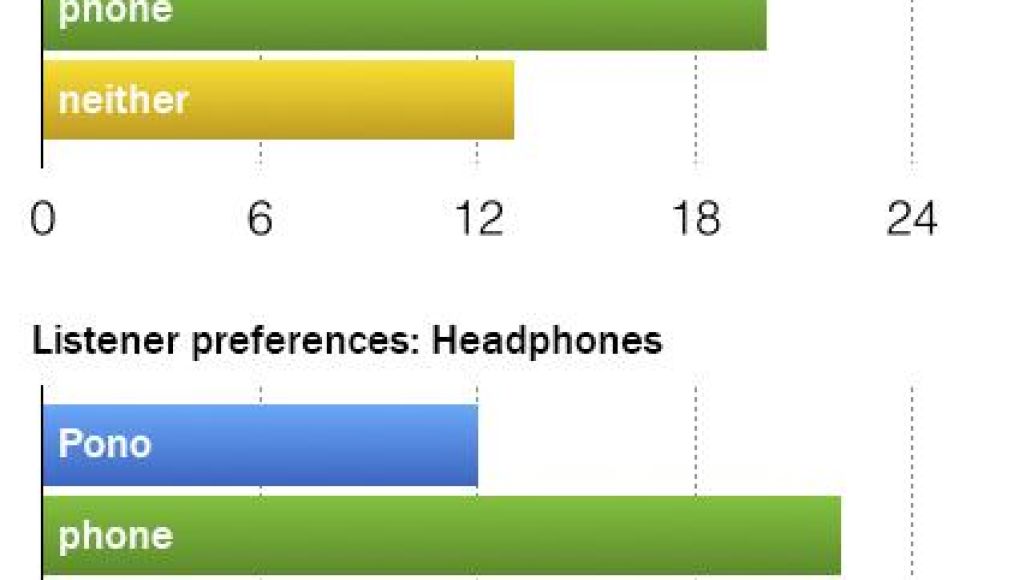 Any difference that played positively in Pono’s favor was slight, with the subjects saying there was an average of a 10% increase in quality with the new device. Fourteen of the 15 participants said they wouldn’t pay the $400 price tag for the device; the one that would actually already had a PonoPlayer — and even he chose the iPhone in the blind test.

Pogue reached out to Pono for reaction to the results, and heard back from Young himself. “Of approximately 100 top-seed artists who compared Pono to low resolution MP3s,” Young replied, “all of them heard and felt the Pono difference, rewarding to the human senses, and is what Pono thinks you deserve to hear.”

Pogue noted that the phrase “low resolution MP3s” was a red herring, as songs purchased from iTunes are in a decent 16-bit/256Kbps AAC format. He points to a number of scientific studies that argue humans simply can’t hear the difference that comes with the increased data of Pono’s high-res audio files.