It’s rare that the Grammys please everyone. Just ask Radiohead, Beck, and Eminem, who all lost 2001’s Album of the Year to Steely Dan in one of the most stunning upsets in the show’s history. However, incidentally enough, much of the recent controversy surrounding music’s biggest night doesn’t have anything to do with music at all — it’s race.

The question of whether the Grammys have “a race problem” is hardly a new one, to be sure, but the last couple of Grammys have been especially dubious. Who could forget the moment when Macklemore and Ryan Lewis dominated 2014’s hip-hop categories, basically “robbing” Kendrick Lamar and his masterful good kid, m.A.A.d city in the process? Sunday’s award show gave us two new instances suggesting race might’ve played a bigger part than the Recording Academy voters are willing to admit: 1) A white man (Sam Smith) collects four of the ceremony’s prestigious wins and 2) A white man (Beck) triumphs over one of the music industry and pop culture world’s most impactful records to date (Beyoncé’s Beyoncé).

But just how long has this been going on? How long before people of color are shut out of categories completely? (If you’re keeping count, the 2015 Grammys featured zero black artists in the Best New Artist or Record of the Year categories.) A new graph from Vocativ sheds some light on the Grammys’ trend toward “whiteness” over the last couple of decades and the conclusions are pretty bleak. 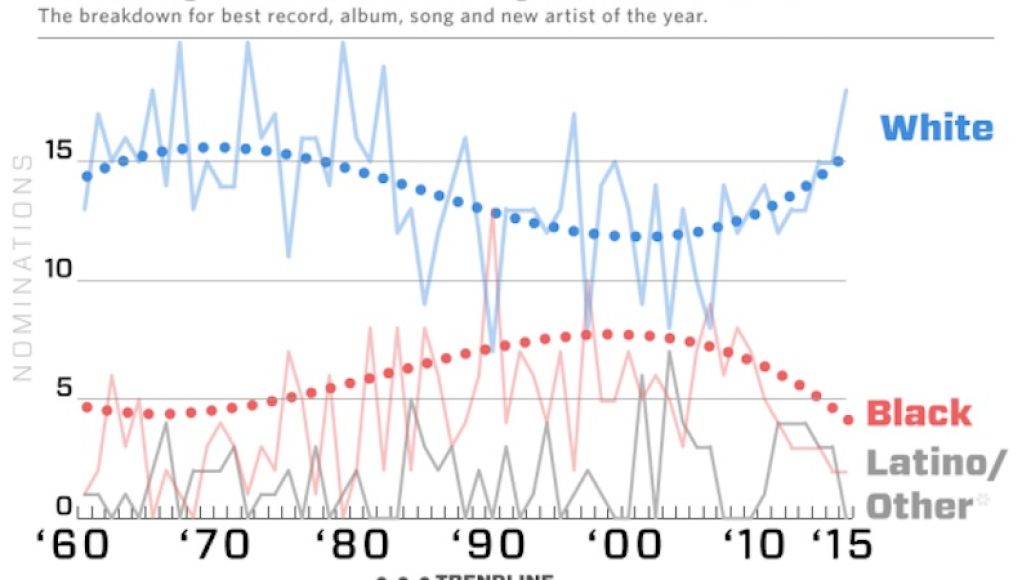 For comparison’s sake, Vocativ also studied Billboard’s Hot 100 Artists charts since 1965 to see whether racial disparity has also been an ongoing trend. Long story short: Yes, the graphs are nearly identical. 2013 might’ve been the least diverse year for music, as it was “the first year there wasn’t a single black artist with a No. 1 single on the Billboard Hot 100.” 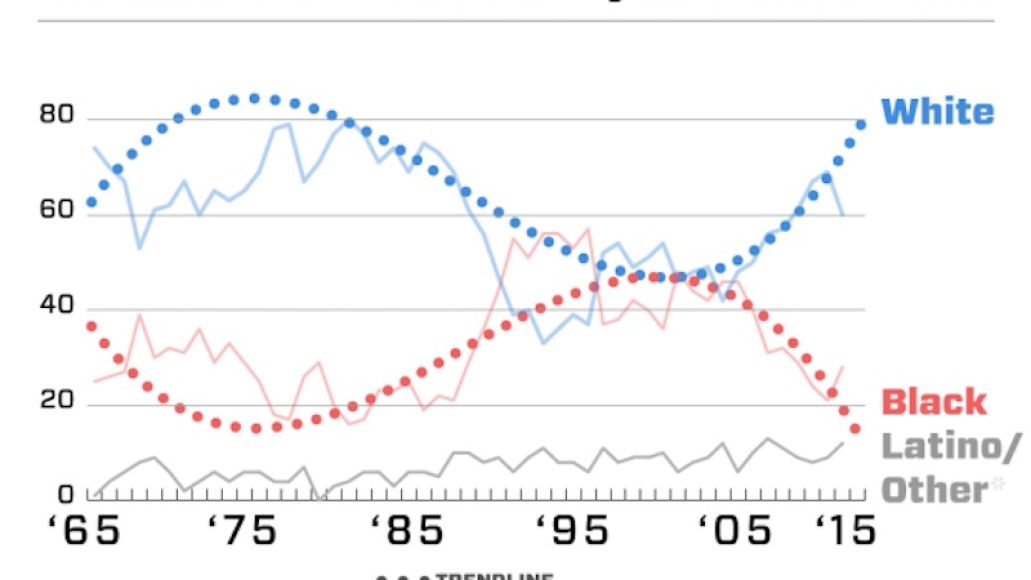 As Kanye West said Sunday night, following his little Beck stage fake-out, the Grammys should be about “respecting the artistry” and nothing else. Here’s hoping the Recording Academy voters heard him loud and clear.

Popular music hasn't been this white since 1981, according to new study