Pretty much everyone thinks that the generation after them enjoys nothing but shit: shitty music, shitty movies, shitty everything. So when we asked the twentysomethings in The Districts what kind of pop culture they’d like to discuss for our latest edition of Dusting ‘Em Off, we were pleasantly surprised they were game to talk about The Breakfast Club, Billy Madison, and Bright Eyes’ landmark album I’m Wide Awake, It’s Morning, which all just celebrated their 30-20-10-year anniversaries, respectively.

Then again, we shouldn’t have been that surprised. The Districts’ second full-length, the excellent A Flourish and a Spoil, stays firmly rooted in jagged ’90s classicism, indicating that the band has an admiration for art well before their time. We phoned the whole gang — frontman Rob Grote, guitarist Pat Cassidy, bassist Conor Jacobus, and drummer Braden Lawrence — while they were on tour to get their musings on these pop-culture “B” words.

I was 10 when Billy Madison came out, which means most of you guys probably weren’t even born yet. How did you get into the movie? Was it introduced to you by your parents, or did it float around your social circles while in school?

Braden Lawrence (BL): Billy Madison, Happy Gilmore, Mr. Deeds — those were some of the first PG-13 movies I saw. So I was pretty into them. I feel like everyone kind of talked about them. 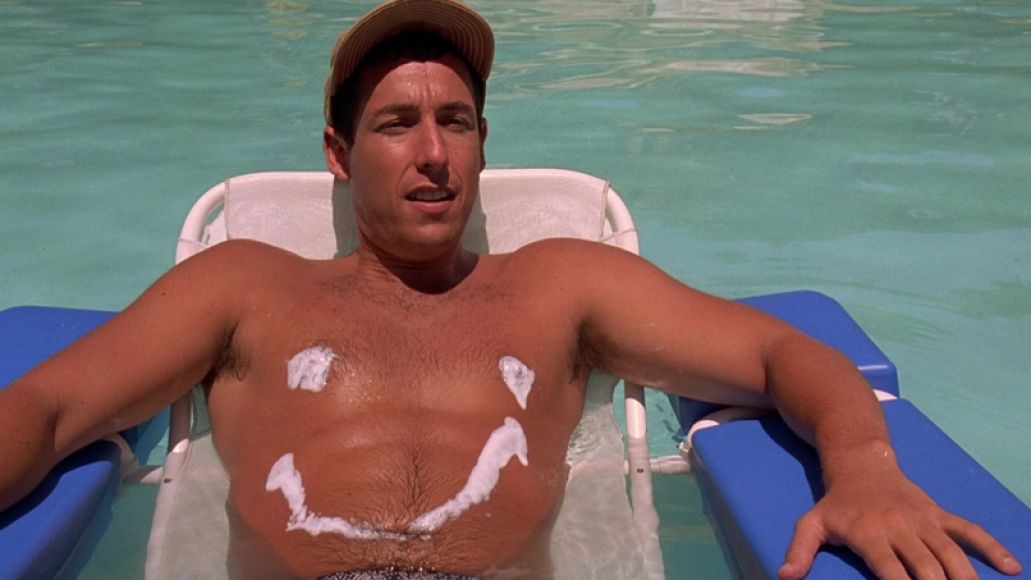 Pat Cassidy (PC): I don’t think we do think that! [Laughs.] I think his career’s just gone on an upward slant ever since Billy Madison. That movie where he played the woman and the man…

PC: That movie was particularly great. I think it was the most important movie of our generation. [Laughs.]

CJ: Adam Sandler’s just on top of his game, you know what I mean?

BL: We actually got into him through one of his comedy albums. They’re insane.

RG: Yeah, it’s like really terrible, but kind of awesome at the same time.

I think The Buffoon was on They’re All Gonna Laugh at You!  “We fed my neighbor’s snake beer and got it all fucked up. It was slithering this way and that.” It’s such a dumb thing to say, but ridiculously funny, too. Going down the line, what’s your favorite part of Billy Madison?

Is there a Terminator reference?

RG: Yeah, it’s like the best scene. [Laughs.] No, I’m the only one in the band who hasn’t seen the movie the whole way through. I’ve only seen parts of it, so I can’t really give a fair answer. Let’s just say I like the Terminator scene.

What about the rest of you guys?

CJ: Mine would be the penguin scene.

PC: My favorite is definitely the scene where he’s calling all the people that he wronged, and he calls Steve Buscemi, who just puts lipstick on and crosses his name off the list of “People to Kill.” That’s pretty dark.

BL: “If peeing your pants is cool, then consider me Miles Davis!”

That’s probably the best and most-quoted line in the whole film. Have you guys ever thought about covering that “Billy Passed the Third Grade” song live?

CJ: It’s never been considered. (Braden sings “Billy Passed the Third Grade” in the background.) Let’s do an a cappella version where we don’t even play any instruments.

Chicago would really appreciate that. Last Billy Madison question: Would you say the film’s been a source of bonding for the band? I know Rob hasn’t seen it all the way through, but have you ever watched it together, and do you quote it a lot?

PC: Maybe we’ll do that.

BL: Maybe we’ll have a little date night tonight. Get a nice white wine, put some shrimp on the barbie, and watch some classic Sandman.

PC: No, I think it’s kind of dramatized, but I think that’s what’s enjoyable about it, too.

BL: I think it’s what everyone wishes high school could be like.

RG: It’s just a very romantic view of stuff like that. 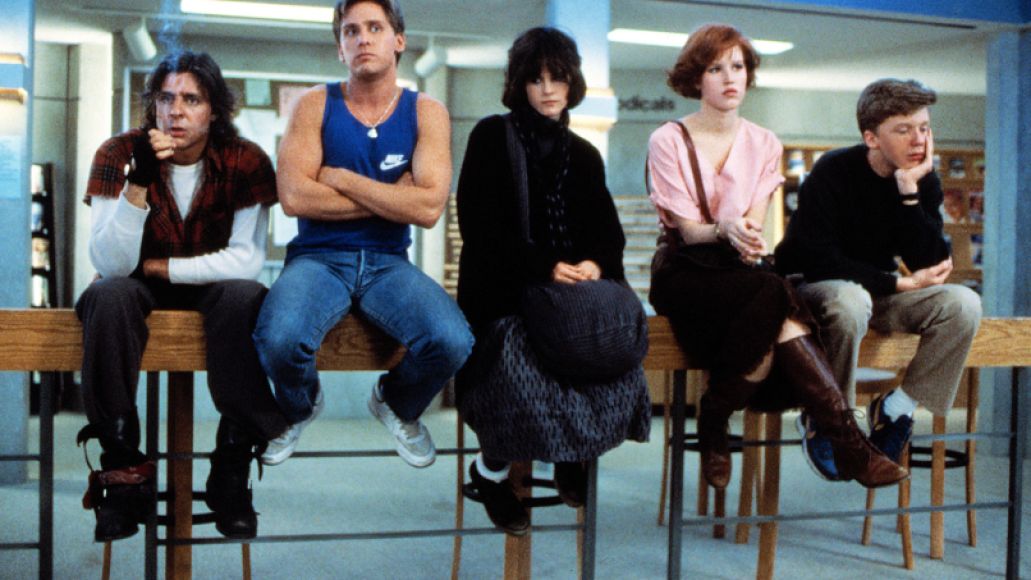 Do any of you relate to it on any kind of realistic level?

BL: I like it a lot, but I don’t really relate to it. I just thought it was kind of cool and funny.

What was high school like for you guys? Did you feel like people ran with stereotypical crowds — the jocks, the stoners, etc.?

RG: Kind of. Maybe not as black and white as in a movie.

BL: We kind of kept to ourselves, had a little crew, our little band crew.

RG: We kind of ran the school and pushed everyone around. [Laughs.]

You guys were kings of the school?

BL: No, not at all. We did our thing. Pat was a good quarterback, but we didn’t know him back then.

BL: His high school was way different than ours. I mean, not that different.

PC: It was slightly different. 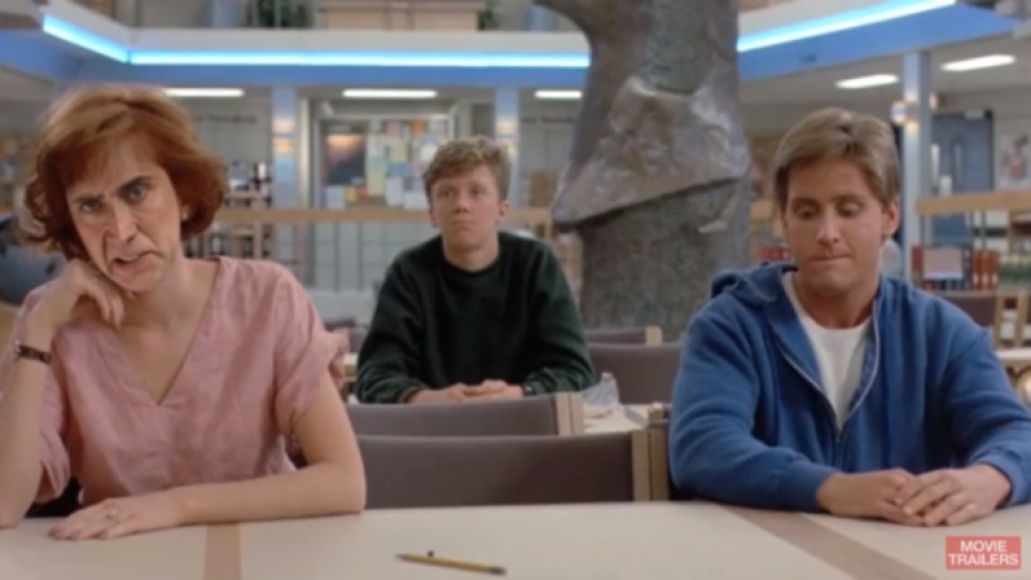 I just read that Nicholas Cage was originally supposed to play Judd Nelson’s part in The Breakfast Club. Is that something you guys would have liked to have seen?

BL: They should make a Breakfast Club 2: Where Are They Now? And now Nick Cage is in it.

BL: Simple Minds played at Electric Picnic, one of the festivals we played. We didn’t see them, but you could hear “Don’t You Forget About Me” in the background while we were eating lunch. Their tour manager was in the same place as me and our tour manager while we were getting passes.

BL: He was just an old Irish … I think he was Irish.

They’re either Irish or Scottish. I can’t remember which one. Do you guys know any of their other songs?

BL: What’s the song by that band The Human League?

I only remember Human League because they mention them in Wet Hot American Summer.

I can’t remember their actual hit, though.

RG: I’m gonna look it up while we talk.

I feel like they have more than one hit. Simple Minds, on the other hand, is just remembered for that one. So you guys didn’t get to meet them or anything?

BL: No, but that would’ve been a good story.

Do you ever do covers live?

BL: Sometimes we do “Bonzo Goes to Bitburg” by The Ramones.

Could you ever see yourself covering Simple Minds?

PC: That would be awesome. I would be down.

So next time you come to Chicago, you’ve got to do Simple Minds and “Billy Passed the Third Grade”.

At first I thought you were just singing the Simple Minds song again. 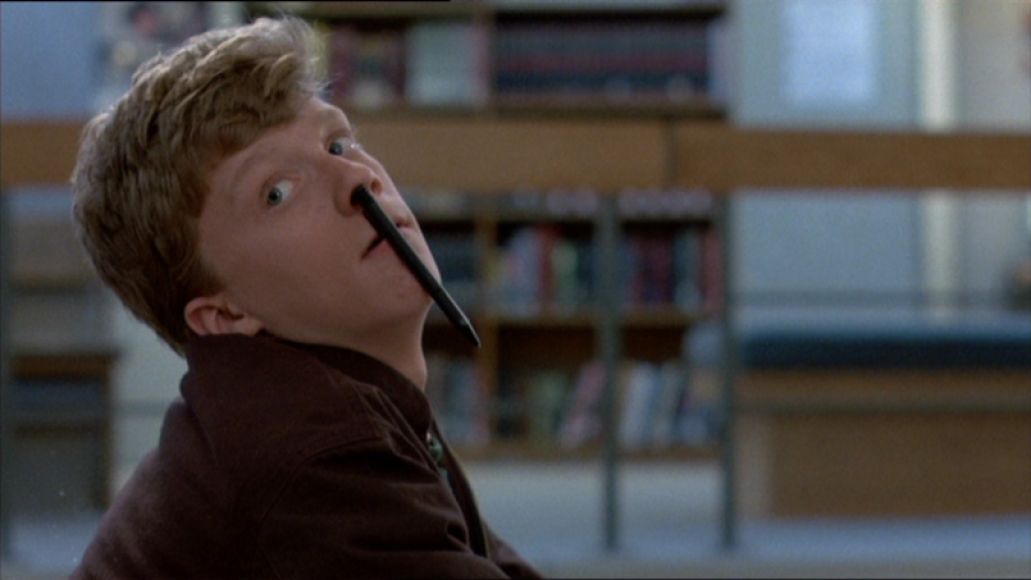 They both start with a very passionate “Don’t You.” So would you say The Breakfast Club is still an enduring classic for your generation? I sound like such an old guy when I say that, but I always wonder if people like the same stuff I did when I was younger.

RG: I think for the most part, yeah. I think a lot of that stuff is passed down from the people you know. My stepsister loved that movie. Conor, you mentioned that your brother showed you Billy Madison. It gets passed down as already being a classic movie.

BL: And how cool is that? School of Rock, too.

Is that where you guys first heard “Bonzo Goes to Bitburg”?

RG: Oh, really? I forgot that was in there.

BL: That was my first time hearing it.

Would you say your tastes in pop culture aligned with the people you hung out with growing up? Or did you like more classic music and movies than other kids did?

RG: Maybe more than some of the people we grew up with. But most of our friends were into that stuff.

BL: Pretty much everyone we hang out with in Philly we went to high school with.

RG: Or at least knew in high school somehow. 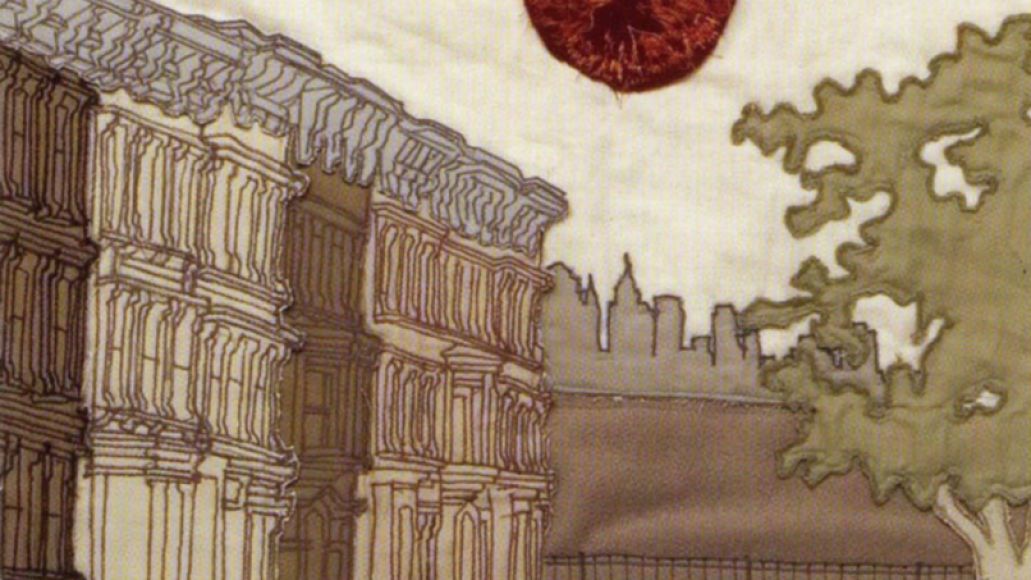 Let’s move on to Bright Eyes then. I’m Wide Awake, It’s Morning just turned 10 the other day. Would you say it’s your favorite Bright Eyes album?

RG: That’s probably the first one I got into.

PC: That moment in “Old Soul Song” where the drum break happens and the big horns come in — that’s one of the best things I’ve ever heard.

There are a lot of interesting start-stop dynamics on the album, like how the opening monologue just launches into “At the Bottom of Everything”. What about the lyrics, though? Do you pay a ton of attention to what he’s saying, or are you more about what’s going on musically?

BL: I think a little of both.

RG: I definitely like the lyrics, but a lot of the songs also just have a good feeling to them.

BL: You can tell he really means what he’s saying.

He tends to get pretty political on his records, not in a specific way — just this general idea of political outrage. Does your music ever get political? I don’t detect it, but that doesn’t mean it’s not there.

RG: Not hugely. Maybe back in the day more. [Laughs.] It was more in a rebellious way.

BL: Not as intense as Rage Against the Machine or anything.

RG: It’s not something I’m opposed to putting in our music if it happens naturally. It just doesn’t really happen that much. “Poison Oak” is on [I’m Wide Awake], right?

BL: I think that “Road to Joy” performance on [Craig Ferguson] where he went completely apeshit was awesome.

Have you guys seen him live before?

BL: We saw him solo. He did a few off that album.

Did he do any of his infamous drunk ranting?

BL: No, we saw him at Newport.

Are any of you Desaparecidos fans? They just announced their first album in 13 years.

PC: I can’t remember the song name, but there’s a skate video to it. I remember that because I was in ninth grade, maybe a little later. That was one of the first bands I joined, and this kid was like, “We’ve gotta cover this.”