The Flaming Lips have made it, and word is the top of the mountain doesn’t look all that different from the bottom. After more than 30 years together as a band, the psych rock group has redefined its limits. As frontman Wayne Coyne tells us over the phone, it’s all due to love.

“We’re masters of it. We know if you keep working and thinking and trying, the good luck comes and you grab it. When the bad luck is there, you have to persevere,” he says. You would be hard-pressed to find someone who doesn’t believe him. Coyne is in the midst of making new music, paintings, and scores, juggling it all with one goofy smile and a head full of madman hair. “Occasionally something really works and speaks to everybody, not just me. That’s when it’s great. This art is your child. You don’t give up. You would never stop trying. That’s what that love is, a love for your craft and reimagining.”

As a band that’s best known for inveterate weirdness, The Flaming Lips face an underlying pressure to outdo themselves. They’ve sold human skulls, put music in a bubblegum-flavored gummy fetus, and held headphone concerts before silent discos were trendy. Their absurdities aren’t gimmicks. They’re habitual blossoms of entrenched creativity. From a distance, it’s reasonable to believe the band splits its time between the studio, a science lab, and a craft megastore. So their next endeavor will raise the stakes once again.

On March 5th, The Flaming Lips will take over Carnegie Hall to perform at the 25th Annual Tibet House US Benefit Concert alongside Laurie Anderson, Philip Glass, Patti Smith, Sturgill Simpson, Tenzin Choegyal Debbie Harry, and Ashley MacIsaac. The long-standing cultural event gathers some of the most influential names to support the work of the Tibet House US, a non-profit educational institution formed by the Dalai Lama in 1987. Between the transcendent live performances and honorary chairpersons Chuck Close, Maggie Gyllenhaal, Peter Sarsgaard, Uma Thurman, and Arden Wohl stopping by, it’s a kaleidoscope of tender hearts and raw sound. As they gear up to play in a little over a week, Wayne Coyne talks in depth about the concert’s core values — peace, love, and patience — with the utmost sincerity. 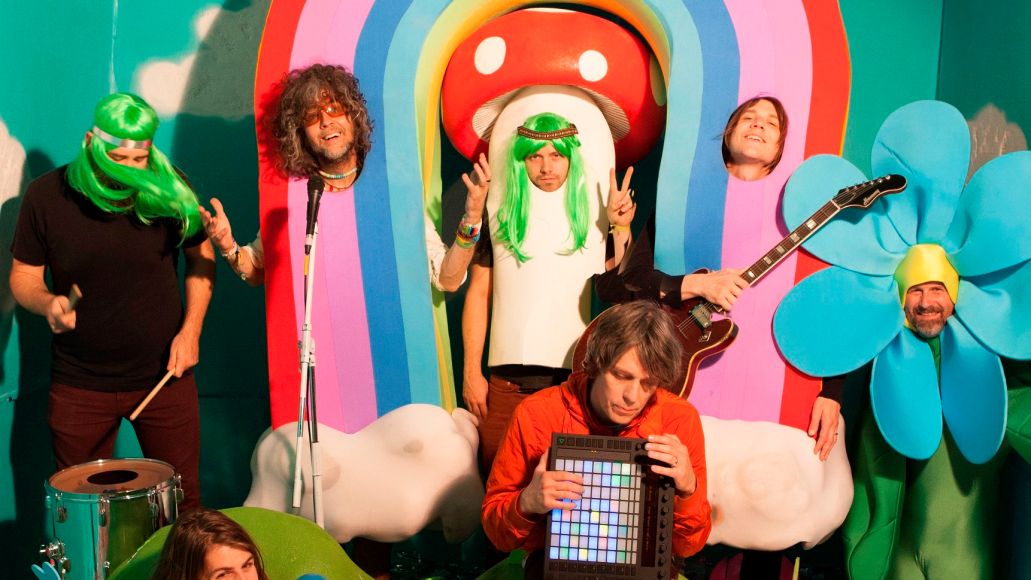 The Flaming Lips infiltrate their music with love. It’s there at its core, but over the years they’ve learned that it can’t be taught. Only performing can light a flame under its belly. “As much as the world has had knowledge of people like Gandhi and Jesus Christ, it doesn’t have an impact on you until you’re around someone in some situation where this patience, love, and kindness has proven to you that this is the way to live,” he says. “You can read and you can think and you can dream and you can have all of that, but until you have a true experience with that type of life, there’s nothing you can do. That doesn’t teach people. If that were true, everyone who claims to have read the Bible would be a great, loving, caring person.”

He pauses to breathe. After a few seconds, he reflects on those he loves and, in turn, how their relationships work, how all relationships work. “Love is really just a one-way street. You can’t really get love,” he says. “But it’s like sunlight; it’s always coming out of you. A lot of people in the world want love, but love isn’t a property that you can have. It’s only a property that can be given.”

Their latest romp in spreading the love is 2014’s With a Little Help from My Fwends, a song-by-song re-recording of The Beatles’ Sgt. Pepper’s Lonely Hearts Club Band. Layered psychedelics filter through retro wizardry to emphasize the undercurrent of love between friends, all the more emphasized by the proceeds going to the Bella Foundation. What started as a single recording of “Lucy in the Sky with Diamonds” with Miley Cyrus soon expanded to a project that roped in Moby, My Morning Jacket, Foxygen, and Phantogram. “When I get people together, I think I can allow and encourage them to share what’s pure for them without forcing society on them. Their ideas shape me,” he explains. He feeds off their creativity as much as they feed off his. “Big personalities are intriguing. That doesn’t mean your force has to be mine. We can both share and experiment and, most of all, learn.”

Given that, the list of collaborators becomes more interesting. Julianna Barwick and J Mascis — both known to be reserved — don’t seem like the artists most likely to show up for a Flaming Lips collaboration. When they enter Coyne’s world, though, they unravel completely. “If you could break them down, see what percentage of them was flamboyant and secretive and scared, I think they would all be the same. Julianna [Barwick] is a fucking freak,” he laughs. “Even though she comes across as a somber, shy girl, she’s fucking funny. If you’re lucky, you get to be around people and see what they’re doing. Most of them are like that. They all have the same percentage.”

That’s part of being Wayne Coyne: He finds the introvert inside everyone. Once he locates it, he offers a hug and helps lure it out. “Someone like Miley Cyrus, we see a side of them in the public,” he explains. “She seems like this freak who needs attention all this time, but if you’re around her for five minutes, you realize you like that. Obviously she is that first part, or else she wouldn’t embrace it, but she’s a sweetheart. She’s an insecure freak like me. That’s exactly why we get along,” he explains. “You don’t know what to do, you have this desire to create, and you’re unsure of what you’re doing but you try and try. I see that in everybody I like, everybody I’ve worked with. When you really get to know them, we’re all struggling with the same things.” Every musician he collaborates with is someone creating an identity, someone figuring out their sense of self as an artist. They’re musicians, too, but what they’re really dealing with is art. Being in charge of something that opaque is onerous.

Growing up in Oklahoma City in the early 1960s, Coyne and his siblings never truly felt constricted by location. Art was everywhere. They explored the cultures of the world because they wanted to learn what others loved. “I don’t know what my life would have been like if I really had to grow up with the city, the people, and the terms of the city,” he says, slightly scared. Traveling the world pushed his definition of love, if only through meeting others and engaging with their culture. “It would have taken me a long time to shake off the ‘truths’ I was taught. It’s a pretty open, wild, funky, fucking cool world. It’s not a thing out to get you, and neither is the internet.” He pauses. “Well, most of the time.”

His younger self may have scoffed at “all you need is love,” but present-day Coyne is sure of that sentiment. The spirit is a grandiose being that can be shared through music, image, and word. To deny others of your shared half is an injustice. “A lot of this comes down to your personality,” he explains. “Some people are a lot more grumpy, selfish, prone to violence, and have too much aggression. We try to not be around those people.” 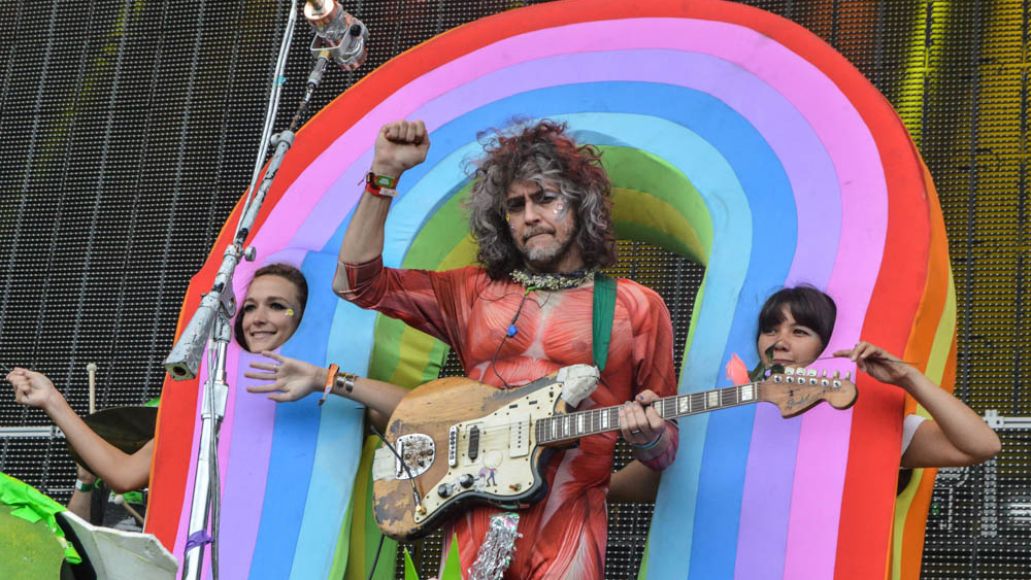 Considering Coyne’s blowup with longtime drummer Kliph Scurlock, that sounds a little hypocritical. The two had a lengthy back-and-forth about cultural appropriation, pathological lies, and broken friendship, which ended in Scurlock’s departure from the band last March. According to Coyne, that’s all in the past. “Being around Miley Cyrus has taught me so much. You choose to be above it and ignore it and let them say what they want to say. That negativity is useless. When I approach people, I let them know I’ll give whatever it takes,” he says. “If they want to call it quits, that’s fine, but I’ll keep working on it afterwards. I’m not going to change my mind.”

The Flaming Lips aren’t contrarians for the dramedy. It’s for the fun of it, and they want to remind us just how fun it is, too. The secret lies in their drive, a force of perdurable spirit tinged with acid and silly string. They’ve been the jaded punk rockers, the radio-hit wonders, the tainted experimentalists, the art pop adventurers, and the favored festival headliners. Throughout it all, they never seem to lose their appeal, and Coyne credits that to avoiding a God-like status: “It’s only music and art. This isn’t world politics. Most of it is very joyous to be a part of, and occasionally, it’s a drudge, but it’s normally fucking fun and cool, and you get to remember that you’re alive.”

Which brings us back to where we started: love. Flaming Lips fans are the first to offer you a hug and the most prepared for a spontaneous cuddle should you ask. They may be struggling to keep their drugs under control, but their hearts are large. Ask them why, and they will tell you it’s obvious: they’re mimicking the band.

“If we know what love is, we know it’s something you don’t look for. Unless you find a partner who wants to watch the same TV shows and have sex with you, that’s a different thing. To some people, that’s concentrated in this desire to love, but a lot of it’s not. They just want attention and someone to do shit with them,” says Coyne. “You shouldn’t ever be looking for it. It’s not out there in the world. It’s in us. It can only come from within. If you know what love is, you already know you have it and, you’re sponging it out of you and into this world because you find this great joy, purpose, and satisfaction with having your love be put into the world. Everybody in this world can give their love.”

The Flaming Lips frontman has long believed humans can’t survive without love. The more Wayne Coyne talks about it, the clearer it becomes he’s thinking beyond the literal. “The biggest part of love is wanting to stay alive, wanting your hair to grow, wanting to be here,” he says, picking up his pace. “It’s all mixed in there with this desire, this unknowable thing. We know it’s here. It’s so much a part of this drive that makes you alive … I’m not a scientist, and I don’t really know what’s best, but, to me, it’s this urge to be. Part of that is about wanting to be a part of the world.” After a few more minutes of discussion, it’s clear that’s The Flaming Lips’ underlying goal. They want to remind us why life’s worth it. Their rainbow outfits and glowing spaceships are more than trippy props; they’re a tangible way of projecting the capricious absurdities that guide our own hearts.

The Flaming Lips' Wayne Coyne: All You Need Is Love