Teased with the (now) karaoke favorite “Personal Jesus”, Depeche Mode’s seventh full-length release, Violator, entered into the synthpop cannon 25 years ago this past week. Consequence of Sound’s Sheldon Pearce and Derek Staples sat down to reflect on discovering the release, the album’s influence on both the band’s and the sound’s trajectory, and why Violator is far more than its familiar singles.

Derek Staples (DS): Since I am still not 30 years old, Depeche Mode’s 1990 opus, Violator, was already a bit dusty by the time my pops truly introduced me to the record around 1996. Thinking back on it, that was a pretty bold move by a parent of a 10-year-old in small-town Indiana. Unable to comprehend the meanings behind Martin Gore’s often self-deprecating lyricism at the time, I was initially drawn to the electronic/orchestral interplay during a track like “Sweetest Perfection” — which also includes some odd found sounds. Just learning how to play the cello, that track really opened my mind to the limitless possibilities of music.

After re-discovering this album over the past week and thus reigniting some old memories, I am a bit pissed at myself for rarely listening past “Personal Jesus”. That single definitely pushed Depeche Mode into uncharted popularity during the tail end of 1989, and it’s still painfully catchy, but I also feel it lacks some of the instrumental depth of other album selections. For example, following some stressful days, there was just something about the delicacy of “Waiting for the Night” that ironically landed with a new weight.

Sheldon Pearce (SP): Violator arrived over a year before I did. I wasn’t even an afterthought when “Personal Jesus” went Gold. No one introduced it to me; I stumbled upon it in middle school clicking through mp3s on file-sharing programs, trying to expose myself to anything and everything weird. No one I knew listened to Depeche Mode, and that seemed as good a reason as any to listen for a stubborn 14-year-old searching for any way to be cool. I also stumbled on Depeche Mode by clicking through channels in the late ‘90s before landing on VH1’s Behind the Music, a young music nerd rite of passage before search engines. Depeche Mode was a name I’d heard but never cared to explore to that point, but the sights and sounds funneled from my fat Toshiba TV were enough to pique my interest and curb my ADHD.

Over time, I’ve come to really love Depeche Mode and Violator in particular. I read old reviews a lot in my early teens, and I was initially steered away from Violator toward Music for the Masses by Rolling Stone. The latter is probably the better album front-to-back, but the former introduced me to so many sounds I’d never heard before: It was one of the first times I’d ever felt like I was listening to music made by robots. I agree: “Personal Jesus” is just the tip of the iceberg here, especially considering “Waiting for the Night”, which was always a standout for me as well. I’m still not entirely sure what key it’s in. It was one of the first moments I realized electronic music could exist outside of a rave. It is just one of a handful of songs that helped shape electro-rock and lay the groundwork for modern synthpop.

DS: Yes, and it also represented a new direction for Depeche Mode a decade, and seven albums, into their career. According to an NME article in ‘90, both Alan Wilder and Gore were ready for a new approach leading into a new decade. Gore even said, “Over the last five years, I think we’d perfected a formula; my demos, a month in a programming studio, etc. etc. We decided that our first record of the ’90s ought to be different.” Undoubtedly, that transformation was aided by producer extraordinaire Mark “Flood” Ellis. Just prior to joining up with the project, the dude completed works with U2, Netzer Ebb, Nine Inch Nails, Nick Cave, and Erasure. The highly textured guitar riffs, drum machines, synthesized drum patters, industrial decay, and subtle electronic flourishes that supplemented the Wilder/Gore formula were definitely honed during those sessions. Eight years later, in the early months of 1998, Flood would go on to assist The Smashing Pumpkins in their own mid-career, reflective release — the 16-track Adore. The sonic qualities vary, but the exploration into electronics mixed with acoustic guitar and piano arrangements aligns with the mentality and artistic goals of Violator. During the last few years when bands like Muse and Coldplay wanted to add some more club energy to their albums, they would have been fortunate to have such an aide.

And while the throughline into EDM is a bit hard to trace, mainly because one wonders if most EDM producers are familiar with much of the electronic music cannon outside of Skrillex and deadmau5, with Gore recently reuniting with fellow Depeche Mode founding member Vince Clarke, the connection to the techno underground is far easier to decipher. While EDM might be all about the party, the techno elite are still focused on finding that perfect sound and how it impacts a dance floor and every individual pounding that pavement. Often, especially in the minimal or down-tempo realms, that means the infusion of ambient guitar samples and isolated instrumental lines — techniques used heavily during the darker moments in the Depeche Mode catalog. As a self-proclaimed “raver,” I certainly welcome more of those live elements into clubland. 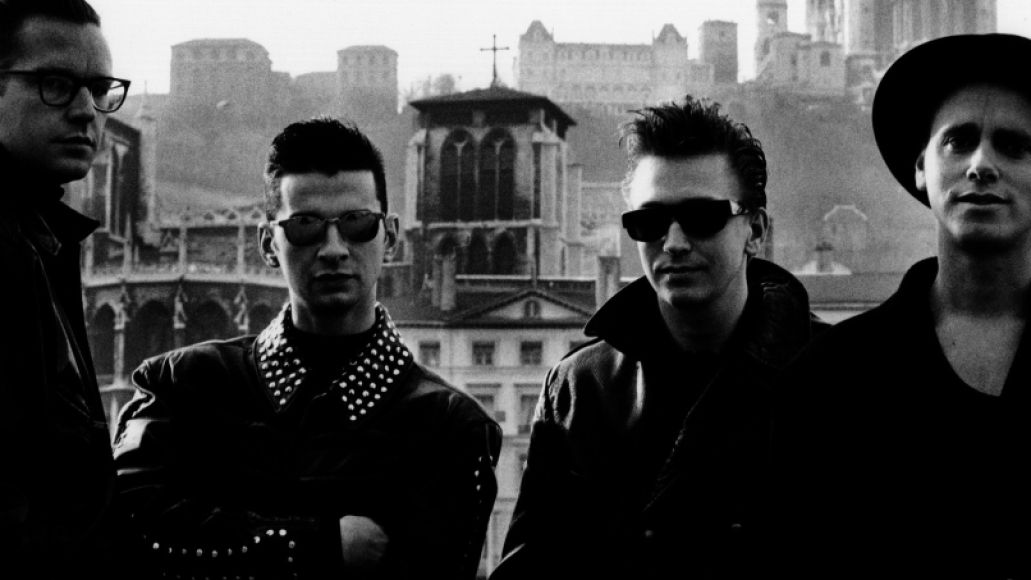 SP: Flood definitely had a palpable impact on the shaping of Violator’s refined electronic sound. Elements that were scattered throughout previous releases are far more prevalent here and often featured. It’s hard not to credit him at least partially for helping them blend into the Violator mold so seamlessly. There would’ve never been a Depeche Mode song like “Crucified” before this embrace of synths and ambient sounds. The band was much more willing to take weird turns here after scrapping their patented formula in favor of the new sound, and it produced some strange but interesting aesthetic choices like the piercing shriek of “Blue Dress” and the croaking yet elastic synth riff on “Clean”. The music is far more informed by electronic instruments than on past releases, and for the first time in the Depeche Mode canon, it carried the same amount of the burden as the pop rock.

It’s hard to get a real pulse on EDM or to state matter-of-factly that a band like Depeche Mode — or Violator in particular — helped shape the genre the way Aphex Twin helped shape IDM and ambient techno, but it’s hard to argue it didn’t play a role in dance music’s trajectory. In fact, Q magazine once referred to Depeche Mode as “the most popular electronic band the world has ever known,” and that’s probably true, if not very blatantly homer of them (Q is a British mag; Depeche Mode a British band). There may not be a direct lineage that will lead you from Depeche Mode to certain influential electronic artists of today, but the band helped redefine what it meant to make electronic music and to listen to it, and that in itself is fundamental.

The influence over hardline techno is far more apparent in the exacting and precise rhythms of songs like “Enjoy the Silence” and “Sweetest Perfection”, and the music carries the same type of energy that I’ve come to expect from the least sonically ambiguous electronic subgenre. Many moments on Violator give way to imagery of packed dance floors and strobe lights, especially because of the isolated lines, which carry many of the melodies. The songs are often heavily rhythmic and unchanging, but they never feel rooted or repetitive, and a lot of the more sinister-sounding chords and riffs have been duplicated and modified over the last few decades. Violator was the ultimate convergence of electronic elements in rock.

DS: Just hearing the word “sinister” brings me back to Marilyn Manson’s cover of “Personal Jesus”. I wonder how many teens got plugged into Depeche Mode in 2004 after hearing that track on MTV or in Hot Topic?

To reflect on that ideal of “precise rhythms,” the opening moments of this album are built directly atop a Kraftwerk foundation. But where Kraftwerk established a robotic mystique, it’s the emotional frailty within this album that remains so alluring. For example, when the melody dissolves at the 4:13 mark of the aforementioned “Enjoy the Silence” and transforms into that hidden “Crucified”, I still cannot hold back the chills. And then following the exaggerated guitar dips of “Policy of Truth”, the simplicity of “Blue Dress” is arresting. To steal a line from that track: “Something so simple/ Something so trivial/ Makes me a happy man.”

On a side note, despite the rather juvenile lyricism of “Blues Dress” — which is pretty much about watching a girl change — the preceding “Policy of Truth” alludes to secrets between close contacts. The shift from closed doors to pure transparency is quite intriguing. However, I imagine this is just a coincidence, considering Gore himself wasn’t a particular fan of the “pervy” track, but it is always interesting what one discovers after enough revisits to any particular body of work. But it seems too rare that such relatively accessible albums deserve such prolonged attention.

SP: The duality of secrecy and transparency operating in such close proximity is a lynchpin of Violator, one of the reasons it was partially received so tepidly upon its initial release, and one of the reasons it still holds up now. Robert Christgau condemned its open and honest exploration of techno as pandering to the UK’s “ecstasy-riding teens,” and in the Rolling Stone review, Chuck Eddy dismissed their curt, closed-off lyrics as a guide into a void, never explaining why they were so sad in the first place. But those two elements in tandem are what drew me to the album as a young listener years removed from those initial perspectives.

Pairing the dancier rhythms and darker sounds of electronic music with the often intentionally distant lyrics creates a gripping experience that pulls you into an echo chamber of disquieting noise. It’s a fascinating listen to this day, even amongst the crazy sounds of the modern EDM age. Rolling Stone even came around on the album (years later, as it often does) when it was added to the magazine’s coveted list of the 500 Greatest Albums of All Time. Violator may be remembered for its singles, but its wonders exist below the surface.

A case can be made for others being the best Depeche Mode album — the band arguably had stronger runs — but there probably isn’t a more important Depeche Mode album, not to the band’s catalog or to the soundscapes it would help shape. From start to finish, every sound rings true of a band searching for something new and finding something timeless.