The first time I saw The Decemberists play was in 2005 at a place called The Beta Bar (R.I.P.) in Tallahassee, Florida. It was the size of a large living room and, if not for its pedigree of indie stalwarts—Modest Mouse, Mogwai, Against Me!, and many others all played there during my college years—the venue would have been considered a bona fide dive.

But dive or faux dive, The Decemberists plowed through their set with trademark histrionics, opening with their five-part mini-epic of Irish folklore, “The Tain”, and coaxing everyone to the sticky bar floor during the quiet part of “The Chimbley Sweep”, save for one hulking bouncer who refused to play along until Colin Meloy practically begged him to. The bouncer finally shrugged, sat cross-legged on the ground to bar-wide cheers, then joined everyone in springing to their feet when the song picked up again. When the band returned to Tallahassee a few years later, they brought with them the shoddy, famous-among-fans sperm-whale puppet to be used for the climax of “The Mariner’s Revenge Song”.

These early sets always had a rough-hewn theatricality about them—the kind of “Let’s put on a show” attitude you’d see in a small-town high-school musical or community-theatre play. Picaresque fully embraced this concept, going as far to include production photos for most of the songs on the album, complete with cardboard set pieces and band members dressed as trees. At this point in their career, however, the band has graduated to more stately venues like The Chicago Theatre, a palace with the sort of neo-baroque architecture that would fit right into Meloy’s more grandiose lyrics. Finally, The Decemberists are playing venues big enough to house their ambition. 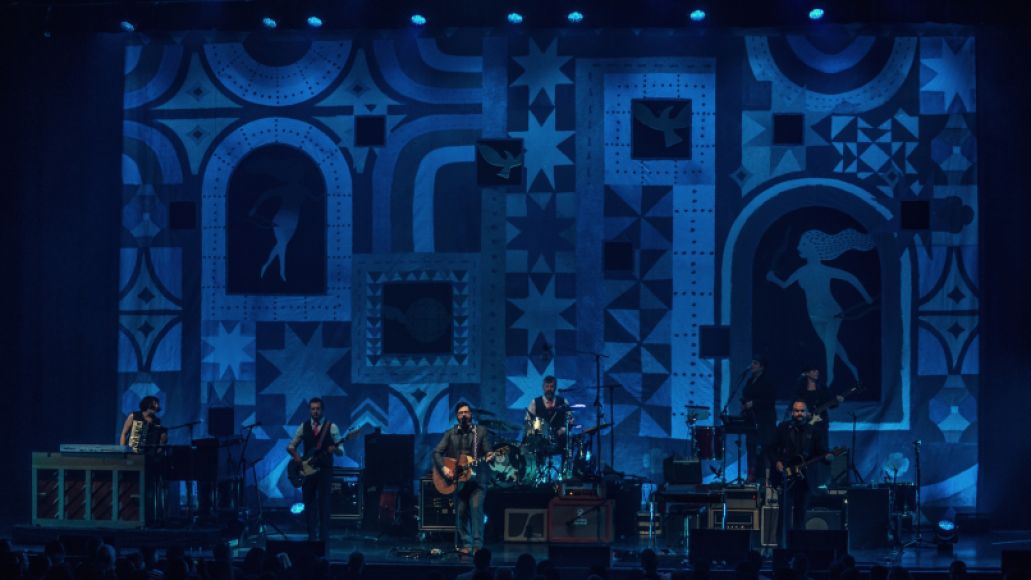 So it’s only natural that last night’s show had a decidedly more polished, nuanced approach to its sonics and visuals. Opener “The Singer Addresses His Audience” introduced the band with simplicity, Meloy standing onstage by himself in front of cutouts of the female archer from the cover of What a Terrible World, What a Beautiful World. As his bandmates joined him one by one (starting with two backing vocalists that included local musical heroine Kelly Hogan), the song exploded—with musical precision, it’s worth noting—and a backdrop with the rest of the album art glided down from the ceiling, the archers magically framed by a patchwork of orange, purple, and okra sunbursts. The stage lights brightened with the sunny horn intro of “Cavalry Captain”, and the band was off to the races without a trace of their old ramshackle aesthetic.

Even during the loose backwoods jazz of “Till the Water’s All Long Gone”, things never felt like they were on the verge of falling apart, or even veering into improvisation. “The Rake’s Song” had three floor-toms pounding exactly in sync with John Moen‘s drums, and the audience—like an obedient church choir—knew to alternately sit and stand whenever “The Island” switched parts. It was a spectacle, sure. But it was a controlled spectacle.

Then something funny happened. Halfway during the standard audience sing-along of “La dee dah…” in “Sixteen Military Wives”, the lights bumped up once more, revealing some cracks and striations in the surface of the archer cutouts. They looked homemade, as if constructed out of paper mache. There’s no way to know for certain, but this little detail seemed to indicate that The Decemberists still very much value the seat-of-the-pants jubilees of their early days. 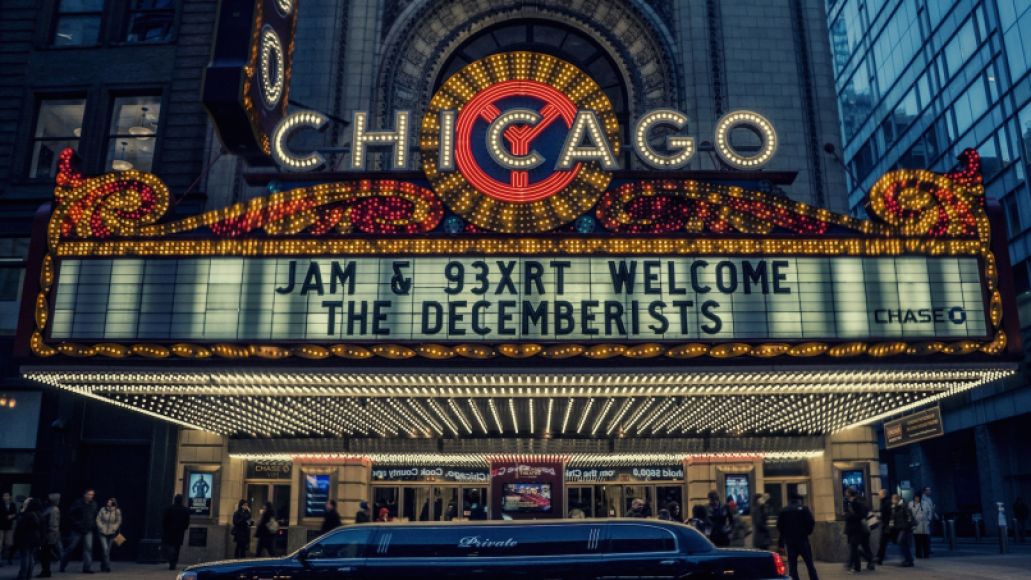 And as if to drive home this point completely, the encore ended with “The Mariner’s Revenge Song”, the whale puppet swimming on-stage with teeth vengefully chomping. As it mowed over every last member of the band, some of The Decemberists’ kids rushed onstage blowing bubbles, the backing singers retreated behind the backdrop to scream through one of its windows, and a stream of confetti burst impotently from the whale’s blowhole. Once again, a spectacle. But a messy spectacle. It suited the band’s embracement of duality on their latest record, showing that no matter what the budget is, a play is still a play.

Setlist:
The Singer Addresses His Audience
Cavalry Captain
Down By the Water
Calamity Song
Till the Water’s All Long Gone
Philomena
The Wrong Year
Make You Better
The Crane Wife 3
The Island
Los Angeles, I’m Yours
Carolina Low
The Wanting Comes In Waves / Repaid
The Rake’s Song
Sixteen Military Wives
A Beginning Song
Encore:
12/17/12
The Mariner’s Revenge Song

Live Review: The Decemberists at The Chicago Theatre (3/27)