Noel Gallagher’s second solo album, Chasing Yesterday, has had a fortunate start in life. The news barreled in with quote machine Gallagher at the wheel, bullhorn a-blazing, lampooning everyone and everything he felt misguided by: Kanye West, Maroon 5, and Alt J were all hit during interviews, and I, for one, believed the entire skit was pretty innocuous. Unless you’re discussing Gallagher’s legacy or his music, he’s a serious musician one should never take too seriously. It’s as useless as an ashtray on a motorbike if you do, as pointless as the ‘h’ in Gallagher; heck, he’s just “taking the piss,” and it’s your choice to step around it or not.

The bottom line is there’s something winningly bewitching about him. During his extensive 22-year career, he’s never released a record that hasn’t gone platinum, and two days after its release on March 2nd, Chasing Yesterday had already hit the top spot. There’s that theory that music trends — such as rock and pop — move much slower than they once did, and being dubbed as punk, Britpop, or alternative rock could make the artist feel dated. However, there’s no trend unturned now, and musicians can draw on anything online, so a Noel Gallagher solo album wasn’t ever meant to emulate his former Britpop band Oasis, but indulge in everything he was unable to do with that band. It’s revealing that the album’s best song and Gallagher’s most experimental one yet, “The Right Stuff”, is one you can’t ever imagine Oasis recording. Which makes sense because Chasing Yesterday isn’t about living in the past, but rather fully in the now (even if it includes a dozen “fucks” thrown in for good measure). 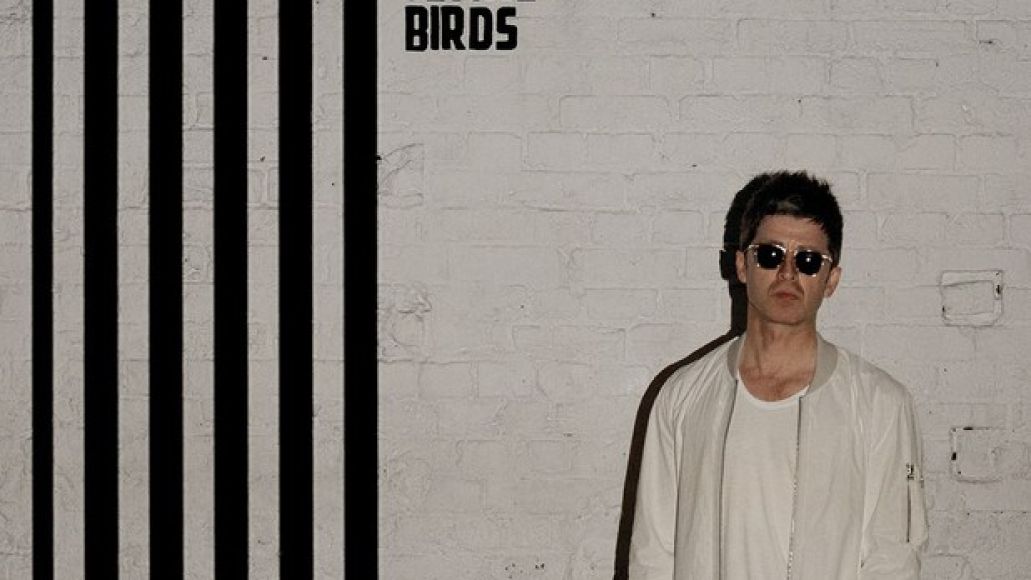 I’m not sure if you can hear me properly because I’ve gone full-techy, and you’re calling me on my Skype phone number.

Don’t do that! Your manager told me earlier that I sound like I’m stuck down a deep, dark well.

A dark well? I’d like to think you are then. That’s very exciting.

What have you been up to today?

I was out last night with my wife, and we didn’t manage to make it home until about six o’clock this morning.

Well, you don’t sound as tired as one should under those circumstances.

Right? We were at a party with Madonna, too.

Have you met Madonna before?

No, I haven’t, but my wife is a super fan, and we are friends of her manager, Guy. There was some party going on in London [Mert & Marcus House of Love party], and me and my wife went, and we got to meet the Queen of Pop.

What was the first thing you said to her?

She shook my hand, and she said, “Finally, we get to meet,” and I said “Indeed we do!” I was roaring drunk, so I can’t really remember.

You’ve been having pretty remarkable conversations with people lately, addressing some issues you might have with the state of the world. Is dealing with the music business something you can ever really get used to? Has it gotten any easier?

I beg your pardon? I think once you get to know me, you’ll think, “Fuck’en hell, god is he a remarkable man! What a guy.”

Look, who used that word in the first place? I did.

Indeed, and now why did you use that word? Because?

[Together] I’m a fuck’en remarkable man…

With an extraordinary gift.

And speaking of which, I’m really enjoying your new album. A lot of people tend to stick firmly to their comfort zone, and I feel like there’s a lot more meat on this bone.

Oh, I agree, but I have to admit it wasn’t a conscious decision at all. It just happened to be a new batch of songs that I wrote, and that’s the way they came out. If I was to contrive the idea of trying to make it sound different to the last one, it would be fuck’en awful. I write and record purely from instinct, and the songs happen to come out that way. People have asked me if I can articulate what the difference between the last two is, and I would say my last one is like a Hollywood blockbuster like Top Gun — big, shiny, and expensive — and this one is like a really cool TV series like Breaking Bad.

You’ve also gone beyond the standard range of rock band instruments on the record, which was the biggest step. On the track “The Right Stuff”, there’s this silky vocal duet-ing with Joy Rose that you’ve placed over horns, percussion, and guitar.

Ah, thank you very much, really. That song was originally an afterthought. I’d thought I’d finished the album, and then I was just recording tracks that I thought might be B-sides and started that song. Then I thought, “Wouldn’t it be great if I got a girl to sing it with me?” and then once she sang it, that’s when we put the bass clarinet on, and it just developed. I had to put it on the record because it just sounds like it’s as far removed from “Supersonic” that you’re ever gonna get.

Do afterthought songs happen to you often?

When I go into the studio, I usually have about 25 songs to choose from, and there’s usually four or five that I think are gonna make up the core of the record. With this record, I had about four or five that I thought were gonna be on the album, and out of those only three made it in the end. So when we recorded, other songs just came out better than I thought. “Riverman”, for instance, developed in the studio, and the album changed from week to week.

Which is part of the joy of the studio process. Can you imagine if you were just downright bored all the time?

Oh, god no. If I was bald, I think I might have to commit suicide.

Oh gosh, don’t say that. But in all honesty, do you have a serious fear about being bald?

I have now joined my hands together, and I am looking up to the heavens, and I’m fuck’en praying to the Lord God Almighty, please look after my hair! I’ll take cancer over baldness.

I will fuck’en take cancer over baldness. I would rather have cancer and a great head of hair than fuck’en bald and living ‘til I’m 96. I truly would.

What if I had hair-growth issues and was sitting here balding? You’d be really offensive right now.

[Laughing] I don’t give a fuck!

I know, I know. You’re basically just taking the piss all the time. Momma ‘aint no fool.

So, talking about actually getting in and writing these songs, what made it possible to return with another solo album?

I think when you’ve been in a band for 20 years and you’re making records by committee – so there’s five of you in a group plus a producer, so that’s six opinions – once you finally get into the studio on your own, you’re kind of like, “Right, now I can fuck’en relax and do whatever it is I wanna do.” Do you know what I mean? For instance, if I had written a song like “Riverman” in Oasis, the fuck’en debate that would have gone on about the saxophone would have lasted longer than the tour. In the end, you would have discussed it so much that there wouldn’t have been any point in recording it.

And that dilutes the process?

Of course, and you’re not following your instincts. You’re discussing them. So when I just think, “Right, I’m gonna get a saxophone player,” I get on the phone immediately before I talk myself out of it, and it’s done and it sounds brilliant.

Do you think success alone is something that can create confidence in a songwriter? All the success that you’ve had, I wonder if it’s allowed you to really believe that these songs are going to come out really natural and authentic.

Success and how people react to it is fascinating. Some people do not react to success very well at all. Me? I don’t think about it. I never sit and wonder why my songs are successful. I’m not interested in that or why people come and see me. I’m just doing it and living in the moment. I guess one day when I’m bald and fat and I’ve retired, I can sit in the kitchen and think, “Wow, I did some good stuff.”

You definitely don’t seem like the type of artist who sits and mulls over the things he’s said or done in the past.

I know you’re agreeing so casually, but a lot of people get stuck in what they did before, and creatively that’s quite dangerous … well, unless they’re reflecting in order to grow. It’s a fine line.

Oh, no. Absolutely. I know friends of mine who are in bands, and they fuck’en obsess about their previous work; if it was successful, did it fail, what’s our next move gonna be and all that shit. I don’t worry about that. I just fuck’en do it.

I suppose in your situation there isn’t someone dictating what music you should make or telling you what your brand should be.

Really good point. It helps that I put my own records out too, that I don’t have a record label. I’m my own A&R man, so I don’t play it to a room full of people who then have an opinion of it, then try and pull it apart. I please myself, and I’m glad I’ve done that.

… Somebody has just looked through this window and held up their hand to signify that you have five minutes left, which is such a shame.

And we spoke about baldness for so long, damn you!

[Laughs] You brought it up.

In terms of creating your own music, I think it was the British author John Fowles who once mentioned that one only has so much control over the characters they create before they take on lives of their own. Did you have a song that you started and felt it took control over you?

Oh, yes, definitely. “Riverman” started off sounding like Bob Dylan almost, and it slowed down and became like a groove. Same with “Ballad of Mighty I”. That sounded like, if you can believe, the Rolling Stones’ “Sympathy for the Devil”. Until a friend of mine put the bass on it and it went all disco, and I was like, “Ooh, I like this. This is good!”

You sound so much more passionate when you speak about your music than when you talk about the state of the world.

Have you ever thought what the heck you would do if you weren’t a musician?

I think I would be a priest.

But really, I reckon I would also like to be a scriptwriter. I could be in a team that writes TV series. I reckon I could write lines for a specific character.

You’ve got a pretty strong character

I think we’ve already ascertained that I would be, what was the word that you used? A remarkable character. I think you will have to talk to me face to face one day. Really, thank you for being so nice. I hope you get out of that well soon. I now have a queue of journalists waiting. You know how it is … showbiz, baby.