Over the last 15 years, I’ve amassed a fair share of concert memorabilia. My collection features the usual suspects in splintered drumsticks, worn out guitar picks, and beer-stained setlists, as well as a totally weird/obsessive face towel that was used and then discarded by a frontman. Well, at least I thought it was one of the stranger souvenirs lifted from a show. In terms of utter ridiculousness, nothing comes close to the bags of Kanye West concert “air” that recently popped up on eBay.

You can rub your eyes all you want, but the above absurd statement remains the same. Someone claimed to have “captured” air during a concert on Kanye’s 2013 Yeezus tour and actually tried peddling it on eBay last weekend. The initial asking price was merely $5.00, but after more than 90 bids, that number ballooned to a monstrous $60,000. The post has since been taken down, and it’s unclear if any transaction was completed.

For those looking to add a bag of Yeezus air to their epic Kanye memento closet ($350 Yeezy Boosts and nearly $4,000 Kanye jackets soon to come, no doubt), fear not — there are about five more listings on eBay at this very moment. I can’t quite tell if those sellers are absolute geniuses or idiots. Either way, it seems Kanye fans have A LOT of money to burn. 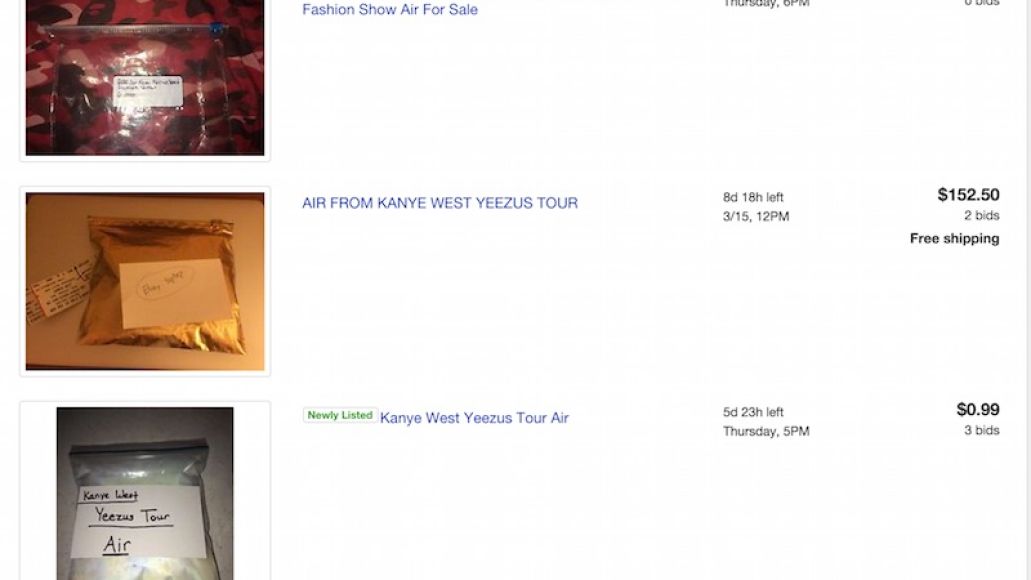