A little rain couldn’t keep Austin down. Despite the chill of wet clothes clinging to beer-soaked bones, the excitement and insanity marched on. At this point, many of us have reached a peak level of both excitement and exhaustion, so it could’ve just been that no one really was capable of doing much else.

So, into the chilly wind we walked, hitting up every venue imaginable — yes, even a public library — to check out more must-see acts. With very little festival left, that desperate “But I haven’t seen (BLANK) yet!” feeling is starting to kick in, but there’s still time left to cross those last few acts off your list. 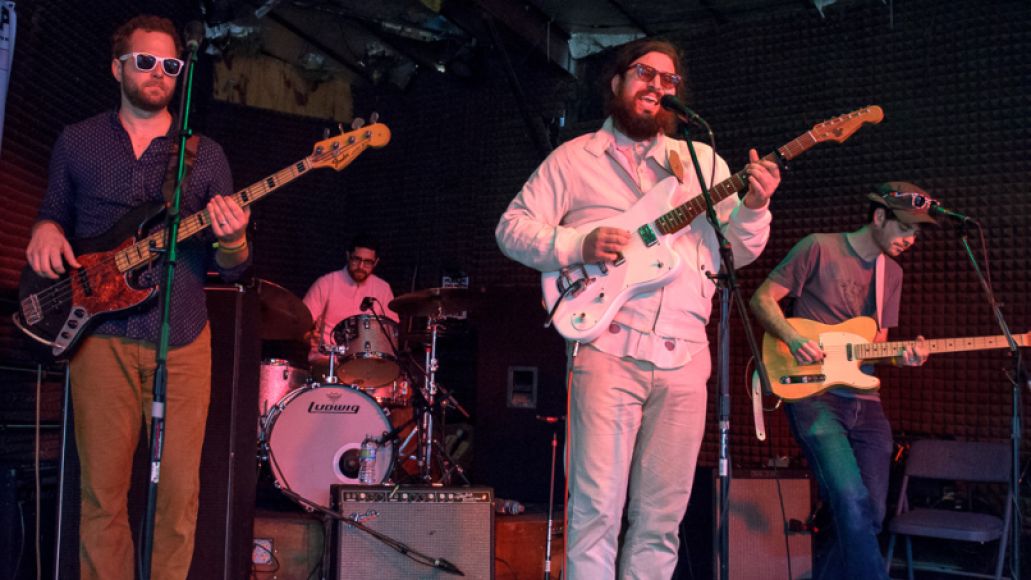 If Natalie Prass taught us anything on Thursday, it’s that a Spacebomb Records album can sound excellent even without a Spacebomb-sized band behind it. It’s no real surprise, then, that label founder Matthew E. White put on a hell of a show with only three backing musicians. Even with the scaled-down production, White’s whisper velvet voice still puts a lot of air into old songs like “Big Love” and new tracks like the dulcimer-assisted “Fruit Trees”. Like that song, most of the new Fresh Blood material that filled most of the set was given modified arrangements to work in the smaller confines of the show, many letting guitarist Alan Parker shine on solos. Closer “Feeling Good Is Good Enough” was a highlight with its “yah yah yah yah” background vocals and building choruses. The R&B jam of “Rock & Roll Is Cold” was presented best as White was able to add stank to his vocals and deliver a fun roller of a song. White joked that his seven-year-old nephew Micah now leaves the house singing the bridge, “Everybody knows/ everybody likes to talk shit.” But like White said, that’s for his sister to worry about, while he can focus on putting on smooth shows like this. –Ben Kaye 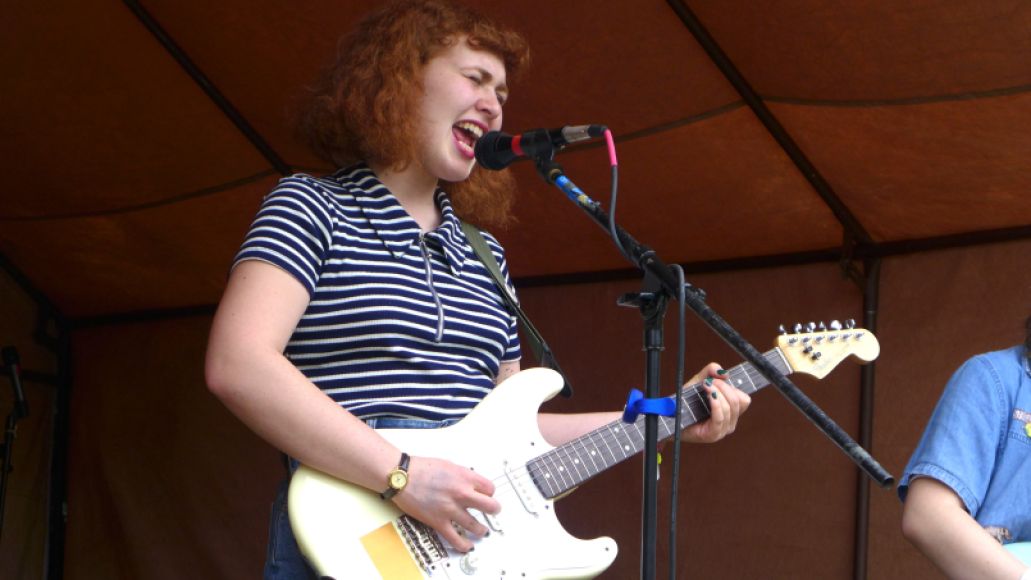 Girlpool’s forthcoming album, Before the World Was Big, mourns childhood memories with a fondness that’s too dark to be sentimental. The Philly transplants have been previewing the record all week at SXSW, and on Friday they brought their wiry duets to Riverside Farms three miles away from downtown for the first set of Portals’ unofficial showcase. Sure, these two miss being kids, but their songs aren’t exactly nostalgic. They mine that transitional space between adolescence and the process of becoming a real, full, human adult — a process most people start but hardly anyone ever feels done with. “I am working for myself and only me,” Girlpool sang during the set’s last song, “Cherry Picking”. The album is set in LA, but Harmony Tividad and Cleo Tucker both live in Philadelphia. To hear them play here in Austin, it sounded like that uprooting was a healthy one. Sometimes the best way to figure yourself out is to sever all the stuff you used to define yourself by. Sometimes the best way to honor who you were as a kid is to become somebody else entirely. –Sasha Geffen 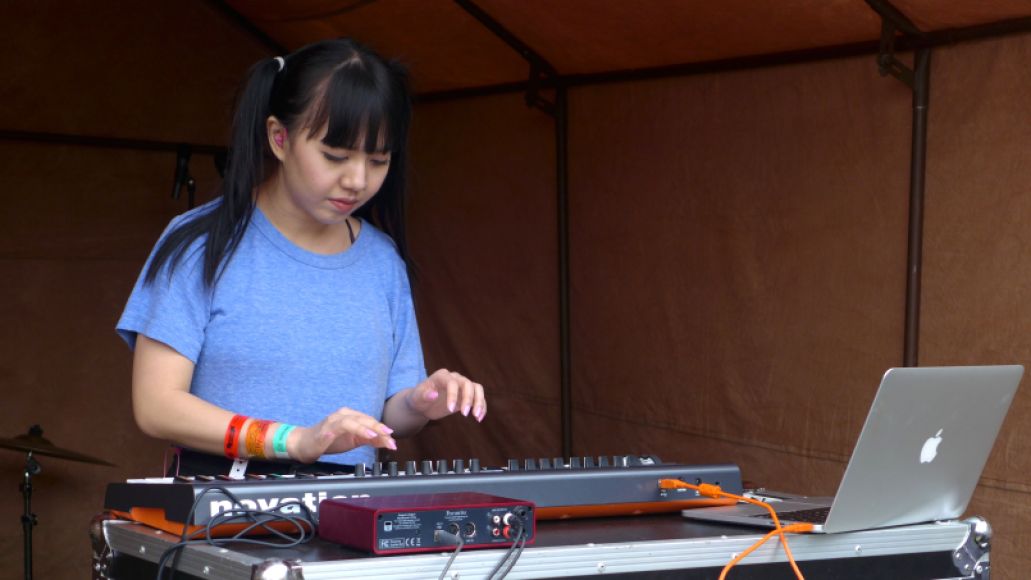 Baby goats wandered in a pen just a few hundred feet from where et aliae ran through a set of crystalline electronic tracks. Hearing dance music on a farm in the middle of the day is probably one of those experiences you rarely get to encounter outside of SXSW, and et aliae was up for the task of bringing her bright singles into the daylight. As a producer, she’s playful but not showy; her music would have fit in neatly at Thursday night’s PC Music showcase. She’s focused on the prettiness of each sound she pulls through her laptop, in how each of her patches glitter next to each other, how they move and warp through time. Towards the end of her set, she wove Foxes’ vocals from Zedd’s “Clarity” into the mix, pitch-shifted way up to an unnatural, cartoonish range. The original Zedd song always struck me as a little heavy handed. In et aliae’s hands, though, it became something sadder — the pitch lent the lyrics urgency, and the production gave the song a new sense of desperation. That’s what you want out of a DJ set — for an overplayed song to hit you like you’re hearing it for the first time. –Sasha Geffen 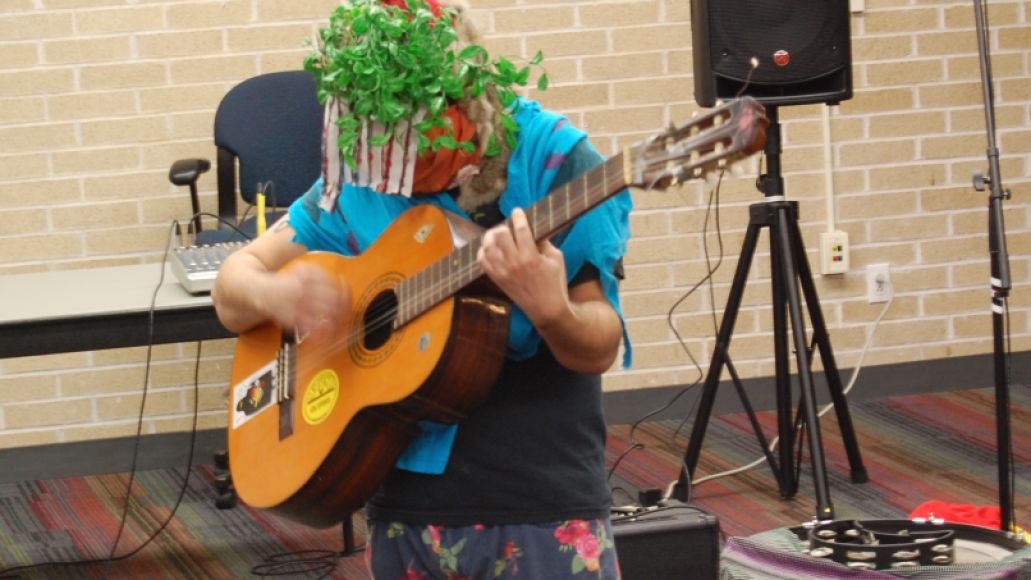 “I’d like to invite everyone into the large meeting room … It’ll be a rockin’ good time,” the genial voice announced over the public speaker system, alerting the dozen and a half parents and young children enjoying reading time, library employees, and early afternoon stragglers of the impending concert in the George Washington Carver branch of the Austin Public Library. Rather than a rockin’ good time, though, those who did wander in came across something stranger but no less enjoyable than that loud speaker promise. Local drone outfit Everything Is Melting opened the afternoon’s festivities, at first seemingly shy to break the volume barrier, as if some cartoon librarian were bound to wander in and shush them out of existence. But the duo, decked in strange masks and colorful togs, eventually built their set to a volume meant for a proper concert, layering guitar, tribal percussion, and cassette recordings in a loopy, hammock-swinging drone. As a former library employee, the fact that the Austin Public Library is stretching itself into weirdo music during SXSW is an impressive feat, and Everything Is Melting provided the homegrown talent and weirdness that the city clearly prides itself on. –Adam Kivel 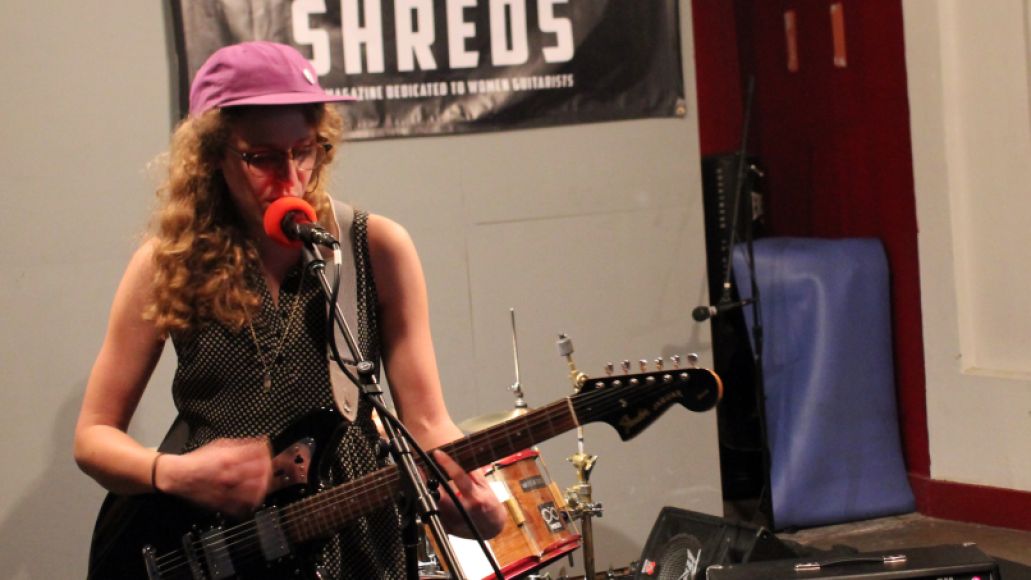 Seattle’s Chastity Belt have played something like five shows a day this week. They were visibly exhausted but fought through their set at the She Shreds Magazine showcase at the Zen Fit rock ‘n roll dojo. In fact, everybody in the place was visibly exhausted, wearing their hangovers. The band’s downbeat guitar pop felt right amongst the tired eyes and glazed faces, the sound of long days, bad romance, and sleep deprivation. There was a certain catharsis to the scene. For Chastity Belt, it’s the home stretch of a long week and a valiant promotional push for their album, Time to Go Home, which drops soon on Hardly Art. They handled it admirably. –Jon Hadusek 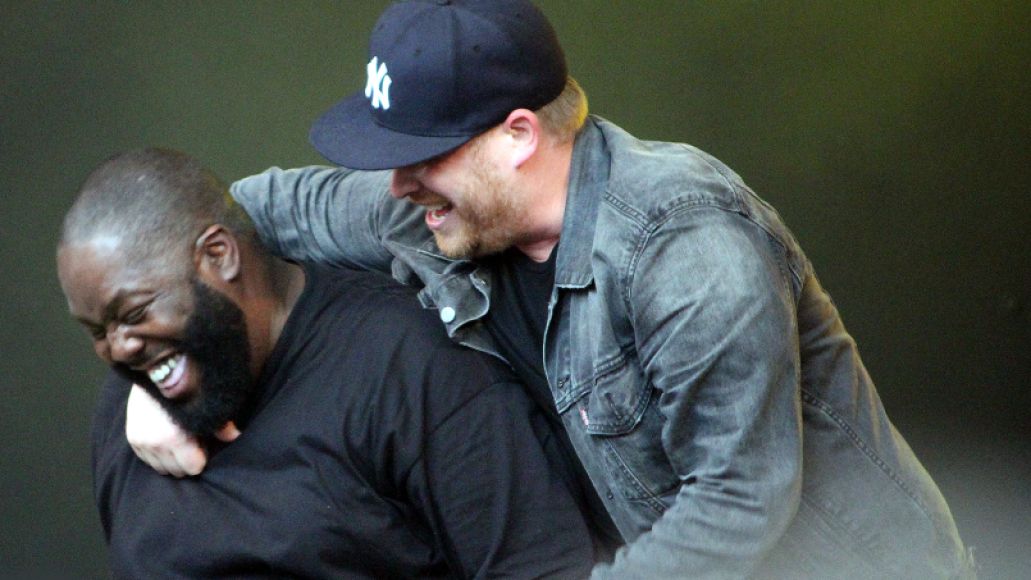 A little fighting goes a long way for Run the Jewels. Hear me out: The two hip-hop masterminds were on fire Friday evening at Stubb’s, still sizzling from a recent altercation days prior at the Spotify House, where a drunk idiot attempted to swing at ’em. (If you’ve seen the video, you’ll know it didn’t end well for the guy.) “If you interrupt us, we’ll kick your fucking ass,” Killer Mike declared, and later added: “I would like to dedicate this next song to FUCK the Ferguson Police Department.” Granted, Mike’s traditionally an energetic performer, but there was something unwieldy and primal about his energy. He stormed the lip of the stage, tossed his hands in the air, and grappled his partner-in-crime in a series of hugs. And that emotion is hardly exclusive; this is a guy whose heart beats heavy for his fans. He thanked ’em for all their love and empathy, complimented a girl’s hair in the crowd, and promised to keep the tour running as long as possible, despite any hesitations from his doctor (who also works for the Atlanta Falcons). Bottom line? Your failed fight is our big win. –Michael Roffman 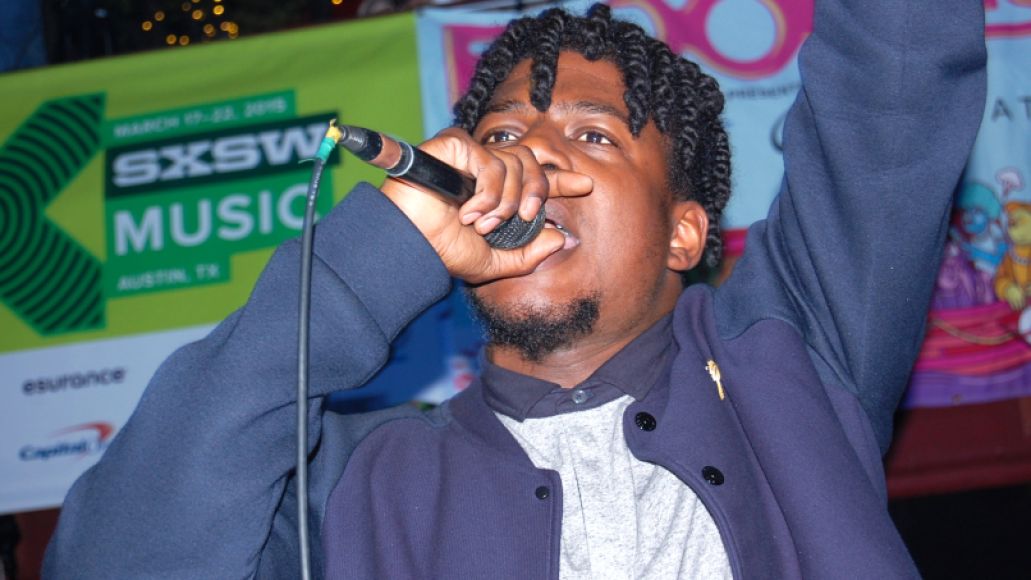 Rather than assume his skills had translated to widespread acclaim — or that the crowds in the Cedar St. Courtyard were there exclusively for him rather than setting up shop for Run the Jewels’ appearance later at the venue — Chicago MC Mick Jenkins knew he had to both clarify his persona and win people over. Luckily, his spiritually powerful message (about needing truth in your life as much as you do water) and his poetically charged rhymes more than won over the growing masses. Jenkins’ set stuck close to his excellent 2014 mixtape, The Water[s], intermittently leading the crowd in a chant of “drink more water.” It took a while to catch on, but by the time tape highlight “Jazz” finally hit that sweet spot, he didn’t need to coach anyone or goad them into joining along. With a brief, delayed set time, Jenkins turned quite a few heads and will likely get credit for more than a few individuals who start gulping down a few bottles of H2O. –Adam Kivel 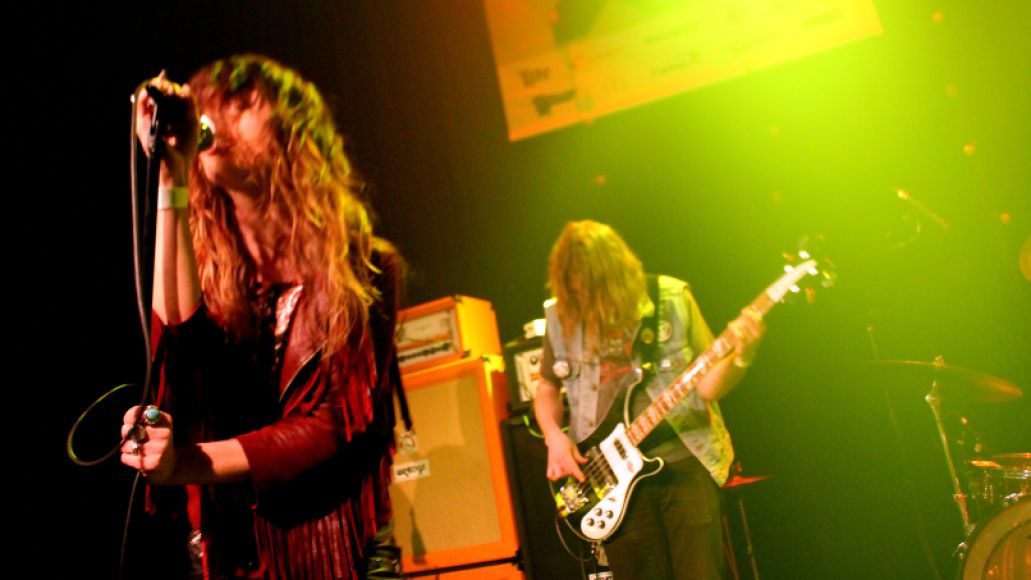 Philadelphia’s Ruby the Hatchet opened Boss Tweed Backline’s Black Smoke Conjuring showcase at the North Door, riding the hype of their latest Tee Pee Records release, Valley of the Snake. But it was a messy set, the opposite of what a rookie band wants out of their official Southby performance. Frontwoman Jillian Taylor was drunk, admitting as much, and her vocals — the defining element of Ruby’s sound — were flat and poorly mixed. Also, the mic cable had a short and kept crackling (strangely this went uncorrected for the latter half of the set). The band’s “Buckingham-Nicks gone metal” vibe was lost. Fortunately, they’ll have a chance to redeem themselves at tonight’s Heavy Metal Parking Lot II show at The Lost Well. –Jon Hadusek

Click ahead for the rest of our Friday coverage along with an exclusive gallery.