Day one of each year’s SXSW can make you feel like patient zero of an outbreak about to ravage a city. Austin’s still waking up to its incomparable weeklong music celebration; the Interactive attendees trickle out, while the music people swarm on in. Bands play everywhere. Good luck finding a street corner downtown that’s out of earshot of a power chord or a drum pattern. Once you’re in, you’re in: there’s no escape.

As the chaos set in, we caught our share of artists determined to start the week off right, some of them playing their very first SXSW sets. It’s only Tuesday, so no sign of Kanye — yet. 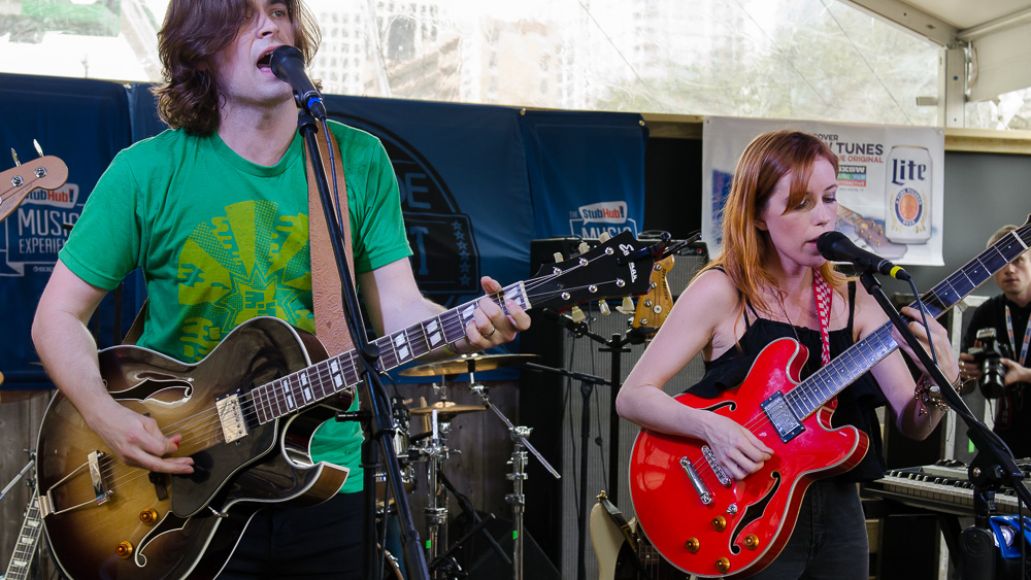 Alongside the nearly meaningless “rock” and “indie” labels, The Lonely Wild list “Spaghetti-Western Influenced Americana” under the genre section of their Facebook profile — and that really couldn’t be a more accurate description of what this LA five-piece brought to Clive Bar. They came out horns blaring like the opening credits to a Sergio Leone movie, delivering stomping indie with just hints of folk. They handled the blend deftly, comfortable and assured in what they were doing, but also playing as hard as possible. Guitarist Andrew Schneider, clad in a classic Star Wars T-shirt, stomped so hard he knocked his second guitar off of its stand. He howled along to every big belting moment; even though there was no mic in front of him, it only added to the rambunctiousness. Frontman Andrew Carroll, meanwhile, let his voice loose on the final number, “Buried in the Murder”, hitting the screaming notes with force. Indie-folk-whatever music is still a dime a dozen these days, but The Lonely Wild made theirs interesting with the Spaghetti-Western twist and confident, power-packed performance. –Ben Kaye 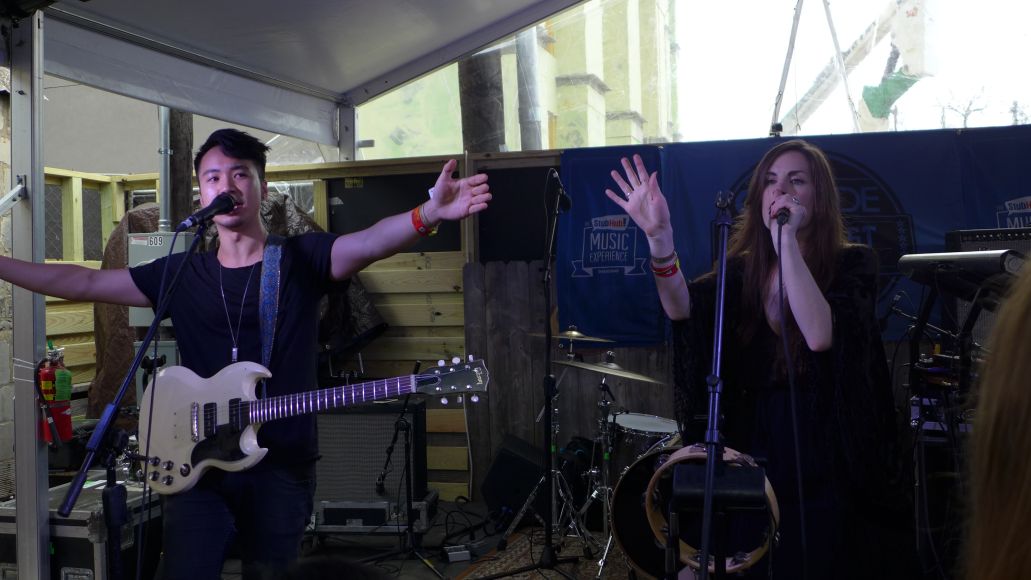 Brodie Jenkins sings with a startlingly pure and articulate voice, the kind you wouldn’t expect to ring out from a makeshift tent on a bar’s back patio as cigarette smoke left over from an English punk band still wafted in the air. As half of the San Francisco duo Cathedrals, she supplies both melody and a dark sense of theatrics to the band’s playful electronic rock. She was joined yesterday afternoon by her regular bandmate, multi-instrumentalist Johnny Hwin, plus two new players on bass and drums to flesh out the project. She wore a sheer black shawl that she toyed with as she sang, testing the space around her as she tested the newly bolstered resonance of her voice.

Cathedrals are a young band with just a couple singles to their name, but at their first SXSW set at Clive Bar they seemed eager to soak up everything around them, to learn. Jenkins makes direct eye contact with audience members, and when she does she really looks at you. From the attendees cheering and chanting the group’s name, it seemed like Cathedrals were seen right back. –Sasha Geffen 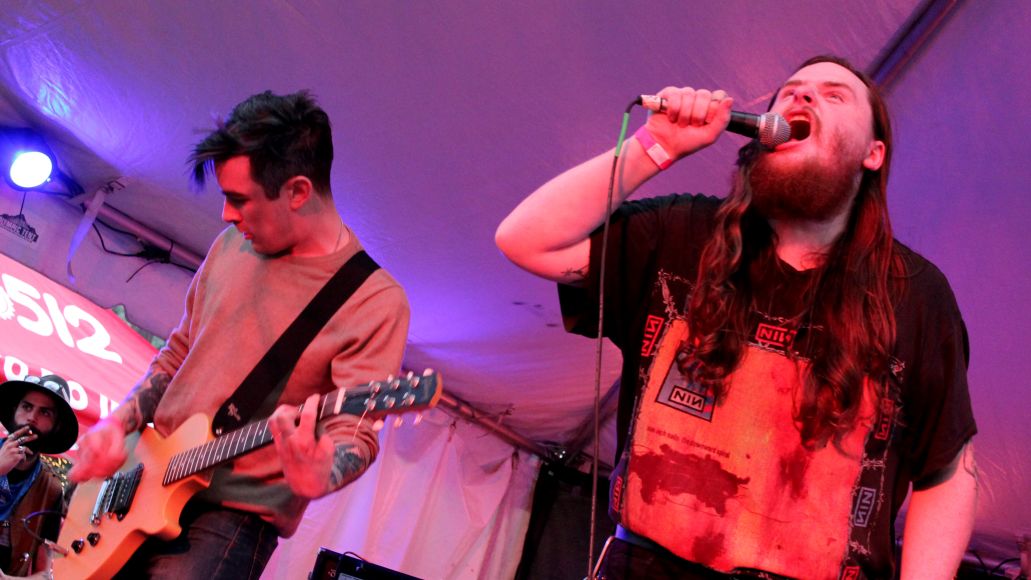 This hardcore quartet was an early surprise during Hotel Vegas’ St. Patrick’s Day Kick Off Party, startling a small (and still sober) crowd with blasts of blackened punk metal. Its members hail from different regions — some from LA, others from Austin — but their set was tight and practiced, with frontman Rusty Kelley wandering around the stage crazy-eyed, shouting derangements and climbing on guitar cabinets. They’re a band probably best seen at a dingy DIY basement show rather than a festival, but they took their SXSW appearance in stride and did exactly what every young band hopes to do when they come to this massive festival: put themselves on the map with a killer performance. –Jon Hadusek 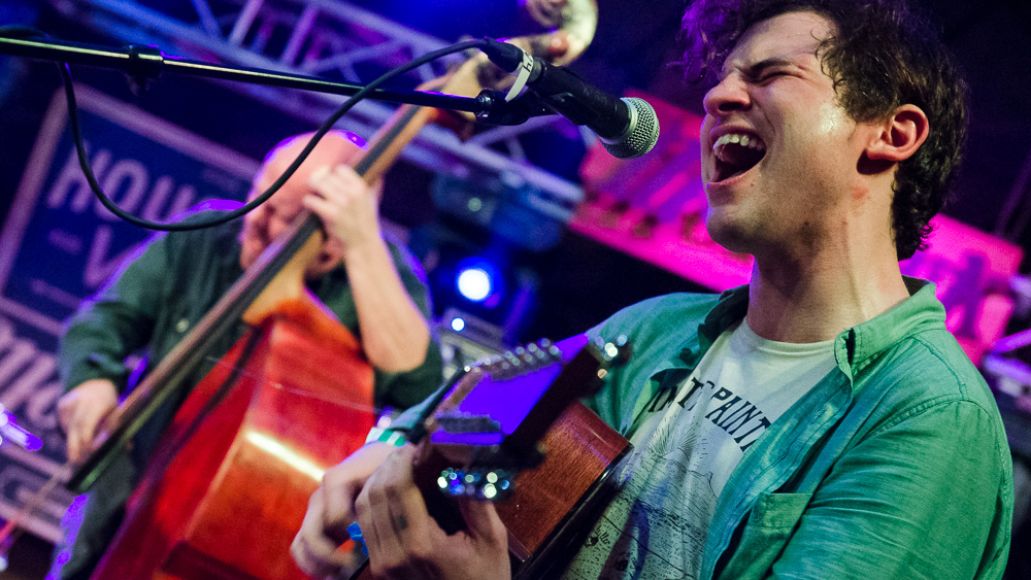 For all its otherworldliness, there was something magnificently simple about Ryley Walker’s performance. He sat cross legged on a stool stage-left, a microphone stuck to his guitar with painter’s tape, often resting his chin and lips upon his instrument. His vocal delivery occasionally left the lyrics hard to make out, but then again they were nearly meaningless in the context of the music he and his band were creating. And that’s where the simplicity became something so much more. The three-piece outfit playing with Walker deserves an immense amount of credit for creating a jazzy alt-folk sound that perfectly matched the atmosphere of his capoed strums and that field-grown howl of his. As gorgeous as all of his own numbers were, the song that demonstrated the true quality of his voice was his cover of Van Morrison’s “Fair Play”. While his own music highlighted his ability to pull out strained notes and quiet yelps, “Fair Play” let the sturdy simplicity of his voice shine as much as those deep, fluttering intricacies, showing how similar he really is to a young Van. –Ben Kaye

Leather Corduroys — Chicago Made Showcase at The Main — 8:00 p.m. 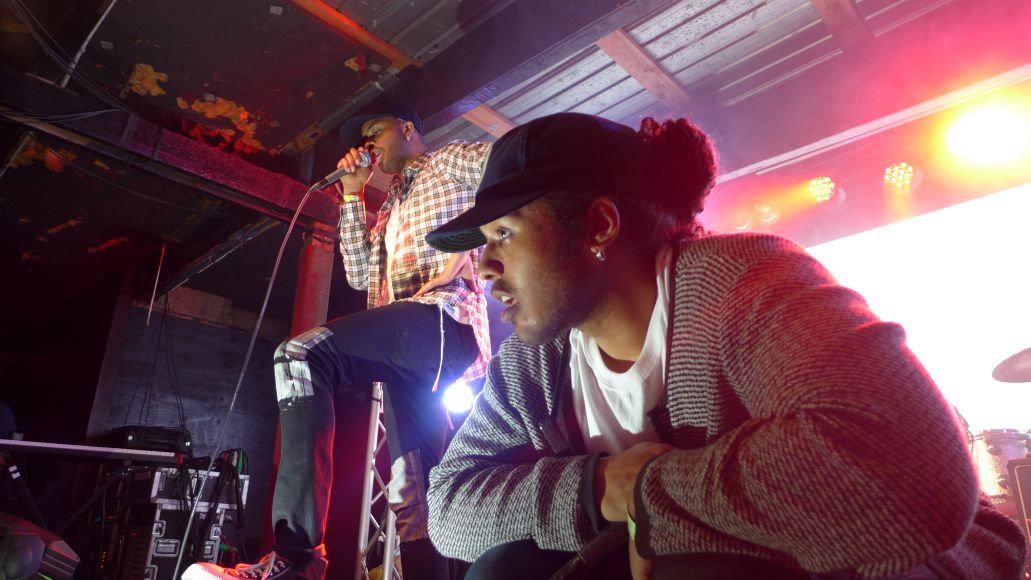 A line piled outside the Main, the legendary 6th Street venue formerly known as Emo’s, for a full hour before Leather Corduroys appeared on stage. The second annual Chicago Made showcase got off to a late start, and while the delay was never explained, the hip-hop duo’s brisk set made up for any lost time.

Leather Corduroys are Kami de Chukwu and Joey Purp, two members of the Chicago artist collective SaveMoney, which also counts Vic Mensa among its most visible ranks. They shared a fierce chemistry at the Main, their raps ricocheting off of each other in an energized display of genre subversion. Beats mutate and warp in the world of Leather Corduroys, and each MC’s lyrics complement each other rhythmically and almost harmonically. Backed by a producer wearing one of many ubiquitous GoPros on a headband, Leather Corduroys flipped our expectations before we’d even had time to develop them. What’s more Chicago than that? –Sasha Geffen

Click ahead to see the rest of Tuesday’s coverage plus an exclusive gallery.