Kanye West played a surprise show in London last night, where he not only brought out special guests Raekwon of Wu-Tang Clan, Big Sean, and Vic Mensa, but also debuted a brand new song called “U Mad”. Suffice it to say that the 28-song setlist was one for the books.

However, it’s not the only setlist floating around. About an hour or so into the concert, a lengthy fake setlist popped up on Setlist.fm, and admittedly, it took a second before we did a double take. A cover of Bernard Cribbins’ 1962 song “Right Said Fred” … ok, that’s weird, but Kanye’s been known to do weird things. “Yaya Toure” ***Googles*** So that appears to be the Manchester City soccer chant — weird he would do that, but when in London. Ah, “Gold Digger” — now, we’re getting started. Wait, a cover of Muse’s “Yes Please”???

Once in on the joke, the batshit hilarity of the faux setlist gets better with each entry: There’s a cover of Kings of Leon’s “Use Somebody”, a performance of Prince’s “Purple Rain” with surprise guest Danny DeVito, Michael Bolton makes an appearance for Deftones’ “Heads Up”, Kanye performs a Bowling for Soup song on harp, and there’s a rant about him not getting co-creator credit for Breaking Bad. And that’s just the main set.

After a full performance of Iron Maiden’s Seventh Son of a Seventh Son, the encore kicks off with a set of hardcore songs by Refused and Destroyer, followed by a second encore in which Kanye eats a Snicker’s bar and sings Cats the Musical, a third encore featuring a Beck medley sans Beck, and a costume change leading to a fourth and final encore featuring “Black Skinhead” with Leonard DiCaprio” and — our favorite — Blink 182’s “All the Small Things” during which Tom DeLonge announces he’s left Blink-182 to become Kanye West.

To the person who put an ungodly amount of time and effort into this, bravo. 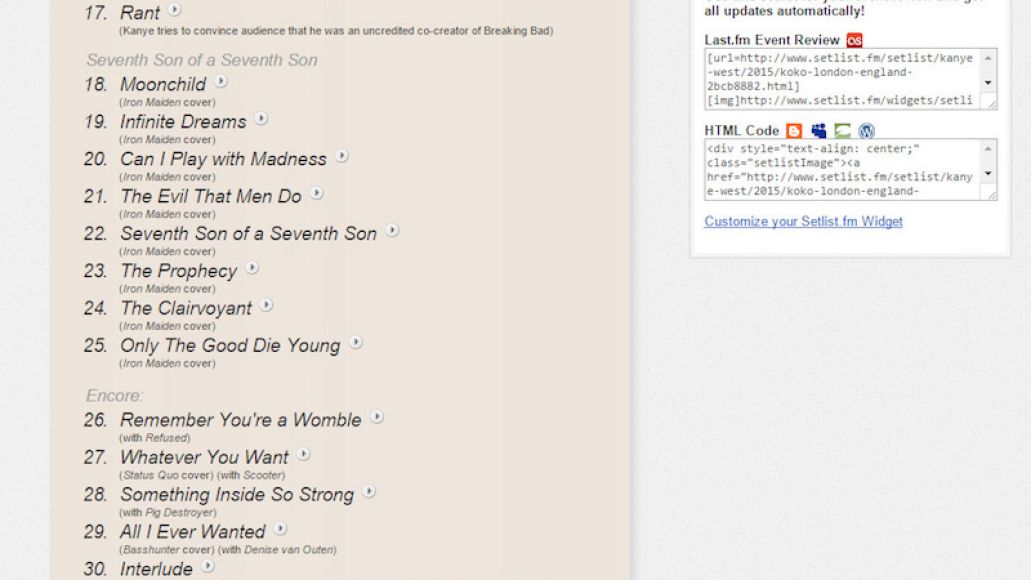 The setlist Kanye West should have played last night, but didn't