Ever wonder which movies inspire your favorite bands or how filmmakers work with artists to compile your favorite soundtracks? Sound to Screen is a regular feature that explores where film and music intersect. This time, Rebecca and Blake will take you to the hills of Austria to say happy 50th anniversary to Robert Wise’s musical, The Sound of Music.

Blake Goble (BG): Truth be told, I’ve always avoided this movie like one is supposed to avoid sweets. Pauline Kael once described The Sound of Music as a “sugar-coated lie people seem to want to eat.” Knowing it by reputation, it seemed like a song-and-dance curtain call on a very dubious bit of history. And yet, watching it for the first time last year, I was so ridiculously impressed. The sweeping vistas, Julie Andrews’ pitch-perfect and plucky voice, those damn kids and their lederhosen. Who’s to say if Sound of Music is moving, or meaningful, or even all that good?

It is memorable. And best of all, its music is insanely catchy. I may not have felt a strong connection with The Sound of Music itself, but goodness are the songs toe-tappin’, hum-inducingly good. I have a “Sound of Music” thing.

Maybe that would explain the past few days of humming “My Favorite Things” after the Oscars. How’d I miss this?

Rebecca Bulnes (RB): If I tried to estimate how many hours in my life have been spent watching The Sound of Music, I’d probably be a little embarrassed. Thinking back on how much of my younger self’s life was wasted watching this movie can be disconcerting, to say the least. Didn’t I have friends? But to tell you the truth, the grooves of time The Sound of Music cut into my lifespan never felt like a waste. I was having a good time! I was singing, dancing! The hills were alive with the sound of music, and it didn’t matter that I was in Miami and had probably never seen a hill in my life.

So sure, it’s probably not a cinematic masterpiece. Maybe it could use some editing, and maybe it’s a little too jolly to feel realistic. But sometimes you don’t need the heavy strokes of a Cronenberg or Malick; sometimes you just need to sing about your favorite things because thunderstorms are scary.

There’s got to be a reason that 50 years later we’re still talking about it. I’d go so far as to say that it relates right back to that little curly-haired Rebecca popping in that exhausted VHS tape and watching Julie Andrews with enchanted eyes. There’s one of those in all of us, right?

The songs stick and refuse to fade, and goddammit, that makes me happy. Why should we forget something with so much confidence? Its unwavering joy is infectious and as a music-loving world, we’re not bound to forget it anytime soon. 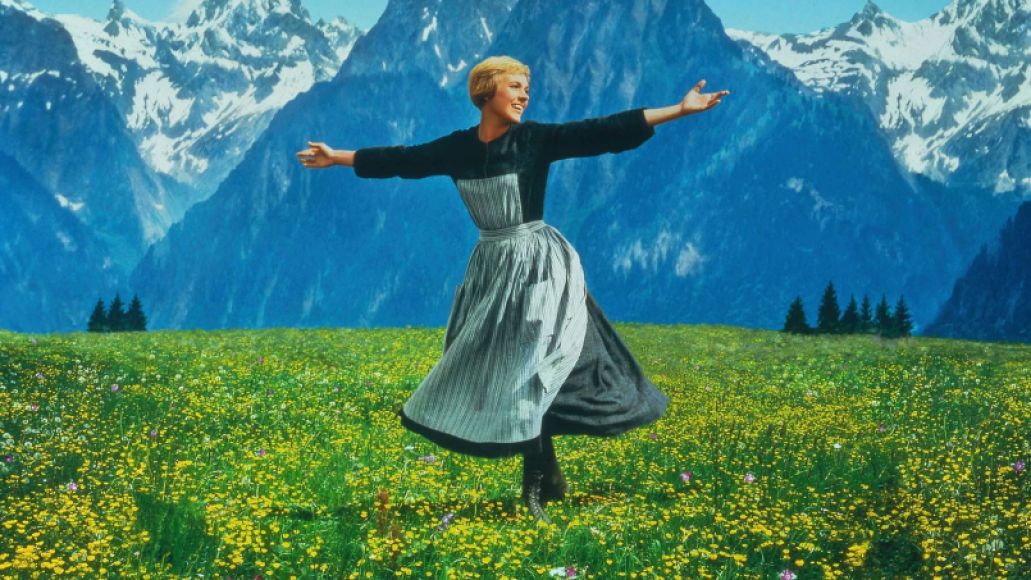 BG: Not to get to the Nazi thing too quickly, but I love that this film is a Wagnerian opus. Seriously, it’s a Gesamtkunstwerk, a total artwork that uses many if not all art forms, that strives to be an aesthetic masterwork. There’s rapturous music, picturesque visuals, classically formulaic storytelling, a culmination of pure art and beauty for the sake of, well, art and beauty. That’s right. This film ironically embraces Wagner’s notions of unified art and imagery that Adolf Hitler himself dug. I mean, the opening shots of the sky and the heavens could come straight out of Triumph of the Will. Wagner made memorable melodies, but talk about the biggest facepalm in the history of cultural misappropriation.

And yet, Sound of Music is somehow able to overcome that. There’s a reason the film became the highest-grossing film of all time, and the Rodgers and Hammerstein musical has been revived so many times. There’s a reason this is an unembarassing Best Picture winner and a deserved Best Score winner. Well, Best Music, Scoring of Music, Adaptation or Treatment. I would credit the movie’s staying power to its transcendent music. The catchier-than-thou tunes that can break through even the sternest viewers (*cough* me) and has already ensnared, what, billions of filmgoers? So what if it’s played ad-nauseam with sing-along screenings? It may be sweet kids’ stuff, but there’s not a drop of insincerity to be found.

The awkward third act with the Von Trapp family singing for Nazis at a music festival? A pristine and prim wedding for Maria and Captain Von Trapp? Singing nuns worrying about Maria and her frivolity problem? A modern critical eye can wince, but the heart wants to sing.

The moment the helicopter nearly kills Julie Andrews atop a mountain as it pulls in with swelling music and she belts out those glass-shattering notes, I was snickering uncontrollably. The first time. Then I watched it again, and well, I have trouble describing it. The control of her voice, the purity and sincerity of it all. It’s a declaration of grand intentions, proclaiming love for all that is good and pure in life. You know, extremely ham-fisted stuff. And it’s divine. There’s a reason we all went gaga for Gaga at the 87th Oscars. She tapped into a very splendorous thing, and despite her persona, the music made us nearly ignore the tattoos and elevated her voice into the heavens.

“The hills fill my heart,
With the sound of music
My heart wants to sing
Every song it hears”

What’s wrong with just singing? Belting it out with all you’ve got? Taking a moment to feel alive? God, I sound like a theater coach. Rebecca, you’ve been with this movie longer — am I nuts for just going with it? Now?

The thing is, this film has so much faith in itself. That kind of pride remains refreshing even now. It doesn’t undermine the talent that built it, isn’t shy or timid about what kind of movie it’s trying to be. That tight grip on sincerity makes it unflinchingly pure even to the most cynical eye. It has a self-awareness that doesn’t overanalyze. The Sound of Music is just so in love with The Sound of Music that you have to be too! It’s like that one totally attractive and confident friend that you really want to hate, but can’t, because they’re too damn nice.

But yeah, how about that Gaga? I’m not going to go as far as to say that her career parallels that of Julie Andrews, but they are linked by the magical thing that The Sound of Music can do: provide a platform for some true, elegant, and awe-inspiring talent to emerge. Say what you want about Lady Gaga (God knows you probably have), but there’s no denying that we all had a wee twinkle in our eyes when she hit every note with the charisma and craft that the film’s music requires. As a movie, it may be light and fluffy, but musically it ain’t messing around.

There are details, though, that do make it kind of hilarious to watch in today’s context. If we’re being completely honest here, at the crux of my total obsession I probably didn’t fully understand what a Nazi was. Therefore, I couldn’t quite grasp how bizarre that whole singing to the Nazis scene was in the midst of what my tunnel-vision brain saw to be merely a beautiful love story with songs I was convinced I could sing perfectly.

BG: Right? But it’s kind of nervy if you think about it: the power of song to protect family and humanity. Like, Maria is wonderful to the Von Trapp children in how she uses music, not to blind them, but to keep them safe against the tumult of a disparate family life, of a large-scale fascist occupation.

Perhaps that’s the brilliance of songs like “So Long, Farewell”. It’s not just an ironic ditty as they escape, but it serves to prepare the children when they flee from Austria to Switzerland. It’s functional, meaningful, and like every song in this thing, a poppy earworm. Every song’s so relatable.

RB: One of my favorite songs was “Sixteen Going on Seventeen”. Throughout my youth I couldn’t wait to turn 16 and be in love with a blonde boy, just so I could sing it and be completely authentic. Of course, by the time that happened, I soon realized Rolf’s dialogue was a little cringe-worthy and less than romantic. I mean, “Totally unprepared are you, to face a world of men,” and the whole notion of  “I’ll take care of you,” nah, no thanks. Excuses, excuses. But damn if it doesn’t still make me sway. It’s just too easy, too good at sucking you into its simple and unavoidable musical charm. When Rolf ends up as a Nazi asshole, it feels like a feminist victory. Right, ladies? Is that a stretch?

BG: Ha! Yeah, Rolf’s the worst. Thank God the Captain listened to Maria. Her sway, her ability to re-humanize the Captain really benefited those kids. That’s kind of why I love “Something Good”, as the song acts to unify the couple, and it slyly acknowledges Maria’s wonderful influence. Really, does any song not give the film some sort of divine purpose or speak to the film’s joy?

Does any song not get stuck in your head and make you wanna play guitar over a picnic in the hills?

RB: It may be, but obviously not enough to hinder its relevance. I mean, I guarantee you that “Do-Re-Mi” is still being used in music classes to teach scales. The thing is the songs flourish in their accessibility to pretty much every crowd. They’re simple enough to sing along to at a young age, but notable enough to last over time. They aren’t too tied to the story, either: strip the most memorable tracks from the Von Trapps and the Nazis and all that, and you’ve still just got beautiful songs about love and life, applicable anywhere and to anyone. If you had tuned in to Gaga’s performance without the context of the film, it would’ve been just as incredible. These songs carry the story without being exclusive to it. They truly are as expansive as the hills of Austria, seeming to go on forever, untouched in their magnificence, unassuming, yet grand.